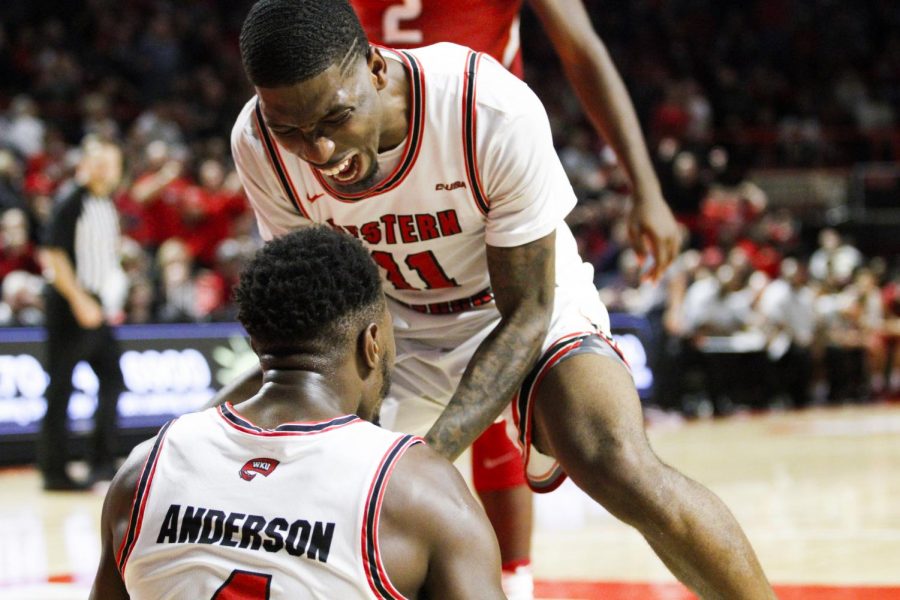 WKU guard Taveion Hollingsworth (11) celebrates with guard Josh Anderson (4) after Anderson earned a trip to the free throw line. The Hilltoppers defeated the Razorbacks 86 - 79 in Diddle Arena on Saturday, December 7, 2019.

The WKU men’s basketball team will travel to the Cayman Islands next fall and play in the fourth annual Cayman Islands Classic, the program announced Wednesday.

The event will take place from Nov. 23-25, 2020, in John Gray Gymnasium in Grand Cayman, Cayman Islands.

The eight-team tournament will feature a single-elimination format, with each team having the chance to play three neutral-site games. Opponents and a full bracket will be released at a later date.

Four Power 5 programs will be joining the Hilltoppers on the hardwood in the Cayman Islands, as Kansas State, Oregon State, Miami and Mississippi are all in the field.

Since the beginning of the 2017-18 basketball season, WKU has posted an 8-4 record against Power 5 programs, including an 86-79 overtime victory over Power 5 Arkansas on Saturday.

Along with the four Power 5 teams joining WKU in the islands, Nevada, Northern Iowa and La Salle will also be playing in the tournament.

While WKU is 23-20 all-time against the teams in the field, the Hilltoppers have yet to face Oregon State in any competition. If WKU and the Beavers meet up in the Cayman Islands, it would be the first time the two schools have faced off in program history.

Located in the western Caribbean Sea, an hour from Miami, the Cayman Islands comprises the three islands of Grand Cayman, Cayman Brac, and Little Cayman, located south of Cuba and northwest of Jamaica.

This will be the latest in a string of tropical locales for the Hilltoppers. After taking a foreign tour to Costa Rica in August 2017, WKU has competed in the Bahamas, Myrtle Beach and the Virgin Islands in regular-season tournaments before heading to the Cayman Islands next year.

For more information about the Cayman Islands Classic, visit caymanislandsclassic.com.