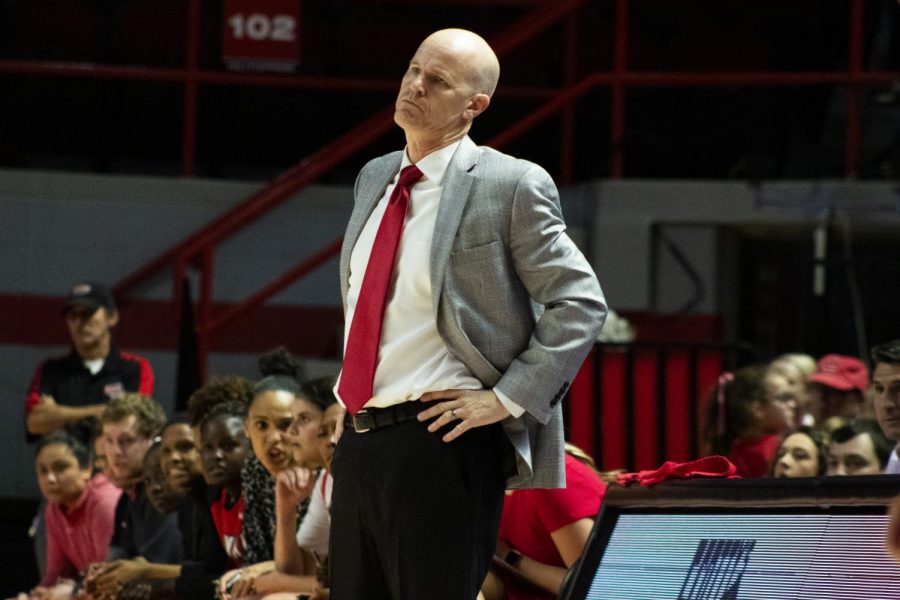 WKU Coach Greg Collins reacts to a call. The Lady Toppers defeated the Chippewas 93 - 58 in Diddle Arena on Sunday, November 17 2019.

The WKU women’s basketball team (8-3) wrapped up both non-conference play and the 2019 calendar year on Wednesday afternoon, as the Lady Toppers were trounced in a 67-50 road loss against Power 5 opponent Purdue (8-3) in Mackey Arena in West Lafayette, Indiana.

The Boilermakers were the third and final Power 5 school on the Lady Toppers’ tough non-conference slate, and WKU fell to 1-2 against those foes.

Purdue continued its run of dominance at home this season, as the Boilermakers extended their winning streak in Mackey Arena to 5-0 on the year.

WKU struggled to score the ball all game long, as the Lady Toppers shot just 34% from the field, 24% from behind the arc and 67% from the charity stripe.

The Lady Toppers had only two players score in double figures and were bested by the Boilermakers in every major statistical category except steals and blocks.

Junior forward Raneem Elgedawy added another double-double to her resumé with 15 points and 10 rebounds for the Lady Toppers.

Purdue shot 43% from the field, 31% from three and 70% from the free-throw line. The Boilermakers led for 31:47 and outscored WKU in every quarter except the second.

Purdue outrebounded WKU 44-28 and outscored the Lady Toppers in points off turnovers 20-9 and points in the paint 28-26 over the course of the game.

WKU has dominated these statistical categories all season, and Lady Topper head coach Greg Collins will likely attribute this tough loss to his team’s inability to control the paint.

Senior guard Dominique Oden played bigger than her 5-foot-8-inch stature all day, as she dropped in 14 points and grabbed nine rebounds. Junior guard Tamara Farquhar scored 11 of her own and collected seven rebounds in 28 minutes.

Purdue controlled the opening tip, and the game’s first two possessions were sloppy ones for both teams. The Lady Toppers and the Boilermakers turned the ball over on their first two trips down the floor, but Purdue was able to strike first with a short jumper at the 8:44 mark.

Following the Boilermaker bucket, WKU ripped off a quick 9-2 run to snatch an early five-point lead and grab the early momentum. During this stretch, the Lady Toppers made five of their first six shots and scored three of those buckets in the painted area.

The Lady Topper lead was short-lived, as Purdue clawed its way back with a 10-0 run of its own to take a five point lead with 0:52 left in the first quarter.

The Boilermakers sparked this run with exceptional play on the defensive end, as they did not allow a WKU bucket for the final 5:26 of the quarter.

Oden knocked down a jumper just before the buzzer, bring the Boilermaker lead back to five and helping her team end the opening quarter on a 12-2 run.

Oden followed up her solid first period with a hot start to the second as she hit a deep 3-pointer and a short jumper in the lane to push her point total to nine on six shots from the field.

Following the 5-0 mini-run by Oden, Purdue went cold from the field and allowed the Lady Toppers to fight their way back into the game.

Creech and Elgedawy attacked the lane for the Lady Toppers and went on a 6-0 run to shave the Boilermaker lead down to two with 5:05 left in the second.

Redshirt senior guard Alexis Brewer then came in and had an immediate impact, draining a huge 3-pointer to give WKU its first lead since the 2:33 mark in the first.

Her shot extended the WKU run to 9-0 and brought the score to 24-23 in favor of the Lady Toppers with 4:35 remaining in the half.

During this run, Purdue did not score for 4:31, but the Boilermakers were able to pop the lid off the basket and reclaim the lead just 23 seconds after losing it. Purdue then went on a 6-0 run to bring its lead back to five with 2:46 remaining in an exciting second quarter.

WKU responded yet again with a short 4-0 run to cut the Purdue lead to one with 2:13 left, but the Boilermakers were not done. Oden stepped up and hit another buzzer-beater before the break to push the Purdue lead up to three going into the halftime break, 31-28.

Purdue outrebounded the Lady Toppers in the first half 20-12 and turned their eight offensive rebounds into 10 second chance points.

WKU had a strong second quarter and outscored the Boilermakers 15-13, but the Lady Toppers had more work to do on the glass in their quest to pass a tough non-conference road test.

The second half started slowly, as neither team scored until Abdelgawad hit a three at the 8:19 mark in the third. This 3-pointer tied the game at 31-31, but Purdue answered 47 seconds later to break the tie.

The Boilermakers went on a 10-3 run by attacking the rim and hitting a big 3-pointer to bring their lead to seven going into the media timeout with 3:45 left in the third.

McLaughlin scored seven of the 10 Purdue points during this run, pushing her point total to a team-high 12 for the game.

WKU could not find its stroke in the third and struggled to score inside and out. The Lady Toppers scored only eight points in the quarter on 14% shooting from the field.

The only Lady Topper buckets came from Abdelgawad, who hit two 3-pointers in the frame, and Brewer, who added two points of her own from the free-throw line.

The Boilermakers outscored WKU by 10 points in the period and saw their lead swell to 13 going into the final 10 minutes of action. They shot 54% from the field in the quarter and held all the momentum going into the fourth.

Both teams came out trading buckets in the first minutes of the fourth quarter with neither side gaining ground. But Purdue soon broke free and went on a 6-0 run to push its lead up to 16 going into the media timeout with 6:17 left to play.

The Boilermakers went on an 8-1 run to push their lead to 20 points with 1:44 left in the game, and they held on for good, winning by a 17-point margin.

Creech and Elgedawy proved to be the only bright spots for the Lady Toppers, as the duo upperclassmen were the only WKU players to score in the decisive frame.

Following the loss, the Lady Toppers will get about two weeks off before hitting the road again for their next two games to begin Conference USA play.

North Texas held tough last season, splitting both games with WKU, but the Lady Toppers hold the all-time series lead with a 20-7 mark. The Mean Green finished eleventh in the C-USA standings last season and were predicted to finish seventh this season by league coaches.

Rice defeated WKU twice last season, knocking the Lady Toppers out of the C-USA Tournament in March. The Owls went on to claim their first C-USA Tournament championship, and Rice was projected to win the conference once again in the preseason poll.

Both games will be streamed live for ESPN+ subscribers.