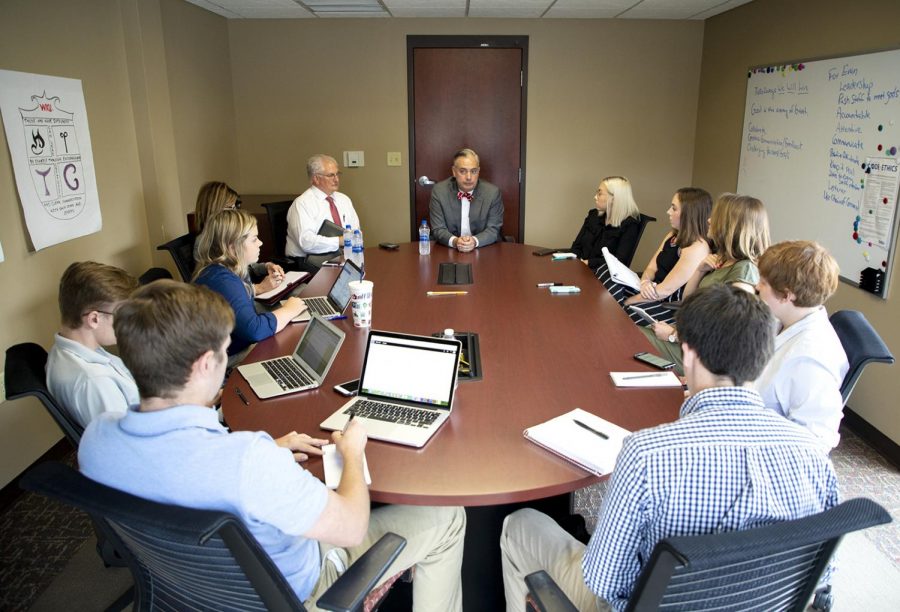 President Timothy Caboni sits down with the editorial board at the College Heights Herald discussing upcoming news for next semester on Aug. 24. at Student Publications.

2019 was a big year for the College Heights Herald. Before the new year, we’ve reflected back on the stories that left an impact or remained important to this campus. Read our top picks in news, life, sports and opinion below.

During the last weeks of the Spring 2019 semester, campus erupted after Potter College Dean Larry Snyder’s resignation was announced. Students protested the decision outside administrative buildings and within a week faculty members passed a vote of no confidence in former Provost Terry Ballman which resulted in her resignation. Read more here:

WKU students and activists brought global climate issues to campus this year by holding two climate strikes in the Fall 2019 semester. These were inspired by the global wave of climate strikes. Read more here:

Campus discussion and activism was alive after two videos showing sorority members from Alpha Xi Delta and Chi Omega singing a racial slur were reported on by the Herald. After we reported on the videos some students, including SGA senators, held a protest calling for the removal of AXiD from campus. A third video showing members of Alpha Tau Omega was reported on later in the semester, which prompted action from the administration to evaluate Greek organizations. Read more here:

Through WKU President Timothy Caboni’s 10-year strategic plan the university held a Comprehensive Academic Program Evaluation for all programs. At the end of the evaluation, programs were suggested to be maintained, grown or enhanced, transformed or suspended. By the end of the process 101 out of 380 programs were recommended for suspension. Read more here:

After a long and heated campaign season, former Attorney General Andy Beshear unseated former Gov. Matt Bevin in the gubernatorial election. However, the election process was not so simple. The day before the election President Donald Trump held a rally in Lexington encouraging attendants to vote for Bevin and a straight Republican ticket. On election night as many news sites were calling the election in Beshear’s favor, Bevin refused to concede and requested a recanvass. Read more here:

On the day former President George H.W. Bush died, WKU alum Evan Sisley was by his side. Sisley went from photographing the White House as a photojournalist, to working on an ambulance in Bowling Green, to serving with the Marine Corps, to finally working as the personal aide to H.W. Bush. Read more here:

We’ve all driven in a Lyft or Uber before, but how many drivers have tried to have a real conversation with you? We reported on WKU alum Larry Duncan who has created an instagram page and podcast dedicated to the passengers he meets as a Lyft and Uber driver. Read more here:

For the first time, the Herald published a story entirely in Spanish. Two Herald reporters attended Bowling Green’s Fiestaval and wrote about their experiences, one in English and the other in Spanish. Read more here:

We all have probably seen WKU police officer Tim Gray on campus. We wanted to know what it was like to workout with him. One reporter woke up for a 6 a.m. workout and conversation with the officer. Read more here:

One of our reporters told the story of Jonathan Fowler, one of the six award-winning artists at the State Street tattoo shop, Solid Gold Gallery. In 2019, Fowler celebrated his 20th year tattooing and attributes his success to the way he interacts with customers and the people he meets. Read more here:

Former WKU men’s basketball head coach Ray Harper and former WKU basketball player Marlon Hunter were mentioned in a lawsuit that alleged Hunter was expelled from WKU over “sexual misconduct,” and that Jacksonville State University covered up a sexual assault committed by Hunter.

After a rocky start to the 2019 season, WKU emerged victorious against Western Michigan in the First Responder Bowl and picked up its ninth win thanks to a 52-yard field goal attempt from freshman kicker Cory Munson, who’d posted an up-and-down campaign to that point. Read more here:

After an incredible 2019 season, the WKU volleyball team fell to in-state rival Louisville for the second time during its record-breaking campaign in the NCAA Volleyball Tournament Second Round. Still, the team and head coach Travis Hudson remained optimistic. Read more here:

WKU men’s basketball center Charles Bassey dominated headlines throughout the 2019 calendar year, racking up honors from Conference USA and several national entities. After becoming just the second player in league history to win both C-USA Freshman of the Year and Defensive Player of the Year in the same season, the NBA Draft prospect returned to WKU for his sophomore season. Bassey was off to a great start once again, but he suffered a season-ending injury. Read more here:

Former WKU right fielder Jake Sanford was the 105th overall pick in the 2019 MLB Draft, as the New York Yankees added the C-USA Player of the Year to their farm system in the third round. Sanford’s selection was the the fourth-highest Hilltopper ever taken, and only the fourth WKU player ever drafted in the top three rounds of the MLB Draft. Read more here:

In the Fall 2019 semester WKU announced a partnership with an institution of higher education in China, Shaanxi Normal University (SNNU), that will allow WKU and SNNU students to transfer between universities and complete degrees in psychology, education and/ or journalism. Considering the suppression and governmental control of media, the editorial board argued WKU should not share the same ideas and values, and should not endorse programs backed by an authoritarian government. Read more here:

After the sudden resignation of Potter College Dean Larry Snyder, students and faculty expressed their dissatisfaction through protest and a vote of no confidence in the former Provost Terry Ballman. This led to Ballman’s resignation and Snyder’s reinstatement as dean. However, Ballman would remain at WKU for a year making a one-year salary of $255,000, with no responsibilities or potential benefits for the university. The editorial board argued this was a “irresponsible” decision considering the university’s budget crisis. Read more here:

After the Herald’s coverage of two videos showing sorority members singing a racial slur the editorial board argued it is never tolerable for white people to use this slur, no matter the context, because of the history of violence and oppression associated with it. Read more here:

On the Herald’s 94th birthday, our editorial board recognized the strengths of student press and the remaining barriers young journalists face, focusing on the two-year anniversary of WKU’s lawsuit against the Herald over access to public records involving faculty sexual misconduct. Read more here:

Following WKU’s decision to end it’s relationship with the Confucius Institute, the editorial board came out in favor of the decision while also criticizing the original 50-year lease signed by former WKU President Gary Ransdell. Read more here: