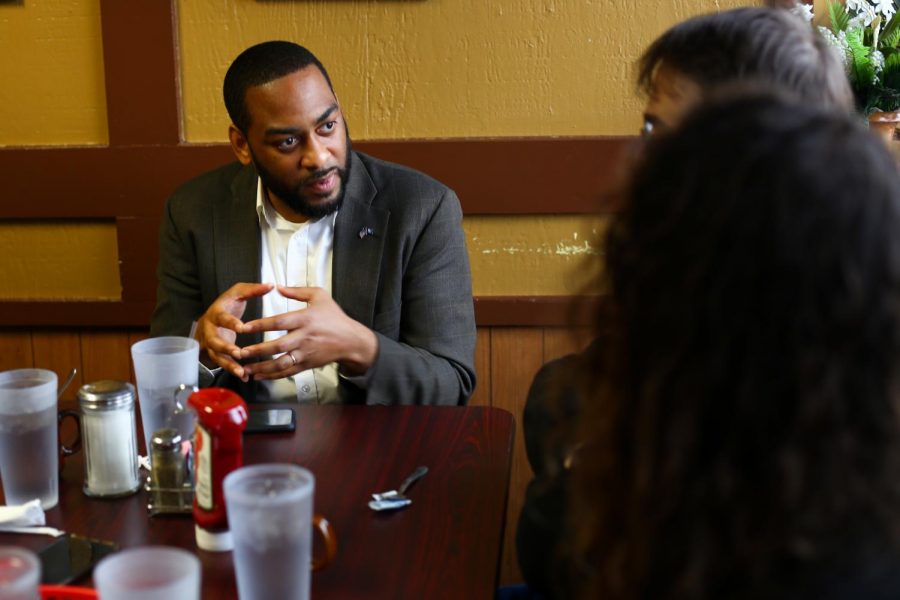 Representative Charles Booker speaks with the Sunrise Movement about his projection for a run for senate and climate change at the Lunchbox Cafe on Dec. 6, 2019.

The Bowling Green chapter of the Sunrise Movement officially endorsed Kentucky State Rep. Charles Booker on Friday for his projected Senate run against incumbent Mitch McConnell. After the endorsement, the organization held an on-campus strike, adding WKU to a list of thousands of other educational institutions participating in the global climate strike.

Booker is a supporter in the Green New Deal, and if he decides to run, it will be one of his main platforms in his Senate campaign.

Booker is looking to be a new face in the Senate and to change the way American politics functions.

The Sunrise Movement said it endorsed Booker because of their interlocking views on the Green New Deal and climate change. Sunrise Movement’s national endorsement was finalized on Thursday Dec. 6.

“Let’s work together to introduce some ideas of how this can move at the state level. I’d love to work with you [Sunrise Movement],” Booker said. “This is our survival, I’m in.”

Booker was elected into the House of Representatives on Nov. 6, 2018, after gaining over 76% of the vote. He previously ran for Senate in 2016.

Along with the Green New Deal, Booker is in support for poverty reformation and pollution awareness.

“So many families are struggling from generational poverty, water pollution,” Booker said. “We’re going to get Kentucky to take a stand together.”

Booker and his team are rejecting money from the fossil fuel industry.

After Sunrise Movement’s official endorsement of State Representative Charles Booker, the organization conducted an on-campus climate strike that started at Cherry Hall and ended at the Warren County Justice Center.

The signs displayed messages such as: “New Green Deal – Our Lives Depend On It” and “What Side Are You On?”

“It is more about raising awareness to things that bigger companies are doing to the environment,” said WKU sophomore Cassidy Howell.

Strikers chanted, “We fight for what? For our future! That’s all we got!”

Claire Kaelin, a WKU student, led most chants before the walk to the Warren County Justice Center.

Multiple organizers from Sunrise Movement and strikers called for McConnell to support the Green New Deal.