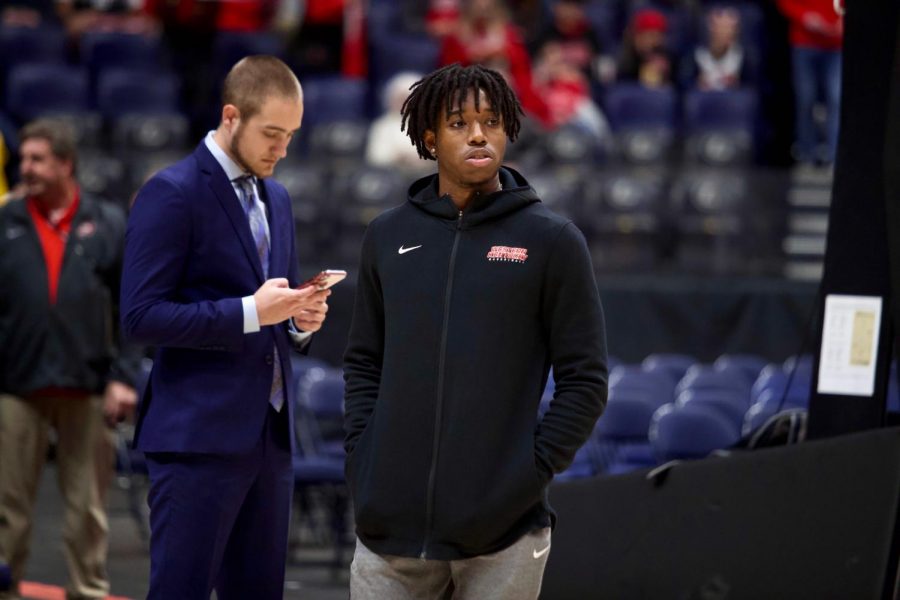 WKU senior guard Kenny Cooper looks toward the floor while his team warms up to play against the Cardinals. The Cardinals defeated the Hilltoppers 71-54 in Bridgestone Arena on Sunday, Nov. 17, 2019, in Nashville.

When it rains, it pours.

“WKU senior guard Kenny Cooper’s appeal for a waiver for immediate eligibility from the NCAA has been denied. He will not be eligible this season,” the program wrote in a statement.

The senior must now sit out this season per transfer rules and will not be able to play for the Hilltoppers until the 2020-21 season.

Cooper was one of the final NCAA Division I men’s basketball players to receive a waiver ruling, and he was also one of several transfers to have their eligibility requests denied.

Cooper played his first three years of college basketball at Lipscomb, where he appeared in 100 games, started 67 games and helped the Bisons win 72 games during his time in Nashville.

In his junior campaign, Cooper averaged 9.8 points, 4.5 assists, 3.5 rebounds, two steals and shot a career-best 36% from 3-point range on a 29-win Lipscomb team that won the 2019 Atlantic Sun regular season and made it to the NIT Championship game.

The Nashville native averaged 8.9 points per game during his time at Lipscomb with 381 career assists. Cooper also recorded 184 career steals, which ranked him 44th in the nation during the 2018-19 season, according to Ken Pomeroy.

Although transfers are typically forced to sit out a year at their new schools, Cooper told college basketball insider Evan Daniels that he wasn’t planning to sit one to play one.

“Cooper said that he plans to appeal to be eligible right away because of the coaching change at Lipscomb,” Daniels wrote in a tweet posted on April 15.

Cooper soon selected WKU as his next destination, and he officially signed with the Hilltopper basketball program on April 24.

“We’re excited to have Kenny join our program,” head coach Rick Stansbury said in a press release at the time. “He’s a high-character young man from a great family. He has the valuable ability to make players around him better, and he’ll bring a wealth of experience and toughness to our team.”

The rising senior arrived on the Hill with one year of eligibility left, but the program was forced to wait months while a ruling from the NCAA on Cooper’s status was being processed.

Stansbury was confident in regard to Cooper’s eligibility when the Hilltoppers started practicing this fall, and the WKU head coach said he was expecting to see Cooper on the floor soon.

“Well, I’m anticipating Cooper having his [eligibility],” Stansbury said on the first day of practice. “We’ll practice that way and plan that way, I’m not going to plan on the backside. Cooper gives you experience and he’s a quality person. He’s had some experience at the point guard play. I think he can deliver that basketball, but the biggest thing, he gives you some experience out there.”

Cooper participated in the team’s second annual pro day on Oct. 9 and Hilltopper Hysteria on Oct. 17, but he hasn’t been dressed out for any of the team’s games this season.

Stansbury remained hopeful, but his message shifted from receiving a positive ruling on Cooper to hopefully receiving any ruling at all before Nov. 27, and later, the new calendar year.

“I wish I had an answer to that, but I’m just going to keep saying real soon,” Stansbury said on Dec. 6. “It’s very obvious we’re not going to have it here before [the Arkansas game on Dec. 7], but we got to move on from it and whatever adjustments we got to make, we can make those adjustments. We’ve already played nine games, that’s almost a third of your season.”

Even before Cooper was ruled ineligible for the entirety of the 2019-20 season, Stansbury said the Hilltoppers were going to have to permanently change the way they play, a reality that’s even more harsh since Bassey isn’t going to suit up for WKU again this year.

“Well, I think it’s a transition for all of us,” Stansbury said about junior guard Taveion Hollingsworth playing point guard. “You’re kind of put together to play in a way, and we’ve got to go back and make some adjustments to the way we’re put together a little bit.”