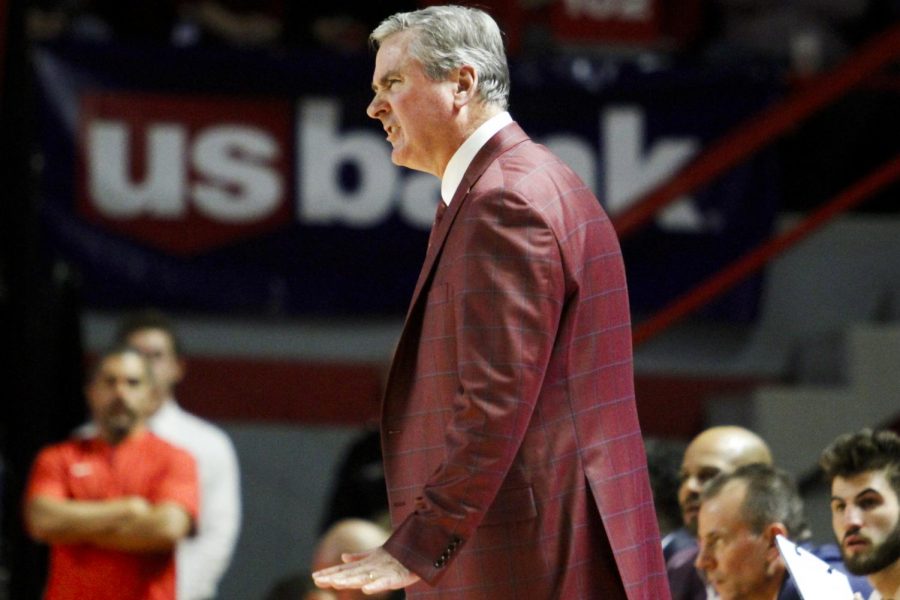 WKU head coach Rick Stansbury communicates with one of his players on the court. The Hilltoppers defeated the Razorbacks 86 - 79 in Diddle Arena on Saturday, December 7, 2019.

The WKU men’s basketball team (7-3) notched a gutty win in overtime on Saturday night, as the Hilltoppers picked up an 86-79 victory and handed Power 5 Arkansas (8-1) its first loss of the season in front of a season-high crowd that featured 6,862 fans.

The Hilltoppers returned home after playing five straight road games and picked up their eighth win over a Power 5 opponent since the start of the 2017-18 season in front of a national TV audience watching live on CBS Sports Network.

“I’m proud for our guys,” head coach Rick Stansbury said. “We’ve been through a tough stretch. We’ve had some tough games. As I said on the radio just then, everybody who was here tonight deserves an assist because we probably couldn’t have won it without them. The emotion they gave us when we needed that energy from them, helped us to get to the finish line.”

With the win, WKU is now 3-0 against the Razorbacks in a three-game football/men’s basketball series — a series that Arkansas paid the university $1.5 million to participate in.

WKU trailed 73-70 with 31 seconds remaining when graduate guard Camron Justice drew a charge on Arkansas sophomore guard Isaiah Joe that gave the Hilltoppers the ball back with a chance to tie the game and potentially force overtime.

Stansbury called for a 30-second timeout with 31 seconds still left on the game clock in order to calm his team down and draw up a game-tying shot.

“Coming out of the timeout, the instructions were, ‘No three-balls under any circumstances, run them off the three, they can only shoot inside.’” Arkansas head coach Eric Musselman said. “Savage hit a tough shot, although we didn’t even make him put the ball on the floor. From our end, alls we can do is learn. It’s a game certainly that I feel like we should have won. We didn’t, and we’ve got to learn from it in some way, shape or form.”

The play Stansbury drew up was intended for redshirt senior wing Jared Savage. After the timeout, Savage pulled up and swished a clutch 3-pointer at the outside right wing, making the score 73-73 with 26 seconds remaining in the game.

“Shout out to coach and all of my teammates for trusting in me,” Savage said. “He drew up a play for me and I just shot it. I mean, that’s what I work for all the time, being in the gym all of the time, shooting shots like that. Everybody wants to hit the game-winner or game-tier, whatever. It was nice.”

Stansbury said Savage deserved the opportunity to take the game’s most important shot for the Hilltoppers because he consistently puts in the necessary work.

“You’ll write about Jared making that shot, but what no one sees is the amount of time that Jared puts in,” Stansbury said. “Jared is that one guy from March to October, who lives in the gym. So, if there’s anyone deserving to step up and make that shot, it’s a guy like Sav because he puts in the time. He jumped up and made a huge shot to put the game into overtime.”

WKU went on to outscore the Razorbacks 13-6 in the overtime period, snapping a two-game losing streak against the first SEC team to make an appearance in Diddle Arena since the Hilltoppers fell 79-74 to Mississippi on Dec. 30, 2013.

On a night where Arkansas gave up 25 more points that it had in a game this season, WKU defeated one of the nation’s top defensive teams and one of 14 remaining unbeaten teams.

The Hilltoppers were able to get into the lane at ease, as WKU outscored the Razorbacks 46-26 in the paint and scored 15 second-chance points compared to Arkansas’ eight.

“It was cracking,” Hollingsworth said. “It was super loud. You really couldn’t hear yourself think. They were a really big part of how we came back in that game. Hearing that and them showing a lot of love, for them to come out and support us tonight, it meant a lot.”

Sophomore center Charles Bassey scored 10 points and grabbed six rebounds in 22:59 of playing time. But Bassey exited the game with 3:40 remaining after the 6-foot-11-inch big man suffered an awkward landing. Hilltopper fans chanted “Bassey” as he exited the court with the assistance of teammate Matt Horton, unable to put any weight on his injured knee.

“I mean, I really don’t for sure,” Stansbury said about Bassey’s injury status. “We just don’t know for sure. He’ll have an MRI in the morning at 8:00. We’ll figure it out from there. Anything I say right now, you know, would be all speculation. Actually, he’s got a little bit of swelling in there, so that’s never good. So, we’ll see in the morning.”

While the Razorbacks suffered their first loss of the season, Arkansas still led for a total of 16:12. Sophomore guard Desi Sills led the Razorbacks with 20 points in their lone loss of the Hilltoppers. Joe added 18 points and four rebounds against WKU.

The Razorbacks won the opening tipoff and scored on their first possession when graduate guard Jimmy Whitt Jr. scored on a fadeaway jumper.

The Hilltoppers also scored on their first possession of the game when Bassey drained a shot just inside the paint.

Arkansas kept pushing, as the Razorbacks scored on their first three possessions and took an early 6-2 lead after just 1:47 of clock time.

WKU answered by going on a 9-0 run, which was capped when Hollingsworth found Bassey in the open court for an emphatic dunk that gave WKU an 11-6 lead at the 15:42 mark.

Arkansas junior guard Jalen Harris ended WKU’s 9-0 run by swishing in a 3-pointer from the left side of the court.

Savage was recognized pregame after scoring his 1,000th career point against Illinois State on Nov. 23, but the Bowling Green native stole the ball on back-to-back possessions in the first half against the Razorbacks.

The Hilltoppers would use their aggressive defensive mindset to mount a 17-12 lead at the 11:06 mark.

Joe led the Razorbacks through their first eight games by averaging 15.8 points per game, but WKU held the 6-foot-5-inch guard scoreless until Joe drained a 3-pointer to cut the Hilltopper lead to 20-17 at the 8:51 mark.

The Hilltoppers took a 23-17 lead when Justice knocked down his first 3-pointer of the night, but the Razorbacks erased their deficit by scoring seven straight points to regain a 24-23 lead at the 6:12 mark.

Redshirt junior forward Carson Williams was quiet for most of the first half, but he scored his first points of the night at the 2:15 mark. The Owenton native then blocked two consecutive Arkansas attempts to hold the WKU lead at 29-26.

Arkansas cut the Hilltopper lead to just a point soon after, but Savage converted a late four-point play to give WKU a 33-28 lead at the halftime break.

Whitt Jr. led both sides in scoring in the first half of play with 12 points on 6-of-9 shooting from the floor.

Justice and Anderson led WKU in scoring at the break, as both Hilltoppers tallied seven first-half points.

While WKU carried a five-point lead into halftime, Arkansas managed to shoot better from the field in the first — the Razorbacks shot 44.4% compared to 40.6% by the Hilltoppers.

Hollingsworth scored on WKU’s opening possession of the second half, knocking down an elbow-jumper and extending the Hilltopper lead to 35-28 just 26 seconds into the second half.

The Razorbacks answered Hollingsworth’s jumper by completing a 4-0 run that made it a 35-32 game at the 18:56 mark.

Arkansas went on to score 12 points in the first 4:29 minutes of the second, netting seven straight field goals at one point to take a commanding 44-39 lead over the Hilltoppers.

The Hilltoppers responded by going on a 5-0 run to even the game at 44-44 when Savage drained his second 3-pointer of the night off a between-the-legs assist from Justice.

The Razorbacks answered the WKU scoring run by converting a three-point play. Sills then hit a wide-open 3-pointer from the right side of the court to give the Razorbacks a 50-44 lead at the 13:38 mark.

WKU regained its lead by stringing together a 7-0 run, which was capped when Williams fought his way into the paint for a layup at the 9:31 mark and gave the Hilltoppers a 51-50 lead.

The Razorbacks went on another 5-0 run to recapture the lead, this time at 55-51 after Sills hit a pair of free throws.

The Hilltoppers answered the Arkansas scoring run by getting two easy shots in the paint to tie the game at 55-55 at the 7:29 mark.

Sills ended WKU’s short run by converting a three-point play that put the Razorbacks up by three points with just under seven minutes left in the contest, 58-55.

Hollingsworth exploded on his own for a personal 5-0 run, putting the Hilltoppers in front once again at 60-58 with 5:08 left on the game clock.

Arkansas would tie the game at 60-60, but Bassey secured an offensive rebound and scored his 10th point of the night to give the Hilltoppers a 62-60 lead with 4:18 remaining in the game.

WKU briefly took a 63-62 lead after Anderson went 1-of-2 from the free-throw line, but the Razorbacks hit a pair of 3-pointers to open their lead back up to 68-63 with 1:39 remaining in the contest.

Arkansas increased its lead to 70-64 when Sills drove inside the lane and drove in a shot off the left side of the glass at the 1:03 mark.

Hollingsworth gave WKU hit a must-needed midrange jumper with 47 seconds remaining to make it just a four-point game at 70-66.

Hollingsworth knocked down four-straight free-throws down the stretch to cut the Razorback lead to just 73-70 with 32 seconds remaining.

Justice took a huge charge to give the Hilltoppers the ball back, and Savage drained a 3-pointer in the right corner on WKU’s next play to even the score at 73-73 and force overtime.

Anderson gained possession for WKU on the opening possession of overtime, driving into the lane and giving the Hilltoppers a 75-73 lead just five seconds into overtime..

The Razorbacks scored on their first possession in overtime as well, but Anderson answered again, as he drove in the lane and converted another shot to give WKU a 77-75 lead.

Arkansas would once again even the score, but Anderson converted a free throw and Hollingsworth scored a reverse layup in transition to take an 80-77 lead with 1:56 left in overtime.

The Razorbacks cut WKU’s lead to just 80-78 after making a free throw, but Williams converted his two free throws from the line to give WKU an 82-78 lead with 1:16 remaining in the contest.

The Hilltoppers held an 82-79 lead with just under a minute left in overtime, and Savage increased the WKU lead to 84-79 by converting a pair of free throws with 18 seconds left.

Arkansas junior guard Mason Jones made a bad pass, leading to Hollingsworth stealing the ball and slamming the ball home for the final time in WKU’s seven-point win over Arkansas.

Following the win, WKU will get 10 days off before playing its next contest and 14 days of rest before playing a game that will count toward its overall record.

The Hilltoppers will host Division II opponent Kentucky Wesleyan (2-5) for an in-season exhibition, which won’t count toward the official overall record of either participating team, on Dec. 17 before traveling to Kingston, Rhode Island, to meet Rhode Island (6-3) on Dec. 21.

Tipoff in Diddle Arena is set for 7 p.m., while tipoff in the Ryan Center is set for 1 p.m.

WKU’s exhibition against KWC will be broadcast on Hilltopper Sports Satellite Network/ESPN3, while the Hilltoppers’ road game at Rhode Island will be streamed live for ESPN+ subscribers.