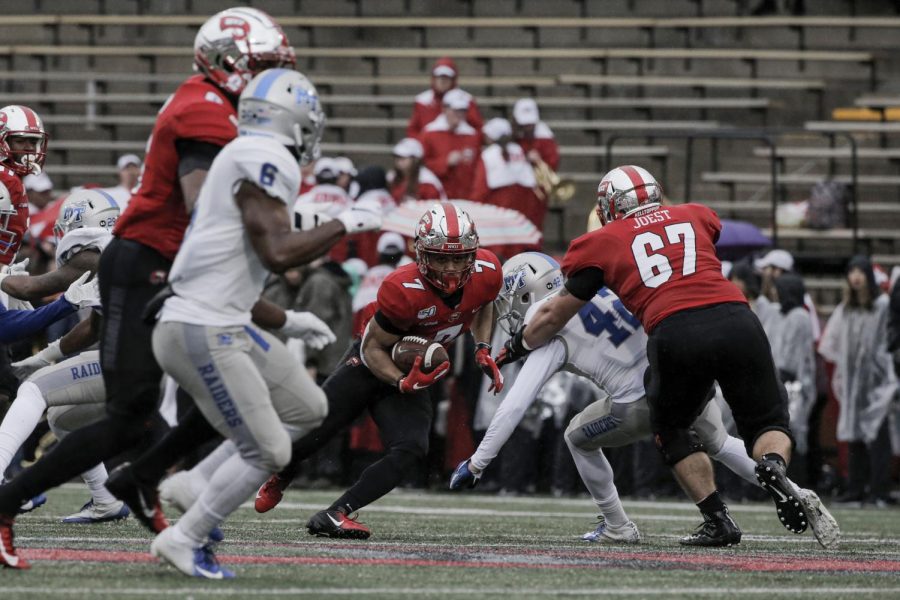 Jahcour Pearson (7) of the Western Kentucky University Hilltoppers runs down the field at L.T. Houchens Stadium during the game against the Middle Tennessee State University Raiders on Saturday, Nov. 30, 2019.

The WKU football team (8-4, 6-2 C-USA) concluded its 2019 regular season slate with a tough win against Middle Tennessee State (4-8, 3-5 C-USA) on Saturday, as the Hilltoppers stayed the course and picked up a 31-26 win in the 69th edition of the annual 100 Miles of Hate rivalry game in Houchens-Smith Stadium.

The Hilltoppers ended off on a high note by reaching a three-game winning streak on Senior Day. Fourteen WKU seniors went out with a win in their final home game as players, taking a 20-15 lead in the 35 WKU vs. MTSU rivalry games played in Bowling Green.

“Great team win,” head coach Tyson Helton said. “Always feels great to get a win against your rival. The game went about the way we thought it would be. Back-and-forth. We made plays. They made plays. They missed opportunities and we missed opportunities. That’s kind of what rivalry games are all about. This was a big game for us to finish on a good note for the season heading into the bowl and having an opportunity to carry on this winning streak.”

The Hilltoppers accumulated 474 yards of total offense, while the Blue Raiders racked up 466 of their own.

Graduate transfer quarterback Ty Storey completed 23-of-30 passes for 294 yards, passing for two touchdowns and rushing for one.

Redshirt senior receiver Lucky Jackson caught eight passes for 110 yards and one touchdown, while redshirt junior running back Gaej Walker gained 119 yards on his 14 carries and eclipsed the 1,000-yard mark in his first season playing at a new position.

Freshman kicker Cory Munson was 1 for 3 on field goal attempts.

“We seemed able to pick up momentum,” Storey said. “We hurt ourselves early on, but after we got that kind of out of our system, we started playing a little better.”

Redshirt sophomore quarterback Asher O’Hara completed 18-of-33 passes for 301 yards for the Blue Raiders, passing for three touchdowns and one interception.

The Blue Raiders gained four more first downs, ran 24 more plays and averaged 16.7 yards per completion against WKU, but two turnovers eventually allowed the Hilltoppers to trim the MTSU lead in the heated all-time series to 35-33-1.

“What we’ve been good at all year is just making adjustments on the fly,” redshirt junior linebacker Clay Davis said. “At halftime, really whatever we can do just to make an adjustment on the fly. We’ve been really good at that. Our coaches do a great job and we’re good at retaining information to be able to talk about that to change up the plays we need to make.”

O’Hara got MTSU going with a 28-yard completion to Mobley on the first play from scrimmage.

O’Hara moved the chains with a quarterback keeper, and he moved the sticks again with a solid run to get inside the WKU 25-yard line.

The Blue Raider drive stalled out from there, and redshirt junior kicker Crews Holt knocked in a 26-yard field goal. MTSU then led 3-0 with 9:27 left in the first quarter.

Walker tallied a 4-yard carry on the Hilltopper offense’s opening play, reaching the 1,000-yard rushing mark for the 2019 season.

Jackson got the WKU offense going with a first down catch, and redshirt senior receiver Quin Jernighan followed it up by moving WKU into MTSU territory with a 26-yard reception.

WKU couldn’t convert a third-and-10 play and was forced to punt. MTSU took over at its own 1-yard line after junior punter John Haggerty booted a picture-perfect 43-yard punt.

The Hilltopper defense forced three straight incompletions, and MTSU had to punt as a result.

Storey scrambled for an 11-yard gain to begin the Hilltopper drive. WKU faced a fourth-and-1 play at the MTSU 23, which Storey converted with a 4-yard rush to the MTSU 19.

Walker picked up another first down and moved the Hilltoppers to the MTSU 6, but WKU couldn’t put the ball in the end zone.

Munson came on and converted a 21-yard field goal attempt. WKU then tied the game at 3-3 with 1:13 left in the first quarter.

MTSU couldn’t muster up any offense on its next possession and had to punt again. But junior punt returner Roger Cray muffed the ensuing kick, allowing the Blue Raiders to recover the loose ball and take over once again at the WKU 37-yard line.

O’Hara kept the MTSU drive going with a 13-yard run off a read option play call.

MTSU posted the first touchdown of the game after O’Hara found redshirt senior receiver Isiah Upton in the back of the end zone for a 17-yard score. MTSU led 10-3 with 14:02 left in the half.

Jackson sparked the WKU offense with a 19-yard catch to convert a third-and-3 play at the WKU 21. But the MTSU defense stood up, sacking Storey for a loss of six yards.

WKU was forced to punt after Storey was sacked for a loss of four yards on a third-and-14 play at the WKU 36, and MTSU then took over at its own 29-yard line.

O’Hara kept up his impressive play with a 22-yard rush into WKU territory, and he soon converted another third down to the WKU 32-yard line with his legs .

Walker exploded for a 47-yard rush to begin the WKU drive, and the former defensive back continued his success with a 22-yard run to the MTSU 27-yard line on the next play.

Storey tied the game with a 27-yard touchdown run on just the third play of the WKU drive. The score was then tied 10-10 with 3:44 left in the first half.

Mobley responded with a 54-yard reception on the first play of the ensuing MTSU drive, but the WKU defense stiffened after allowing the chunk-yardage play. MTSU went for a fourth-and-1 play at the WKU 12 and was able to stay on the field after a 10-yard rush by O’Hara.

Despite having three plays at the WKU 2-yard line, MTSU was forced to kick. Holt converted a 20-yard field goal attempt with 30 seconds left before half, and MTSU led WKU 13-10.

WKU converted two first downs on its final drive of the opening frame, but the Hilltoppers couldn’t finish a Hail Mary attempt as the remaining time in the first half ran off.

Storey completed 11-of-14 passes for 102 yards while rushing for one touchdown in the opening period.

Munson was 1 for 1 on field goal attempts.

O’Hara completed 5-of-14 passes for 112 yards for the Blue Raiders, passing for one touchdown in the first half.

MTSU was led on the ground by O’Hara, as he rushed 13 times for 92 yards. Mobley led the Blue Raiders in receiving with two receptions for 82 yards.

Jackson wasted no time getting WKU on the board once again, rushing into the end zone on a 64-yard touchdown reception. The Hilltoppers then had their first lead of the game at 17-13 with 13:40 left in the third quarter.

O’Hara picked up another first down with his legs into WKU territory, but Davis sacked O’Hara and forced another MTSU punt.

Jernighan moved the sticks with a 14-yard reception. Redshirt junior receiver Jahcour Pearson got in on the action with a 17-yard catch to midfield. Freshman tight end Joshua Simon then made his second catch of the day count, going for 32-yards into MTSU territory.

The WKU drive stalled, and Munson came on to kick. The freshman missed a 32-yard attempt wide left, and the score remained 17-13 with 4:30 left in the third.

Cray provided a spark for the Hilltoppers, picking up an interception on an O’Hara pass. WKU then took over again at the MTSU 19-yard line.

WKU couldn’t cash in on another trip to the red zone, and Munson came on to attempt a 33-yarder. He missed his second try in a row, leaving the score 17-13 at the 2:29 mark.

Senior receiver Ty Lee got MTSU into Hilltopper territory with a 33-yard catch to end the third quarter. The drive stretched into the fourth quarter, as O’Hara converted another fourth down to the WKU 27-yard line with his legs .

Redshirt junior receiver Jarrin Pierce gave MTSU the lead, snagging a 24-yard touchdown catch. The Blue Raiders had a 20-17 advantage with 12:43 remaining in the game.

The Hilltoppers responded on offense with a quick three-and-out, and the Blue Raiders took over again at their own 17 after the punt.

O’Hara kept the MTSU offense on the field with a third-down converting run. MTSU faced a fourth-and-3 at its own 34 and elected to fake a punt, which WKU stopped behind the sticks.

The Hilltoppers then took over at the MTSU 36-yard line. WKU wasted no time getting down the field with a 33-yard grab from Jernighan. He then capped off the drive with a 3-yard touchdown catch, putting WKU up 24-20 with 7:14 left to play in the game.

Ali got MTSU going with a 21-yard catch to start the drive, but Mobley coughed the ball up and allowed WKU to recover possession at its own 44-yard line.

Pearson got WKU moving with a 16-yard catch, and the reception had 15 additional yards added on as a result of a facemask penalty committed by MTSU.

Storey scampered for 16 yards on third-and-8 to get WKU into the red zone, and Walker put the game away with a 5-yard touchdown run. WKU then led 31-20 with 3:28 left in the game.

MTSU gained several first downs on its final drive of the evening. Lee capped it off with an 11-yard touchdown grab, but the Blue Raiders couldn’t convert their two-point attempt.

The Hilltoppers recovered the ensuing MTSU onside kick attempt and held on to clinch a solid 11-point home victory on Senior Day.

Following the win, the Hilltoppers will finish the season in third place behind Marshall (8-4, 6-2 C-USA) and Florida Atlantic (9-3, 7-1 C-USA) in the Conference USA East Division.

WKU is already guaranteed a spot in a postseason bowl game, but the Hilltoppers won’t know their exact postseason fate for a little while longer.

According to the NCAA, College Football Playoff teams will be announced on Dec. 8. The first 2019-20 bowl games will then be played 12 days later on Dec. 20.

Click here for the entire bowl game schedule for the 2019 season, including the location, date, times and TV channels for every possible destination for the Hilltoppers.