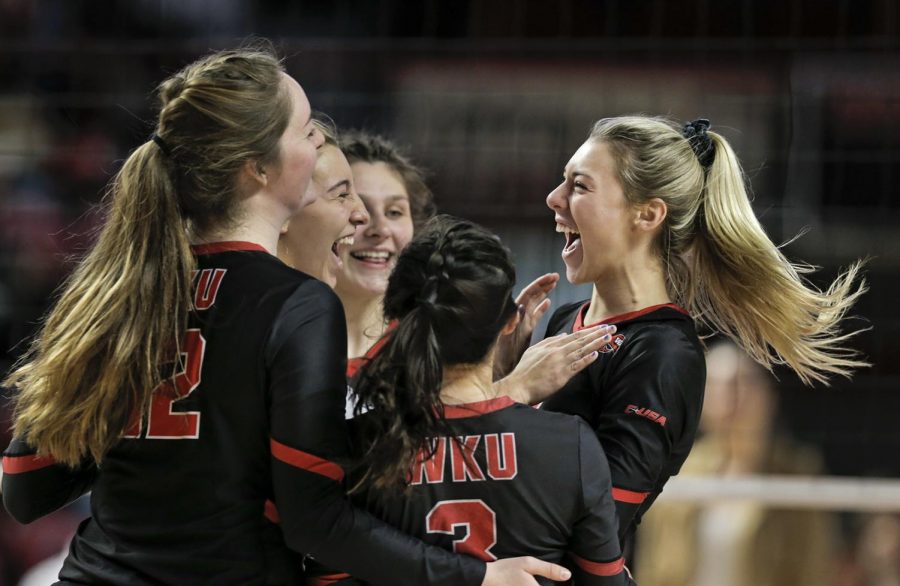 WKU sophomore Katie Isenbarger (20) celebrates after a play with her teammates during the WKU’s senior day game against the UAB Blazers at E.A. Diddle Arena on Saturday, Nov. 16, 2019. WKU swept UAB 3-0 to finish the regular season with a record of 28 wins and one loss.

The WKU volleyball team (31-1) earned the No. 15 seed in the NCAA Division I Women’s Volleyball Championship, which means Diddle Arena will host the NCAA Tournament First and Second Rounds for the first time in program history this week.

“It’s a tremendous accomplishment for this group of kids and we’re excited to have our fanbase behind us in the NCAA Tournament. We’re looking forward to great competition. It’s a great pod of four really good coaches and good teams that have had great years, so we’re just looking forward to getting started.”

The Lady Toppers are riding an active 27-game winning streak, while the Owls enter their second straight tournament appearance on a six-game winning streak after defeating Florida Gulf Coast to win the ASUN Conference Tournament.

Kennesaw State head coach Keith Schunzel said the Owls will “just try to be pretty good” at what they do, even against an opponent the caliber of WKU.

“I don’t think we try to look across the net that much to see how much different things we need to do,” Schunzel said.

“Certainly every team presents challenges and WKU is going to present a ton of challenges, no question. But I think from the beginning and as we’ve tried to build this program, we’ve just tried to be pretty blue collar, hard working and just build it the right way. I don’t think that necessarily changes through the course of a season or depending on who you’re playing.”

The Owls head to Bowling Green for their second NCAA Tournament appearance in the last three seasons and have already secured their third-straight 20-win season.

Kennesaw State is guided by junior Lauren Chastang, who led the team in kills and service aces with 434 and 65, respectively.

Junior Quin Sutphin is second in command with 341 kills and a .351 hitting percentage.

Senior Lexi Broadwater totaled 1352 assists for the Owls this season. Her average assists per set is 12.07, which ranks second in the nation.

Broadwater was named the ASUN’s Setter of the Year while junior Nadia Dieudonne earned the same recognition from C-USA.

Hudson said he has a lot of respect for Kennesaw State, which he called a “winning program” that’s competitive and expects to win every match.

“Look, Kennesaw State is a really good team,” Hudson said. “Keith Schunzel, their coach, is someone I’ve known for a while. He was at Kentucky as a part of their staff for a while and I got to know him really well there. He’s a great competitor, a great coach and I admire what he’s done at Kennesaw State. He’s built that program from the ground up, much like I did here all those years ago.”

WKU is focusing on itself at this point in the year, and junior Kayland Jackson said the Lady Toppers are fixated on the minute details that could prove to be crucial.

“It’s the small things,” Jackson said. “Little things that come down to one point in each set. We really have to focus on that because all these teams can play, so it’s really important to execute each individual detail.”

If the Lady Toppers make it out of the first round, they will run into the winner of the First Round matchup between Samford and Louisville. The Cardinals and Bulldogs are scheduled to take John Oldham Court at 5 p.m. on Thursday.

The winners of Thursday’s contests will meet for a spot in the Sweet 16 round of the NCAA Tournament at 7 p.m. on Friday.

WKU has already faced both Samford and Louisville this season, posting a 1-1 record.

The Lady Toppers defeated the Bulldogs in a clean 3-0 sweep on Sept. 21 in Diddle Arena. WKU kept Samford at a .184 hitting percentage during the match, highlighted by 11 total kills for the Lady Toppers.

Freshman Paige Briggs and sophomore Lauren Matthews both had double-digit kills against the Bulldogs, while Cerino also had six service aces to lead the team in the early-season matchup.

During the win against the Bulldogs, Matthews set WKU’s single-match hitting percentage record at .882.

Since then, Samford finished the regular season on a 12-match winning streak and earned the Southern Conference’s automatic bid.

WKU could also face is the only team that has been able to blemish the Lady Toppers’ otherwise perfect 2019 season — Louisville.

Louisville ended the year by winning three out of four, but the Cardinals lost to Pittsburgh (29-1) 3-1 in their regular-season finale on Nov. 27 and received an at-large bid to the tournament.

WKU is winless in the all-time series against the Cardinals, including a 3-1 loss for the Lady Toppers in the Louisville-hosted Fleur de Lis Tournament on Sept. 6.

The Lady Toppers were held to a .093 hitting percentage in the meeting, posting 36 kills compared to the Cardinals’ 56.

“I just think it’d be kind of fun to be their only two losses on the year,” junior Anna Stevenson said. “I don’t know, that’s a challenge for them and us. I think we’re both coming into it like excited to compete.”

Louisville head coach Dani Busboom Kelly said her team was happy to make it into the 64-team field, but the Cardinals will be even happier if they get the chance to face WKU because it would “represent the state of Kentucky and how great volleyball is here.”

“Well, I think both of us are a lot different,” Kelly said about what’s changed since the last meeting. “We’ve changed our lineup and lost arguably our best player so we’re a much different team and WKU, just watching film on them, is much improved. I don’t really know how many similarities there are to that first time, so I think it’s almost two brand new teams on the court.”

WKU could possibly face an in-state foe in the second round of the NCAA Tournament for the second time in three years.

The Lady Toppers squared off with No. 6-ranked Kentucky in Lexington on Dec. 2, 2017, in an instant classic WKU found itself on the wrong side of.

The Wildcats eliminated the Lady Toppers in a heartbreaking five-set decision on that day, keeping WKU from making its first-ever trip to the Sweet 16.

Now, WKU will get the chance to host the early rounds in Diddle Arena, which should be a large advantage for the Lady Toppers, as they posted a perfect 15-0 home record.

Hudson said he doesn’t feel a lot of pressure now that the NCAA Tournament is finally here. As long as WKU plays to its fullest potential, Hudson said he’ll be happy.

“I want to go be who Western Kentucky volleyball has been all year,” Hudson said. “At some point, that may not be good enough and when it’s not, that’s kind of why they have this tournament. When it’s your time to fall off that bracket, then it’s your time.

“My hope is that it’s not our time sooner than it needs to be. That we don’t come out and play tight and play poorly and have regrets. If we go out and let it fly and play with joy in our hearts and a competitive spirit, then we’ll be done in this tournament when it’s time to be done and I’ll live with that, whenever that is.”