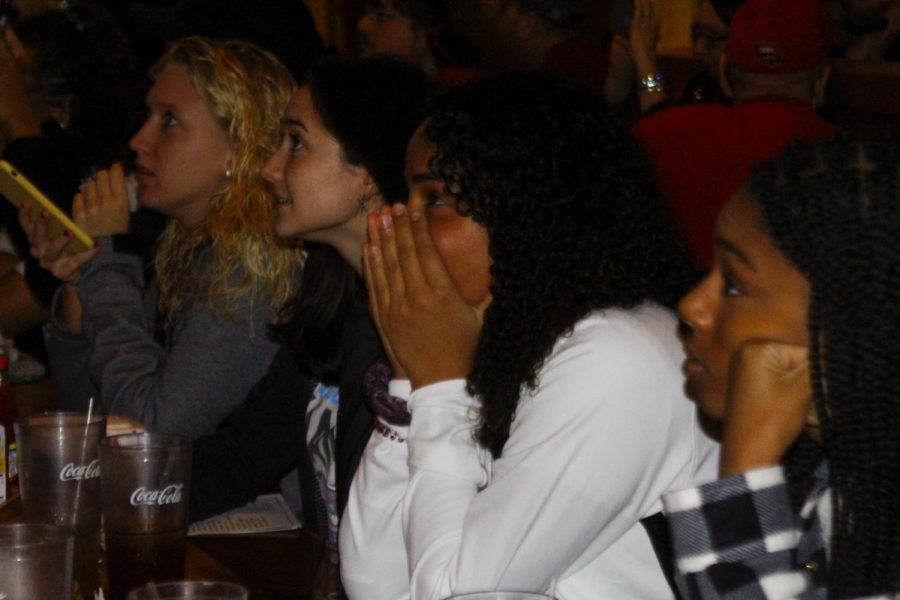 The WKU volleyball team awaits to hear who they will face in the NCAA tournament during a watch party at Roosters on December 1, 2019. WKU will play Kennesaw State on Thursday and host the first two rounds of the NCAA tournament.

After ending the 2019 regular season with a 31-1 overall record, a 14-0 mark in Conference USA play and a No. 19 ranking in the AVCA Division I Coaches Poll, the WKU volleyball team still wasn’t sure of its place in the NCAA Division I Women’s Volleyball Championship bracket.

Head coach Travis Hudson guided the Lady Toppers to a C-USA regular season title and secured his program’s fifth automatic bid to the NCAA Tournament since joining C-USA six years ago by defeating No. 21 Rice 3-2 in the finals of the C-USA Tournament on Nov. 24.

But 31 other conference champions were also automatic qualifiers, which meant WKU had little security in terms of its bracket seeding and the potential of hosting games in Diddle Arena.

The Lady Toppers finally learned their postseason fate while watching the 2019 NCAA Selection Show — which aired live on ESPNU nationally — with an entire restaurant full of red-clad fans, friends and family at Roosters on Three Springs Road on Sunday night.

About seven minutes after the Selection Show began, a loud round of applause erupted when it was revealed that WKU had received the No. 15 seed in the NCAA Tournament.

A No. 15 seed meant the selection committee had seeded WKU as one of the top 16 teams on a national basis, but it also meant the Lady Toppers would be hosting the NCAA Tournament First and Second Rounds in Diddle Arena for the first time in program history this week.

“We’ve had great crowds in there, but it’s time to fill that building up for volleyball,” Hudson said. “What we’re doing this year, it’s an incredible run that our kids are on. We’ve worked hard to achieve the respect that it takes to be able to host, and now we need Bowling Green and the WKU fanbase to come out and show the NCAA that we belong as a host site and we’re worthy of that in every way, and that includes people in the stands.”

After waiting for over a week to find out who and where the Lady Toppers would be playing, the entire room waited with bated breath as exact matchups for the entire 64-team tournament field were revealed incrementally on the TVs mounted across the eatery’s wooden walls.

“Oh my gosh, I was so anxious just all day waiting for it,” junior transfer Nadia Dieudonne said. “But you know, I think it really is just topping off our season. We’re so excited to play in front of everyone again, and it’s just remarkable.”

Roughly 15 minutes after the broadcast started, raucous cheering that would eventually explode twofold emanated from a table filled with members of the WKU volleyball team.

The Lady Toppers first rose to their feet with jubilation when it was revealed that WKU will face Kennesaw State (22-8) in Diddle Arena on Thursday at 7 p.m.

But the girls literally jumped for joy when they learned Samford (24-5) and Louisville (19-9) will join them on the Hill for another First Round matchup set for Thursday at 5 p.m.

The winners of the two First Round matchups will face off at 7 p.m. on Friday for a spot in the Sweet 16, meaning a potential rematch with in-state rival Louisville — the only team able to blemish an otherwise perfect season for WKU — is looming large if the chips fall just right.

“Well, by process of elimination I started understanding that it was possible after the Kentucky regional went by and the Purdue regional went by and Louisville hadn’t been up there yet,” Hudson said. “I knew that it very much looked like they would be sending ‘em our way.”

Although WKU has advanced to the NCAA Tournament in eight of the past 10 seasons, the Lady Toppers have posted a 3-11 all-time mark and have never reached the Sweet 16.

Defeating Kennesaw State, the owner of the Atlantic Sun Conference’s automatic bid, isn’t a given for the Lady Toppers. The Cardinals did receive an at-large bid, but knocking off the Southern Conference Tournament champion in Samford won’t be a cakewalk either.

Still, the chatter that filled the air after the 64-team tournament field was announced focused on what if — what if the Lady Toppers get a chance to avenge a loss to the Cardinals on Sept. 6?

Better yet, what if WKU can make its first-ever Sweet 16 appearance by defeating Louisville?

A shot at redemption isn’t lost on senior Sophia Cerino, who will be making her third appearance in the NCAA Tournament alongside fellow senior Emma Kowalkowski.

“I think the first time that we played Louisville we were a completely different team than what we are now,” Cerino said. “You know, we’re ready for revenge on them if that’s what everything plays out to be. So, I’m just really excited. I think we got a really good draw.”

WKU will soon become the sixth C-USA squad to host the NCAA Tournament First and Second Rounds and the first to do so since former member Louisville accomplished the feat in 2001.

Rice also earned an at-large bid to the NCAA Tournament, making C-USA a multi-bid league for the first time since Rice and former member Tulane both appeared in 2009.

The Lady Toppers enter postseason play on a school-record 27-match winning streak, boasting NCAA-best marks in both team and individual categories, and Hudson now has what might be his best shot yet at taking WKU volleyball to heights it’s never been before as a program.

“All year, nothing’s been given to this group — they’ve earned it,” Hudson said. “I think they very much have earned a top-16 seed, and now hopefully we can get people behind us and try to turn this into a special weekend.”

Fans can purchase all-session tickets for $12 per ticket at WKUTickets.com. Students will be admitted for free with a valid student ID, according to a tweet posted by @WKUSports.