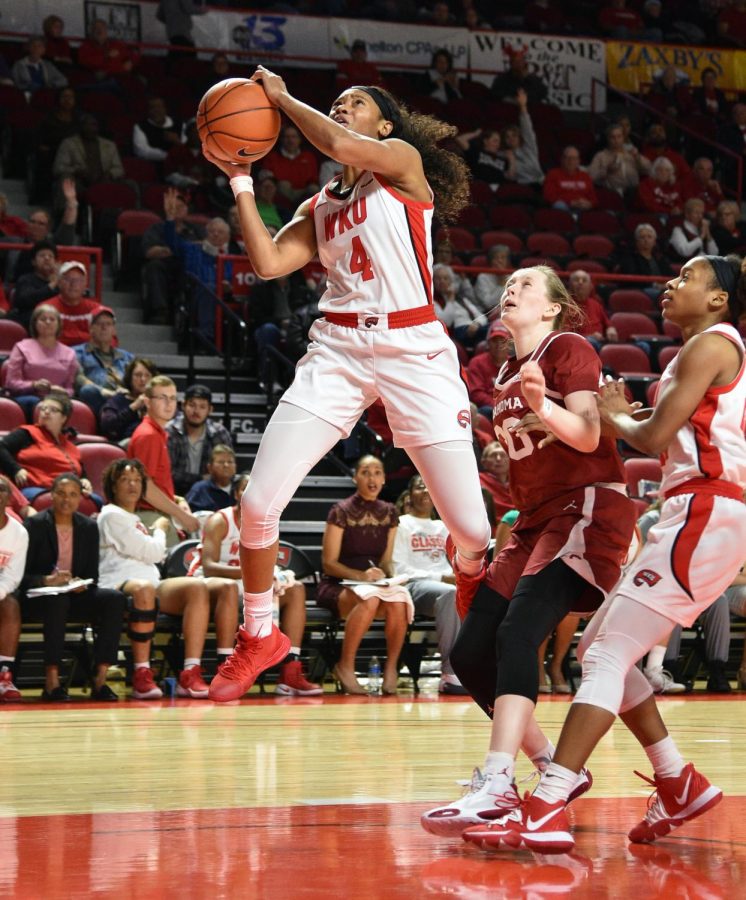 The WKU women’s basketball team (6-2) led for 27:33 of clock time against Power 5 opponent Oklahoma (4-4) on Wednesday night, as the Lady Toppers posted their most impressive performance this season en route to a 74-63 home win in Diddle Arena.

OU junior guard Ana Llanusa drained a 3-pointer with 6:14 left to play in the fourth quarter, pulling the Sooners to a 59-56 deficit.

The Lady Toppers went on to outscore the Sooners 15-7 the rest of the way and picked up a marquee victory for the WKU program.

“It’s nice to have Whitney Creech, Raneem [Elgedawy], Dee [Givens] and Sherry Porter who have been in that situation before and they are hungry to prove how good they are,” Collins said.

“I never felt like we were in danger of losing the ball game, even when they cut down the lead to single digits. I felt like we needed to keep grinding and doing what we’re doing and turn this thing back in our favor. All that mattered was what we were focused on playing our game and focused on what we had to do along the way and that will take care of the result by itself.”

WKU shot 37% from the field, 32% from beyond the arc and 67% from the free-throw line during the game. The Lady Toppers forced 31 turnovers and outrebounded the Sooners 42-41, all while holding OU star Taylor Robertson to a relatively quiet showing.

Robertson came into the game as the reigning Big 12 Conference Co-Player of the Week and led all players in made 3-pointers and threes per game, but the Lady Toppers held the sophomore guard to 14 total points on 4-of-15 shooting from beyond the arc.

“We focused on Robertson since she’s one of the best three point shooters in the nation,” redshirt senior forward Dee Givens said.

“In the first half that was key to not let her make any three pointers and that gave us a little boost and in the second half we tried to do the same thing.”

The Sooners shot 42% from the field and 78% from the charity stripe, but the Lady Toppers held a hot-shooting OU team to just 24% shooting from the three-point line.

“It’s always good to win at home,” Creech said ahead of the team’s upcoming five-game road trip. “Great teams win at home and that’s what we’re trying to be — a great team this year. This win gives us some momentum going on our road trip. We have some tough games on the road so we’re just trying to carry this play over into and improve each and every day.”

The Sooners scored five unanswered points in the first two and a half minutes of the opening quarter, as sophomore guard Meral Abdelgawad and Creech both picked up personal fouls that sent OU to the free-throw line early.

WKU kept battling, but the Sooners remained ahead 7-4.

Llanusa drew a foul on redshirt senior forward Sandra Skinner halfway through the first quarter, and the Sooners eventually mounted a six-point lead at the 4:17 mark.

The Sooners led 12-6 off of Llanusa’s effort from atop the arc, as she’d scored six points by the first media timeout of the first quarter.

The Sooners continued to work around the perimeter and limited the Lady Toppers’ chances early on, but WKU clawed to a 14-10 deficit with 2:49 left.

Elgedawy scored seven points in the first frame, but the Lady Toppers made no buckets in the last 3:47 and OU maintained a 16-12 lead after one frame.

Givens made two consecutive 3-pointers to open the second quarter of play, and the Sooners were forced to ask for an early timeout after a layup from Elgedawy gave the Lady Toppers a 20-18 edge at the 7:43 mark.

The Lady Toppers forced the Sooners to drive inside the paint, and doing so led to a 22-22 tie at the 5:19 mark after OU freshman guard Gregory drew a foul on Elgedway.

Junior forward Fatou Pouye helped protect the Lady Topper rim on defense, allowing Givens to give WKU a 29-24 lead on her third made 3-pointer at the 2:27 mark.

The Sooners still trailed 29-26 with roughly two minutes left before the half but made up ground with two late makes.

The Lady Toppers carried a 31-30 lead into the halftime break, guided by 13 first-half points from Elgedawy. Pouye recorded two key blocks to secure the defensive backcourt.

Llanusa shot 4-of-7 from the field and 1-of-1 from beyond the arc for 10 first-half points.

WKU opened the third-quarter scoring, with Abdelgawad making a layup off the glass to put the Lady Toppers up 33-30 at the 9:16 mark.

Givens followed it up with a fastbreak layup, sparking an 11-2 run that eventually put the Lady Toppers up 42-32 at the 6:44 mark.

The Lady Toppers maintained momentum against OU in the third thanks to Creech, who broke plays out and made a fastbreak jumper in the paint to give WKU a 46-32 lead with 5:46 left.

Porter made her second 3-pointer of the night off of a cross-key pass from Creech, putting WKU up 49-34 and reaching eight points at the 5:15 mark.

Givens followed that up by drawing two fouls on fastbreak plays and netting three points from the foul line.

OU answered in the final four minutes, netting a trio of 3-pointers and holding the Lady Toppers scoreless for over three minutes of clock time to significantly trim its deficit late.

The Lady Toppers held onto a 56-45 lead to open the final quarter, and Elgedawy opened the fourth quarter with a successful jumper in the paint.

The Sooners allowed the Lady Toppers to drive before Williams netted a layup and sparked an 8-0 run for OU that made the score 58-53 at the 7:33 mark.

Llanusa and Elgedawy each scored 3-pointers for their respective programs on back-to-back possessions, making the score 62-56 with 5:52 left to play in the contest.

Llanusa then made another controversial offensive play, appearing to take an additional step before scoring a layup that made the score 63-58 with 4:59 left.

Creech then intercepted a pass, drove down the court, got fouled on the fastbreak and converted a three-point play to give WKU a 67-58 lead at the 4:04 mark.

Elgedawy left the game with an apparent ankle injury with 3:30 to play, and she didn’t make a return to the contest.

Skinner drew a foul at the 2:21 mark, going 1 for 2 at the free-throw line and helping the Lady Toppers break 70 points on the night.

Creech was fouled with 1:42 left in the game, and she notched an additional two points to put WKU up 72-60 in the final moments.

Robertson drilled a 3-pointer for the Sooners with :55 left in the contest, but it wasn’t enough to keep WKU out of the win column.

OU committed a game-ending foul on Creech, allowing the Lady Toppers to seal an 11-point win with a pair of free throws when only :13 remained on the clock.

Following the win over the Sooners, the Lady Toppers will go on the road for its next five games to wrap up both non-conference play and the 2019 calendar year.

The Lady Toppers will travel to Muncie, Indiana, to take on Ball State (4-3) for the seventh consecutive year on Saturday. Ball State holds the overall lead in the all-time series, 5-3.

“Ball State is a good team,” Collins said. “[Head coach Brady Sallee] does a super job coaching that team and we have never beaten them there while I have been here.

“This is another big test and challenge for us and we’re looking forward to the opportunity to beat that team on the road.”