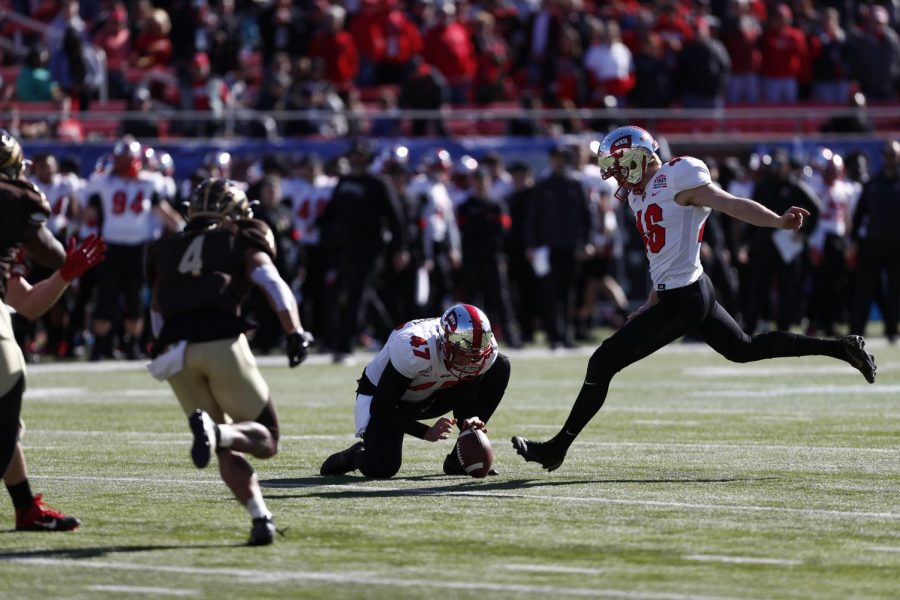 The clock read 0:00 as freshman kicker Cory Munson jogged onto the field in Gerald J. Ford Stadium in Dallas. A gentle breeze blew in his favor as he sized up the 52-yard field goal attempt that WKU football head coach Tyson Helton was calling on him to kick.

Munson, whom Helton nicknamed “Wild Thing” after the Ricky “Wild Thing” Vaughn character played by Charlie Sheen in the 1989 film “Major League,” was going to have a chance to break a 20-20 tie.

Before Munson took the field, the First Responder Bowl had been full of ups and downs for the Hilltoppers, and the wild ride started in the first quarter.

Graduate transfer quarterback Ty Storey — the veteran passer who’d transferred from the SEC and lost the race for the WKU starting QB job at the beginning of the season before eventually taking over for an injured Steven Duncan — threw an interception on his first drive of the game, forcing a pass on the run into a crowded Western Michigan secondary.

The Broncos, clad in their signature brown and yellow, capitalized on the opportunity and drove down for a field goal to give themselves a 3-0 lead. Storey and the Hilltoppers fought back, scoring a touchdown and a field goal in the second quarter.

WKU had an opportunity to take a lead into the halftime break, with Munson lining up to take a chip shot 26-yarder with 59 seconds remaining. The snap was good, the set was good, but Munson shanked it to the left and kept the score tied 10-10 at halftime.

The Hilltoppers looked lethargic out of the gates in the second half, stalling on their first three drives and allowing the Broncos to score another touchdown.

But WKU came back again, as redshirt senior wide receiver Lucky Jackson, whose 17 catches broke the program record for receptions in a game that he himself had set previously, scored on his way to being named First Responder Bowl MVP.

Munson added a made field goal later, and then the game came down to a crazy final five minutes that landed Munson in a position to try another kick — this time for a WKU win.

The Broncos had a chance to score late, going for a fourth-and-short with time running out. It appeared that WMU was going to convert, as senior quarterback Jon Wassink executed a near-perfect play action fake and the WKU defense sold out to stop a plunge up the middle.

Wassink pulled the ball back and had nothing but daylight in front of him as he attempted to bootleg to his right, but things quickly went awry for the WMU signal caller.

From there, Wassink tripped, attempted to stay on his feet and then lost control of the football, only regathering it as he fell face first into the turf on Southern Methodist’s home field.

The fatal misstep created a turnover on downs for WMU and gave the Hilltoppers one last possession in a game that was tied at 20-20 with only 27 ticks remaining.

The WKU drive stalled at the Bronco 39. With three seconds on the clock, Storey lofted a Hail Mary pass that was knocked harmlessly to the turf. Overtime.

Or not. Flag on the play. The Broncos were caught with 12 men on the field, which meant a 5-yard penalty for WMU and an extra untimed down for the Hilltoppers.

And so onto the field came Munson, in much the same situation he had missed from in the first half — other than the extra 26 yards that put him well past his WKU career-long of 48.

As Munson sized up the kick, a miss was expected. The Warner Robins, Georgia, native had missed much easier kicks, so the game seemed destined to continue into an overtime period.

But a make would send the WKU sideline into pandemonium and cap off a season full of highs — a Power 5 road win at Arkansas — and lows — a home loss to Football Championship Subdivision opponent Central Arkansas — with a 23-20 bowl victory.

The snap from graduate transfer long snapper Jared Nash was good. The hold from junior punter John Haggerty was good. The potential game-winning kick sailed towards the uprights.

Munson’s kick appeared to have the distance.