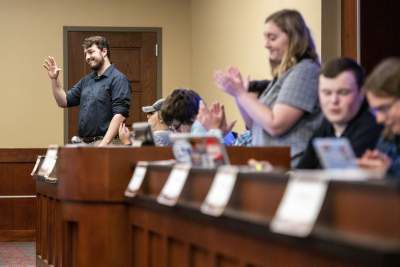 Isaac Keller gets sworn in as Chief Justice during a Student Government Association meeting in Downing Student Union on April 9, 2019.

Wells’ fervor isn’t without motivation — the Comprehensive Academic Program Evaluation Committee, or CAPE, recommended the suspension of 101 academic programs last semester, garnering not only a negative reaction from Wells, but others working for WKU.

Wells is a former SGA senator — two years removed — and a four-year student worker on campus.

“I’ve had a lot of experience at all levels of this university,” Wells said.

Wells is making a big push for student workers’ rights, especially those who he said were wronged by decisions made at WKU’s highest levels. One incident Wells noted comes from an unnamed graduate assistant working on a master’s degree in sociology. He said that she will likely be unable to finish her degree because the university would not rehire her as a GA.

Wells himself was most recently employed at the now demolished Helm Library. He saw his library working hours cut from 20 to 15 with some coworkers even going from 20 to 10.

“What I’m trying to articulate is that there’s all these points and discussions about budget cuts, contracts, and all these other abstract things that are affecting students.”

Wells also pointed to actions by Sodexo, a property management company contracted by WKU for building maintenance two years ago, as negligent to student workers. Sodexo, Wells explained in his speech, privatized away the majority of the maintenance staff, leaving many student maintenance workers out of a job.

Wells claims that a right step forward would be a labor committee that could voice the displeasures of student workers and staff alike, part-time or full-time.

“I think student workers and staff and even faculty deserve the right to have a voice.”

Another topic SGA brought up was its executive board’s veto of Resolution 4-19-F, which recommended action against members of Alpha Xi Delta’s use of a racial slur. The resolution will likely need more time before it can be presented to the senate again. Chief Justice Isaac Keller took time during this Tuesday’s meeting to give important information on how the resolution should be handled moving forward.

Keller’s main point was emphasizing that the bill would be purely symbolic — this is because SGA is not a body that has the power to suggest that WKU defund AXiD on basis of discrimination. Keller claims that this mandate comes directly from the university.

“In a lot of ways, SGA does define what discrimination is,” Keller said. “However, under the interpretation of the university, we’ve never directly correlated or connected discrimination and funding.”

SGA is still allowed to pass the resolution, but it is not as one representative of the university as a whole, meaning that should 4-19-F pass, the university has the power to reject it. The issue could be brought to the Title IX office to force WKU to take action, but SGA President Will Harris said no student has come forward to file a formal discrimination charge to the office.

Keller said the Title IX office isn’t their only option, however. Supporters of the resolution could take it to an outside group like the Human Rights Commission for Kentucky. Such a group could properly define the video and slur use as discrimination or not and this ruling could be brought before the university to incite action.