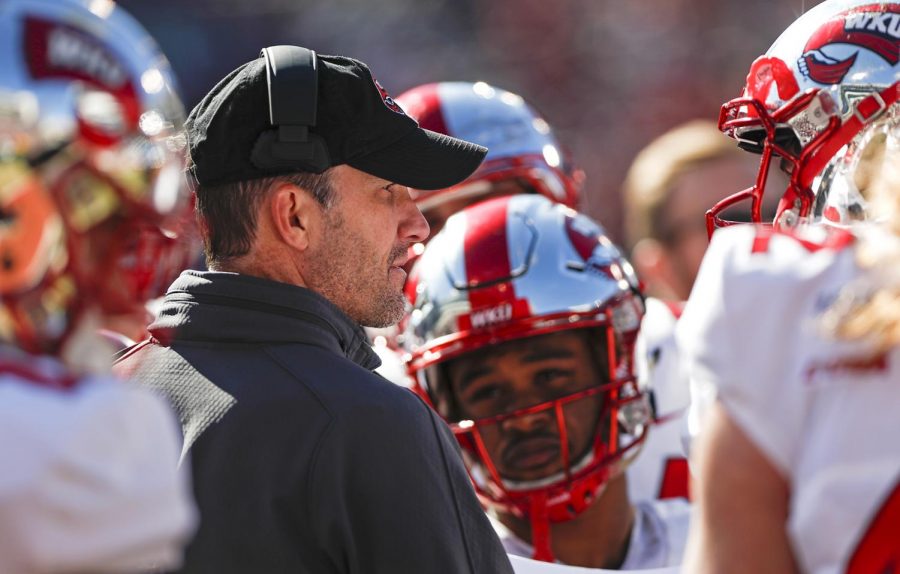 Prior to Saturday, the WKU football team had played 21 games against Power 5 opponents since 2009, which was its first year as a full-fledged member of the Football Bowl Subdivision.

WKU picked up each of its three Power 5 wins since 2009 over SEC programs Kentucky and Vanderbilt, both of which were cellar dwellers in the conference at the time.

But the Hilltoppers hadn’t been able to tally a single win against one of the premier college football programs since a 14-12 road win at Vanderbilt on Sept. 3, 2015.

Head coach Tyson Helton and an eager group of Hilltoppers (6-4, 4-2 C-USA) took the field in Donald W. Reynolds Razorback Stadium in Fayetteville, Arkansas, determined to get back into the win column against the Power 5 on Saturday, but WKU did a lot more than get a Power 5 win — the Hilltoppers made a statement.

They absolutely blasted Arkansas (2-8, 0-6 SEC), scoring a touchdown on all five of their first-half possessions during a 45-19 blowout that eventually led to Razorback head coach Chad Morris being fired after less than two seasons at the helm on Sunday morning.

WKU snapped a two-game losing streak with its most dominant overall performance in several seasons, improving to 4-21 all-time against the SEC and clinching bowl eligibility for the eighth time in nine seasons with its sixth victory of the 2019 regular season.

With the win, WKU is now 2-0 against Arkansas in its football/basketball series, a series that Arkansas paid WKU $1.5 million to participate in. The series still features one more men’s basketball game between the two schools, which is set for Dec. 7 in Diddle Arena.

WKU athletic director Todd Stewart told the Bowling Green Daily News that Arkansas was the best football program WKU has ever defeated, but Helton said postgame that he wasn’t at all surprised by his team’s dominant performance against the marquee opponent.

“Not anything against them,” Helton said. “We just felt like we had a good game plan coming in and felt like if we executed, it we would be productive. Our guys aren’t afraid to play anybody or anywhere. You don’t worry about how talented your opponent is, you worry about yourselves and you focus on doing your job and if you do that, good things will happen.”

Stadium prior to last weekend — he made only nine starts for Arkansas during his career as a Razorback, and none of those starts resulted in a home win.

Storey did guide Arkansas to a 55-20 home win over Eastern Illinois on Sept. 1, 2018, but he came off the bench in relief of starting quarterback Cole Kelley during that contest.

The Hilltoppers’ nationally televised matchup against Arkansas meant a lot to Storey because it was a chance to show out against his former team in his home state in front of his supporters.

Storey said he and the coaching staff did what they could to limit his nerves before the game.

“That was one thing I was worried about a little bit,’’ Storey said. “I know Coach Ellis was a little bit worried. He told me, ‘It’s just a game, calm down. I know you’re going to do well out there. You’ll want to go do everything, but stay within yourself and stay within the system and it’s all going to work out.’”

As the game drew closer, Helton noticed that Storey was locked in and ready to just play ball.

“I didn’t see anything different from his normal approach, but once the game got started you could tell his eyes kind of narrowed a little bit,” Helton said. “He had that look in his eye like, ‘Let’s go get it.’ That’s why we were so aggressive early. We just felt like he had the mojo and the juices flowing and our guys rallied around him. Really happy for him.”

Storey’s performance against the Razorbacks seemed like it was aimed at dispelling all of the previous misconceptions about his brief time as an SEC-caliber starting quarterback.

The Charleston, Arkansas, native played with a noticeable chip on his shoulder from the jump, as Storey outgained the Razorbacks in the first half with his statistical contributions alone.

Storey was 19-of-28 for 202 yards and a touchdown at halftime. He also added 45 yards and two touchdowns on the ground, while Arkansas had just 119 yards of offense at the break.

“I’ll tell you what, you couldn’t write it any better,” Helton said. “It’s a heck of a story. He was locked in from the get-go. He wanted this one really bad. Thought he handled everything to perfection, to be honest with you. I can’t think of really anything he did wrong today.”

Junior safety Devon Key said the team was energized by Storey’s performance and couldn’t have been happier for the quarterback, who ended the day with 290 yards of total offense

“We’re extremely happy for Ty coming into where he started off at and getting the job done,” Key said. “The look on his face after we got the win and coming off the sideline after touchdowns, it energized us to go even harder for him. Week in and week out, Ty plays his heart out every week, and it’s easy to get behind a teammate like that.”

Redshirt junior receiver Jahcour Pearson said this game had been marked down on the calendar for a while, and the entire team wanted to rally around Storey for his personal homecoming.

“We’ve been talking about this for a long time,” Pearson said. “We couldn’t wait to go to Arkansas and just show them what Ty really got. He led the offense really well. He’s a great leader out there and you could tell he really wanted it, he got a lot of passion. We really wanted to get to a bowl game and beat an SEC opponent. And Ty playing there last year added to it.”

WKU inched closer to locking up one of the six Conference USA bowl tie-ins by picking up a signature win and became one of six C-USA teams to reach at least six wins in 2019.

Even though WKU has clinched bowl eligibility, Helton said he wants the Hilltoppers to continue winning games so they can be guaranteed a postseason game even if bowl tie-ins are limited.

“I’ll be honest with you, six doesn’t do anything,” Helton said. “Six doesn’t mean you’ve arrived. For us to be a lock, I want us to go win seven. I want to finish winning out. I’d love to win eight, go to a bowl game and win nine. That’s the goal. Win every game.”

The Hilltoppers will get a little extra time to celebrate their win over Arkansas, as the team’s second and final bye week of the 2019 regular season is on tap for this weekend.

WKU won’t take the field again until Nov. 23, when the Hilltoppers will continue Conference USA play on the road against Southern Mississippi (5-3, 3-1 C-USA).

Kickoff in MM Roberts Stadium in Hattiesburg, Mississippi, is currently set for 2:30 p.m.