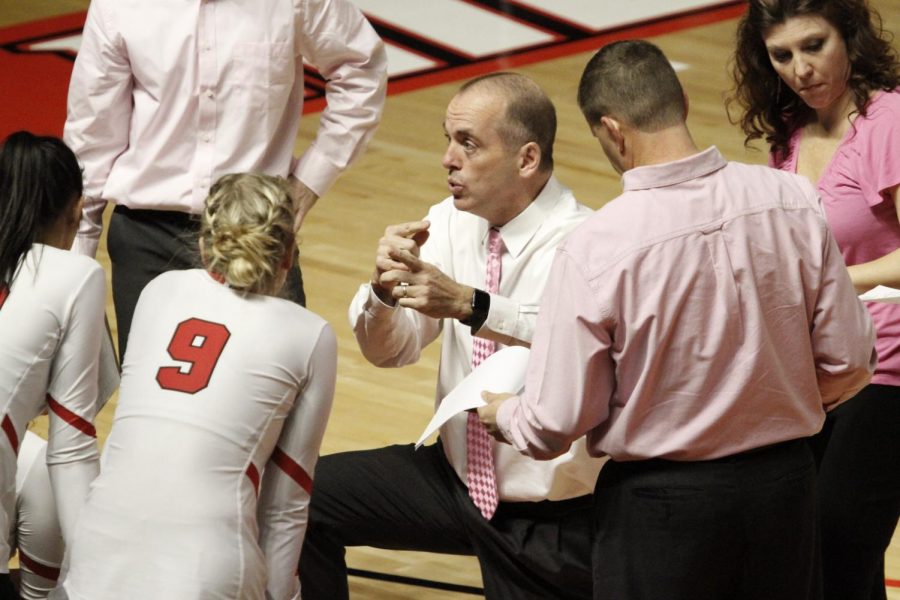 Head coach Travis Hudson explains adjustments during the first timeout in the first set during the Lady Toppers' game against Texas-El Paso in Diddle Arena on Friday, Nov. 1 in Bowling Green.

No. 23 WKU leads the nation in wins at 24, winning percentage at .960 and the Lady Topper program is now one of two in the nation with a 20-match winning streak this season.

The home win also moved the Lady Toppers to a perfect 13-0 record in Diddle Arena this season.

“Obviously, we’re on a pretty good winning streak right now, and so to me it’s about staying sharp and being our best as the season winds down,” head coach Travis Hudson said. “I’m not sure that is where we are, but we did some good things. I thought our first contact was really good tonight. I thought we served it well and I thought we passed it well. I think that kept us in control of the match.”

WKU took the early lead in the first set and went up 9-3 before UTEP called its first timeout.

The Lady Toppers used their size and speed early, with sophomore Lauren Matthews racked up four kills and two blocks, helping WKU keep the Miners to a .036 hitting percentage in the opening frame.

UTEP only totalled nine kills to the Lady Toppers’ 14 in the opening frame, allowing WKU to claim a relatively painless 25-13 victory in the opening set.

The second set was much more competitive than the first early on, as both teams traded the first 28 points of the set before WKU took a 16-14 lead.

After the Miners called a timeout at that point, the Lady Toppers took control and went on a 9-5 scoring run to clinch a 25-19 win in the second frame.

The third set started similarly to the second, but WKU built a 4-0 run to go up 10-6 and didn’t give up the lead for the rest of the game.

The Lady Toppers went on to win the third set 25-17 and clinched another in a long line of dominant wins — this was the sixth contest in a row that ended in a sweep for WKU.

Following the win, WKU will get a little bit of rest before heading back out on the road for a trip to the Lone Star State. While the Lady Toppers are in Texas, they’ll play two more key C-USA matchups.

Last year’s slip-up against the Mean Green was the first time WKU was swept at home since the 2013 season.

Prior to its meeting with WKU, North Texas will also meet Florida Atlantic (13-7, 7-2 C-USA) on the road in Boca Raton, Florida, on Sunday afternoon.

Since their first matchup in 2000, WKU leads North Texas 20-3 in the all-time series. But the Mean Green have found success recently against the Lady Toppers, winning two of the last three contests.

The Mean Green defense is in the middle of the pack, placing sixth in opponent hitting percentage, seventh in blocks and third in digs among league teams as of Nov. 1.

North Texas has two players in the top ten for hitting percentage — freshman Alysha Johnson and sophomore Sarah Haeussler — while WKU only has one — Matthews.

The Lady Toppers will look to take advantage of the fact that they are first in the conference in service aces, while the Mean Green are second to last so far.

WKU and North Texas are currently the No. 1 and No. 3 teams in the C-USA standings, respectively.

Game time at the North Texas Volleyball Center in Denton, Texas, is set for Nov. 8 at 6 p.m.