A tale of ties: Professor honors friend with style 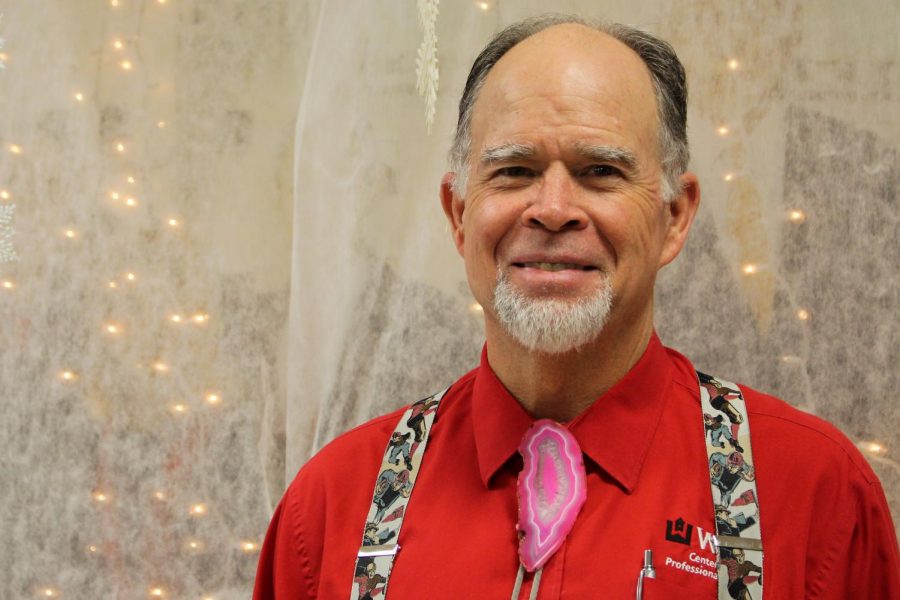 Marketing professor Chris Derry makes bolo ties during his free time. Derry is wearing his “Ralph” tie that is connected to a man he met at a conference in Denver in 2005 that encouraged and pushed him to read constantly.

Marketing professor Chris Derry replaces the philosophy books on his shelf and eases back into his chair, a calm smile on his face.

Around his neck is a shell-like fossil connected to two long strings. This, a bolo tie, is one example of the many in Derry’s collection.

But these ties provide more than a pop of color around Derry’s neck. These ties represent a philosophy, a reminder to serve.

Derry began wearing the bolo ties when his friend and mentor, Ralph Smeed, passed away.

Derry and Smeed first met at an event promoting free enterprise. Smeed, who helped develop a libertarian think tank in Idaho called the Idaho Freedom Foundation, mentored and aided Derry as he worked to create his own think tank in Bowling Green, the Bluegrass Institute for Public Policy Solutions.

Smeed’s love for bolo ties was honored at his funeral by his pallbearers, including Derry, who each wore one.

Derry selected a pink one, the same one he now wears each semester on the first day of class. The bolo tie became a reminder of not only his friendship with Smeed but of the philosophical views they shared. Derry began collecting more ties, steadily creating a large collection to honor his friend.

Smeed represented a unique philosophy about everything from government to being open-minded, Derry said, which he tries to carry with him each day through wearing the ties.

Derry, who has taught at WKU for 11 years, has found ways to incorporate the larger life lessons he learned from Smeed into his curriculum, teaching students about matters of personal integrity, success and how to live life to the fullest.

“Success is about being happy with yourself,” Derry said.

Smeed’s ideologies focused on how to find your own success and utilize your own potential, Derry said. He explained Smeed did so even when it meant saying things with which someone might disagree.

Derry recalled how Smeed used to ask him, “What have you done today to save the republic?”

Derry now wears the ties as a reminder to do just that — to serve and save the republic — no matter how small or large the task.

Derry noted that while the ties serve as a reminder to live by Smeed’s philosophy, they also motivate him to push even further. He explained Smeed had become almost hardened to the idea you can change someone’s mind.

“That’s what I do for a living,” Derry said. “I help students see that they can have a wonderful life.”

Though the bolo ties are relatively new, Nancy, Derry’s wife, said he has always had a flair for fashion.

“He had many wild ties,” Nancy said. “He sort of made the transition from the necktie into the bolo.”

She said Derry has over fifty ties. Some feature fossils or silver dollars, while others are made of fabric. Though they differ in style, all are eye-catching.

“The bolos have come from stumbling upon in traveling,” Nancy said. “Some I’ve purchased, some came from roadside stands near Indian reservations.”

Nancy said she and Derry enjoy the history behind the ties even if they don’t know the whole story.

“Some were by Native American artists, some we don’t know the origin of,” Nancy said. “A couple were from my father, who wore bolo ties.”

Nancy said she believes that just like the choice to wear a bolo tie each day, there is a purpose behind each tie itself.

“I don’t think any of these bolos have been random choices — they have a reason that they’ve appealed to him,” Nancy said. “It’s either some sort of sentiment, or there’s something about the stone.”

While each tie has its own story, Derry said he uses them as a reminder of how to live and how to progress his own story.

With the memory of Smeed around his neck, Derry is doing his best to save the republic one tie-wearing day at a time.