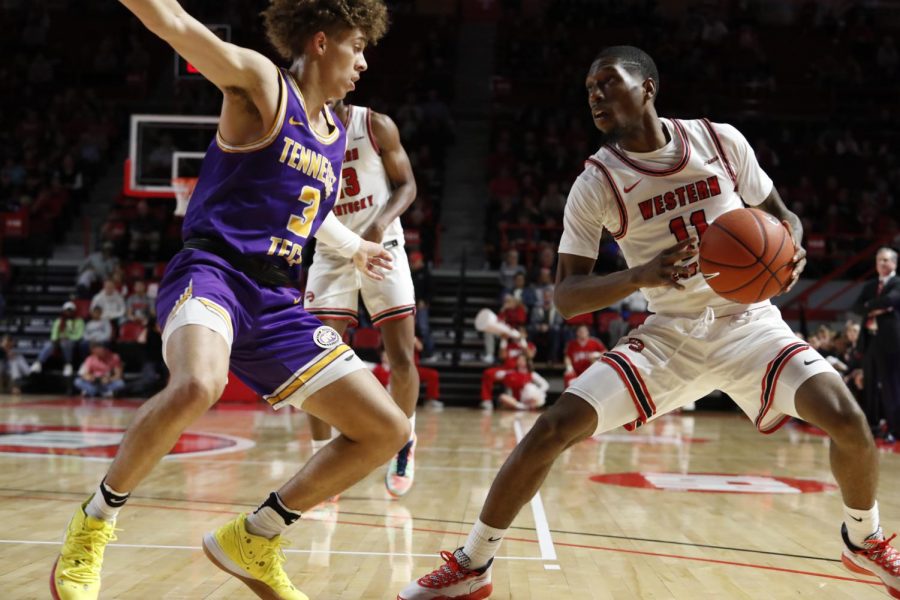 WKU junior guard Taveion Hollingsworth (11) steps back to create space during the basketball game between Tennessee Tech and WKU in Diddle Arena on Nov. 5, 2019. WKU won 76-64.

The WKU men’s basketball team (1-0) picked up its first win in a regular-season opener since the 2016-17 season on Tuesday night in Diddle Arena, scoring 25 points off turnovers to earn a decisive 76-64 home victory over Tennessee Tech (0-1).

The Hilltoppers shot an even 50% from the field against Tennessee Tech, including a 68% shooting performance from the floor in the second half. WKU led the game for 37:54 minutes, while only being tied with the Golden Eagles for 2:06 of clock time.

Despite being undersized at every position on the court, Tennessee Tech tied WKU with points in the paint at 32-32. The Golden Eagles were also barely outrebounded in their matchup against the Hilltoppers, trailing only 32-30 on the boards.

Head coach Rick Stansbury and Tennessee Tech head coach John Pelphrey competed against each other 12 times while Stansbury was the head coach at Mississippi State and Pelphrey was at South Alabama and Arkansas.

Stansbury led Pelphrey 10-2 in their personal all-time series, and Stansbury improved his margin to 11-2 with another win over Pelphrey.

“First off, give coach Pelphrey and Tennessee Tech a lot of credit,” Stansbury said. “He’s got a good basketball team. He’s got a hard basketball team to defend. He plays those four guards, they can dribble, pass it and shoot it. It’s not easy to defend. You know, I never thought we got into a flow tonight, consistently, offensively.”

Graduate guard Camron Justice made his Hilltopper regular season debut by adding 15 points, three assists and making a couple of shots from behind the arc.

Junior guard Taveion Hollingsworth scored his 1,000th career point as a Hilltopper on his second bucket of the night — a fadeaway jumper in the paint at the 17:00 mark.

With his fourth point against the Golden Eagles, Hollingsworth became the 50th player to reach 1,000 or more career points in a Hilltopper uniform.

“It means a lot right now,” Hollingsworth said. “To be up there with the top like, Courtney Lee and all of them, it feels pretty good. But, you know, I’m trying to do bigger things.”

Justice interrupted Hollingsworth to congratulate him on his career milestone.

“Speaking of that, congrats,” Justice said postgame. “I didn’t realize he was that close. It was pretty remarkable. I know they announced it and I was like, ‘Oh, alright.’”

In Tennessee Tech’s first three possessions, the Golden Eagles turned it over twice. Tennessee Tech turned the ball over three times before the first media timeout, compared to WKU’s two turnovers in the first four minutes of action.

The Hilltoppers responded by hitting their first 3-pointer, as graduate guard Camron Justice drilled a long ball in the corner off a pass from Hollingsworth to go up 23-12 at the 7:31 mark.

Sophomore center Charles Bassey didn’t score his first official bucket of the 2019-20 season until the 4:17 mark of the first half. Bassey corralled six rebounds, but he was held to just five points on 2-of-7 shooting in the first half of action.

WKU mounted a 9-4 run, building a 36-23 lead they took with them into halftime. The Hilltoppers held the Golden Eagles to just 9-of-27 shooting from the field during the first frame.

The Hilltoppers started the second half by making six of their first seven baskets, including eight points from redshirt junior forward Carson Williams in the first 4:20 of clock time.

After starting the second half making 7-of-10 shots from the field, WKU struggled to get a basket. The Hilltoppers went over six minutes without a field goal,

Senior wing Jared Savage broke the 6:40 streak of WKU not scoring a field goal when he drained a 3-pointer in the left corner to give the Hilltoppers a 64-47 lead.

The Golden Eagles cut the game to single-digits when senior guard Darius Allen knocked down a three from the right side of the floor.

Bassey quickly responded by getting to the charity line and making one of his two throws to give WKU a 71-61 lead with 2:10 left in the game.

Bassey later knocked down his first 3-pointer of the season with 1:23 left in the game.

Tennessee Tech scored just one more time, and the Hilltoppers were able to escape with a 12-point victory.

WKU was successful in claiming its first win in a regular-season opener since a 79-66 win over Alabama State on Nov. 12, 2016.

Following the win, WKU will be back in action against Austin Peay on Saturday afternoon. The Hilltoppers and Governors will square off in Diddle Arena at 3 p.m.

The game will be broadcast on Hilltopper Sports Satellite Network and ESPN3.