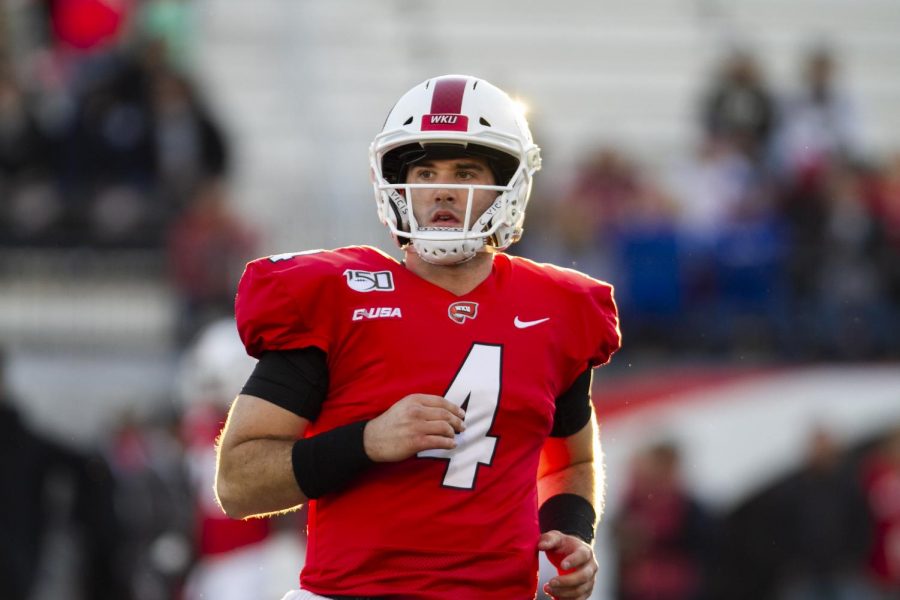 WKU Quarterback Ty Storey takes the field during warmups in preparation to compete against Army. The Hilltoppers defeated the Black Knights 17-8 at Houchens-Smith Stadium on October 12, 2019.

In the SEC, it just means more.

But for graduate transfer quarterback Ty Storey, an opportunity to lead the Hilltoppers into a crucial road matchup against his former teammates will add a little bit of extra meaning to his next start.

The WKU football team (5-4, 4-2 C-USA) will look to end a two-game losing streak this weekend against its second Power 5 opponent in 2019, as the Hilltoppers will head to Fayetteville, Arkansas, to meet SEC opponent Arkansas (2-7, 0-6 SEC).

The Hilltoppers have come up short in back-to-back Conference USA games against Marshall (6-3, 4-1 C-USA) and Florida Atlantic (6-3, 4-1 C-USA), likely slipping out of the East Division race.

Despite WKU’s recent struggles, head coach Tyson Helton said his mindset hasn’t changed at all, especially since the Hilltoppers are still just one win away from clinching bowl eligibility.

“No, not at all — I do tell our football team that you’re evaluated by your full body of work,” Helton said.

The Hilltoppers will try to take advantage of a reeling Razorback squad that has dropped six straight games, including a 54-24 loss to Mississippi State (4-5, 2-4 SEC) on Homecoming in Donald W. Reynolds Razorback Stadium last weekend.

Storey, who transferred to WKU in February, is from Charleston, Arkansas, which is just 80 miles south of Fayetteville.

After an illustrious prep career at Charleston High School, Storey spent the first four years of his collegiate career with the Razorbacks and made nine total starts at Arkansas in 2018.

After Arkansas head coach Chad Morris chose to bring in Southern Methodist graduate transfer Ben Hicks in January, Storey decided he should transfer to another university for his final year.

Storey sat on the sidelines for three games after finishing second to redshirt junior Steven Duncan in the initial race for the WKU starting quarterback job, but he guided the team to a four-game winning streak when his number was called after the first bye week.

Helton hasn’t talked to Storey about playing against Arkansas, but Helton said Storey will be motivated to play.

“I think it’ll be a special game for him,” Helton said. “He’s from Arkansas, that’s where he played, former teammates — that’s always a very special thing. But once the game starts going and you play a snap or two, that’s all out the window. You’re just focused on the game and doing your job.

“He’ll be excited for the opportunity to go compete against his former team, for sure. That’s his home state and he’s very proud to be able to go back and play in front of them.”

Now entrenched as the Hilltoppers’ long-term starter, Storey said he’s focused on the task at hand and not worrying too much about a personal homecoming that’s sure to elicit strong emotions.

“That’s how I am every week,” Storey said. “No matter who we’re playing or what’s going on, it doesn’t matter what we do or how we do it, we just got to win. That’s what the coaches preach here and that’s what we have to do. Just find a way to win the game.”

Morris has turned to freshmen quarterbacks John Stephen Jones and K.J. Jefferson after benching both Morris and Texas A&M graduate transfer Nick Starkel, but he took some time to reflect on Storey ahead of the Razorbacks’ upcoming Senior Day game.

“I’m sure Ty is excited about coming back into his home state and playing,” Morris said. “Ty and I met with his family and we did not want Ty to leave. But Ty wanted to go to a place that he wanted to go in and have an opportunity to be the starter and was going to look around and see what was best for him moving forward … We’re just excited for Ty, and he’s playing really well.”

The WKU offense has been able to put some points on the board in recent weeks, but Storey has struggled mightily with taking care of the football in the Hilltoppers’ last two games.

Offensive coordinator Bryan Ellis shouldered the blame for the turnovers and said he would put his unit in better positions.

“I got to do a better job, first off,” Ellis said. “I take the blame for that. I think I put the quarterback in a couple of bad situations. We got to do a better job as coaches. At the end of the day that comes down to us. But again, our football players are good enough to win a lot of football games here, but we got to put them in the right situations to do that.”

The WKU defense also has a tall task ahead — the unit has allowed 26 points or more and 400 yards of total offense in back-to-back games after a stretch of dominant defensive showings.

Defensive coordinator Clayton White said even though Arkansas has struggled this year, he’s ready for a fight against an SEC opponent.

“SEC Saturdays are pretty tough regardless of who you are,” White said. “Some teams have better records than others. But I think going into that conference every single Saturday, it’s a task. You got to have the experience and you got to have the right people in the right positions. Most of those games come down to the last five minutes.”

Redshirt junior defensive tackle Jeremy Darvin said that as a veteran who’s played in Power 5 road games, he will ensure every defensive player knows they belong in front of the brightest lights.

“Just embrace it,” Darvin said about what he’ll tell his teammates. “You’re here for a reason. We’re all here on football scholarships for a reason. God gave us a gift. Don’t let the conference or the stadium overwhelm you. Just keep your nerves in check and just play ball.”

Helton said even though Arkansas is a major opponent for WKU, he’s simply focused on getting the Hilltoppers back on track.

The game will be broadcast on SEC Network.