Trust your gut: How improv helped me do the unexpected 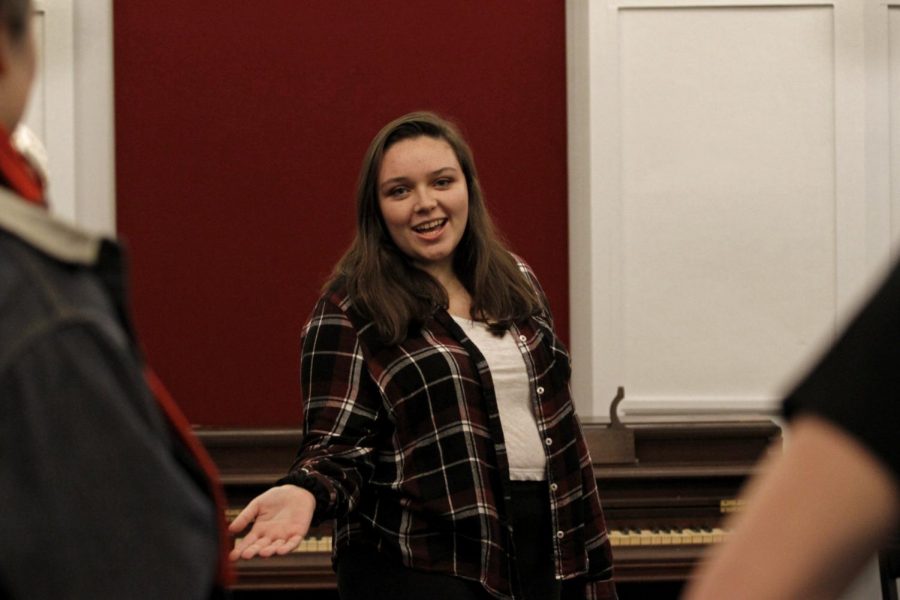 Herald writer Julie Sisler introduces herself during warmups with the Happy Gas Improv Troupe at Gordon Wilson Hall on Nov. 12, 2019.

I open my mouth prepared to deliver the line I’ve been formulating in my head for the last 45 seconds. But by the time I’ve worked up the courage to speak, my opportunity is gone, and it’s back to the mental drawing board.

I’m lying on the floor of a darkened room in Gordon Wilson Hall around 7 p.m. on a Tuesday night inches away from people acting as a DJ named Frank and a disgruntled engaged couple. Though we can’t see the audience or each other, we are acting out a scene in a nightclub using only our voices.

This wasn’t quite what I expected for the evening, but isn’t that the point of improv? To be unexpected.

Why is your gas happy?

Despite being a theatre kid in high school, my experience with group improvisational acting reached only as far as me sitting in awe of the improv team at my school. The notion of throwing myself into the unknown and hoping my brain came up with something not only intelligible but also funny was both scary and intriguing. Hesitantly, I decided to put this to the test and spend an evening with the Happy Gas Improv Troupe.

While some would consider improvisational acting a fun and artistic hobby, for the members of Happy Gas, improv is a lifestyle. Comprised of WKU students, Happy Gas is the longest-running improv troupe in Kentucky.

If, like me, you’re wondering where the name came from and why the group’s gas is happier than other gases, you’re out of luck. The story behind “happy gas,” as I learned, is a well-kept secret among members.

The group practices twice a week by meeting and running through vocal and physical warmup exercises, then playing improv games which will eventually be played at shows. Essentially, members run scenes they will never run again, as each round is improvised and therefore has a different outcome.

Who spiked your coffee? (And where can I get some?)

Climbing the stairs to the third floor of Gordon Wilson, my stomach was in knots. Admittedly, I get a little nervous before any interaction for a Herald article. But this was a whole new level. I was preparing to walk into a room full of strangers and make a fool of myself. And people do this as a hobby.

When I walked into the room, I was greeted warmly and introduced to everyone. Immediately, I was pulled into a warmup activity as if I had been part of the group all along. If anyone was hesitant to let my clueless self in on practicing, they didn’t show it.

We kicked things off with an energizer game, which involved yelling whatever came to mind loudly and quickly. After messing up a few times, I found myself getting relaxed at the thought of being so loud and speaking without thinking.

Even though I was feeding off of everyone’s energy, I was still shocked at the sheer amount of it they had. As I looked around at the group of students jumping this way and that while shouting the most random things, I couldn’t help but wonder who spiked their coffee? Furthermore, where could I get some?

They seemed completely unaffected by the dreary, cold weather outside or even the fact it was just a Tuesday evening.

Next came improv games. That’s when it hit me what feeling was causing my stomach to do somersaults: panic.

I settled into a chair facing the chalkboard away from the group and put earbuds in, turning on “chateau” by blackbear and cranking the volume high for the game “Headphones.”

My instructions were simple: Sit in the chair, keep my music’s volume up high enough so I couldn’t hear what was happening behind me, and shout out the first thing that came to mind anytime my shoulder was tapped.

Behind me, two actors would begin a scene based on a prompt given by the audience and would tap my shoulder, incorporating whatever I said into the scene. Simple enough, so why was I so nervous?

At the first shoulder tap, I tripped over my words as I called out, “Where’s my alligator?” I was so surprised with myself, unsure of where that line even came from. But before I could really dig for the answer, my shoulder was tapped again, and I called out something about a peach emoji.

Unable to hear what was happening around me meant I didn’t even have warning on when I would be called on for another random line. In an effort to stay truly improvisational, I tried to focus solely on the music blaring in my ears. So how did blackbear’s album lead to lines about Hannah Montana and peach emojis? I’m still trying to figure it out.

As we ran through more games, I became acutely aware of how strenuous improv is both mentally and emotionally. In order to keep up with everyone else, you have to be mentally sharp and on top of the situation. But given the situation’s ability to change direction with one line or movement from another person, you also have to be able to go with the flow.

On top of it all, everyone around me seemed to have no trouble with the biggest mind game of all: making a situation as funny as possible without reacting to the humor. Granted, I’ve never been good at keeping a straight face — just ask my parents — but I was majorly struggling to keep from laughing, both at their jokes and my own.

Did I say that?

Along with realizing the mental capacity improvisational acting takes, I also learned a very important lesson: It’s incredibly difficult to get out of your own head, but once you do, it’s incredible.

I spent the better part of the evening second guessing every word I thought, every movement my body made, both voluntary and involuntary. Was that witty enough? Did I add on quick enough? Was I pushing myself and the story enough?

It took multiple mini pep talks with myself before I threw care out the window and began saying whatever came to mind. I found myself speaking first and asking, “Did I say that?” after.

Once I accepted that the only way I could answer those self-doubting questions was to try, I let myself give in to the quick pace of each game and truly have fun with it.

Riding an adrenaline high, we began our last game of the night, “Asssscat,” which was a series of scenes building on each other. This led us to a scene with two people sitting in the snow, covering themselves with hot cocoa and marshmallows as they sunbathed.

Before I could entirely understand what I was doing or where I planned to go with it, I found myself squaring my shoulders, sticking my stomach out in front of me and waddling into the scene. I threw my shoulders back, put my hands on my hips and opened my mouth.

“Elves!” I bellowed. “What have I told you about sunbathing when we have so much work to do?”

Before it completely registered with myself what I was doing, I had delivered a monologue about needing the elves to work 16-hour days to produce enough hoverboards and light-up shoes for the children of the world.

I had no idea where it came from, but I took the idea and ran. As I stood there in a power stance, my blood pumping with adrenaline as I pretended to be Father Christmas himself, I realized exactly why this was a hobby.

Some people get their jollies — Santa pun intended — from sports or death-defying stunts. But for improv actors, nothing’s better than the split second between delivering a line and reading the reaction from your fellow actors and the audience. That seemingly long second where you wait to see if everyone else thinks you’re as clever as you do.

You’re taking this leap into the unknown, but you aren’t doing it alone. There’s a certain sense of rapport established with the others on stage. Everyone is in it together whether the scene is successful or not.

While I emerged from that unknown having reinvented myself as many times as a bit demanded, I realized my normal self had experienced change too. I probably still won’t say every snarky thing that comes to mind whenever the moment fits, but I did learn to take chances with what I say and to commit to it fully. After all, it can be pretty fun to do the unexpected.