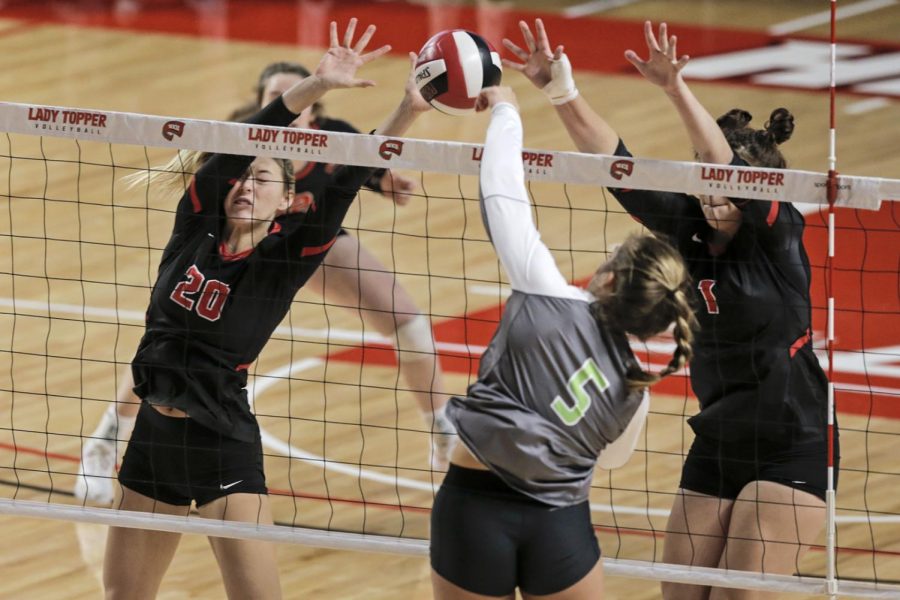 WKU sophomore Katie Isenbarger (20) and freshman Paige Briggs (1) attempt to block a spike from UAB junior Abby Carlile (5) during the WKU’s senior day game against the UAB Blazers at E.A. Diddle Arena on Saturday, Nov. 16, 2019. WKU swept UAB 3-0 to finish the regular season with a record of 28 wins and one loss.

The WKU volleyball team matched the longest winning streak in school history on Friday afternoon, as the Lady Toppers defeated Middle Tennessee State for the third time this season in the quarterfinals of the Conference USA Tournament.

(1) WKU improved to 29-1 overall by notching its NCAA-best 21st sweep over (8) MTSU, and the No. 19 Lady Toppers also claimed their 25th straight victory in Tudor Fieldhouse in Houston.

“This was a really complete effort by our team,” head coach Travis Hudson said in a release. “In the first round of the tournament, there’s always jitters and that level of excitement and with us being such a young team, you don’t know what you’re going to get. There was a calm to our locker room before the match, and at that point I didn’t know if it was flat or locked in and certainly it appears it was locked in because we played really, really well today.”

The Blue Raiders were eliminated from the C-USA Tournament with the loss and finished their 2019 campaign at 13-17 overall.

WKU posted a .486 hitting percentage in its dominant sweep, and five different Lady Toppers hit .571 or better against MTSU.

“I think we came in ready to be challenged,” junior transfer Nadia Dieudonne said in a release. “Being the first seed, we’re really expecting for everyone to play their best against us.”

The Lady Toppers started off fast and furious offensively, attacking the Blue Raiders in every phase and going up 6-1 early.

WKU continued rolling and improved to a double-digit advantage.

The Lady Toppers totaled 17 kills while holding MTSU to eight, tallied a whopping .556 hitting percentage off 27 attempts and claimed a commanding win in the first set, 25-14.

The Lady Toppers’ dominance carried over into the second set, as WKU took advantage of several MTSU errors. The Blue Raiders doubled the Lady Toppers in attack errors 6-3, while WKU had four service errors to give MTSU almost a third of its points.

But WKU’s dominant defense continued, as the Lady Toppers held MTSU to a .097 percentage during a 25-14 win in the second set.

The teams started the third set by trading blows until WKU went on an 11-1 run to go up 18-10 in the decisive set.

The Lady Toppers had full control from that point — WKU went on to win the final set 25-15 and claimed another clean 3-0 sweep.

Following the win, (1) WKU will meet the winner of (4) Marshall and (5) Florida Atlantic in the semifinals on Saturday at noon.

Marshall and FAU got started at 2 p.m. on Friday, taking the floor shortly after the Lady Toppers and Blue Raiders finished up.

The Lady Toppers swept Marshall on Oct. 6, while WKU defeated the Owls 3-1 in Boca Raton, Florida, on Oct. 11.

All C-USA Tournament games will be streamed live for ESPN+ subscribers throughout the weekend.