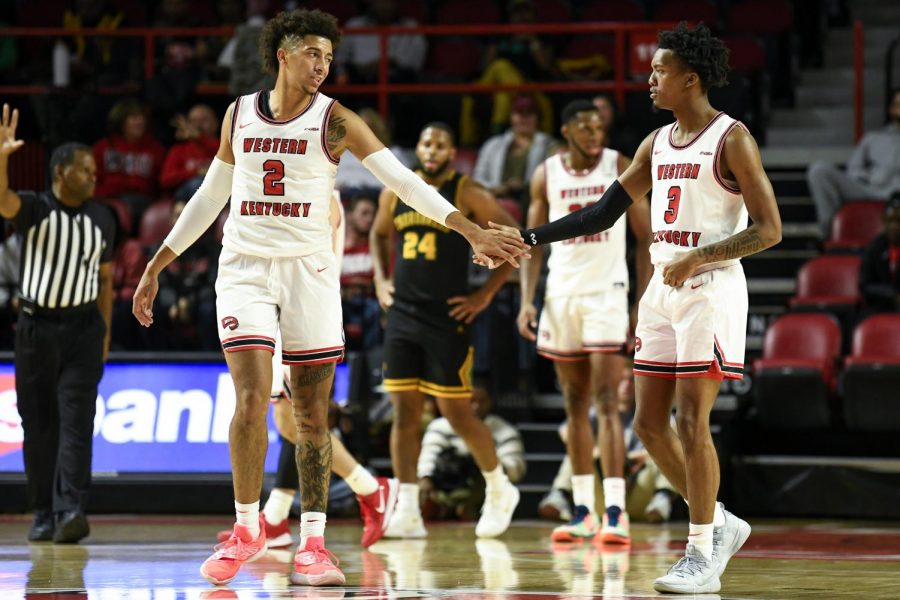 The WKU men’s basketball team never trailed in its dominant 85-45 exhibition win over Division II Kentucky State on Saturday night in Diddle Arena, leading by as many as 47 points in the second half to claim the team’s only tuneup before the regular season begins.

The Hilltoppers outrebounded the Thorobreds 58-41 and also scored 26 bench points compared to just 18 for Kentucky State. Although WKU shot 43% from the field and 60% from the free-throw line, the Hilltoppers shot a lowly 3-of-20 from behind the arc.

Kentucky State trailed in every major statistical category, but the Thorobreds did score 30 points in the second half after only scoring 15 in the first half. The Thorobreds also mounted their best scoring run of the night at 8-0 during the contest’s closing minutes.

“The thing we didn’t do great tonight — I’ve had zero concerns about, we’ve done it all fall — is shoot the basketball,” head coach Rick Stansbury said postgame. “We didn’t shoot it very well tonight. We went 3 for 20 from the 3-point line, didn’t shoot our free throws well. You know, maybe that’s some tightness, nerves, first game, I don’t know. But those are two things I’ve had zero concerns about. I haven’t seen any of that in any of our little scrimmages we’ve had or our practices. We have enough guys that can make shots.”

Savage wasn’t surprised with Williams scoring 13 of his 18 total points in the second half alone.

“I mean, I go against him every day in practice and he bullies me all the time,” Savage said postgame. “It was nice to see him kicking someone else’s butt.”

The Hilltoppers scored on their first possession of the contest when Savage scored his first two points of the 2019-20 season.

Bassey started the game with back-to-back slam dunks, the first of which led to a successful and-one. WKU kept forcing the ball into the paint early, as Williams finished off another 3-point play during the first 4:15 of the first half.

The Hilltoppers went on to outscore the Thorobreds 22-6 in the paint during the first half and 56-24 throughout the entire contest.

Junior guard Josh Anderson and freshman guard Jordan Rawls were the first two WKU players off the bench. Anderson made his presence known right away, collecting a steal and a huge dunk on the other end to give WKU a 15-9 lead with 11:51 left in the first half.

Anderson finished with 14 points in nearly 20 minutes of action, while Rawls finished with 8 points and three assists in almost 17 minutes.

Several extended scoring runs allowed WKU to maintain a double-digit lead for most of the first half, as the Hilltoppers held the Thorobreds to a lowly 6-of-32 shooting from the field.

WKU ended the first half on a 9-0 run over the last 4:18 of clock time, granting the Hilltoppers a 37-15 advantage when the halftime buzzer sounded. Kentucky State closed out of the half by missing 13 of its last 14 shots from the field and failing to score for the final 5:36.

Bassey led the Hilltoppers with 10 points in the first half on 4-of-7 shooting from the field and also added eight rebounds, which was tied for the team-high in the frame.

The Thorobreds simply didn’t have an answer for Williams early in the second half.

Williams caught fire and scored 13 straight points for the Hilltoppers, helping WKU build its lead to 55-21 before a media timeout at the 13:33 mark of the second period.

WKU continued to put the ball in the basket during the second half, as the Hilltoppers scored 28 points in the first 9:40 alone.

During that time period, six different WKU players scored and gave the Hilltoppers a sizable 63-23 lead with 10:55 left to play.

The Thorobreds doubled their first half scoring output just over 12 minutes into the second half, finally reaching 30 points on a layup from senior forward Damarri Moore at the 8:40 mark.

The Hilltoppers kept increasing their lead as the second half continued, going on a 10-0 run from the 8:25 mark until the 6:01 mark to go up 75-30 over Kentucky State.

WKU emptied its bench at the end of the game, giving freshman guard Jackson Harlan and redshirt junior guard Patrick Murphy their first minutes of the 2019-20 season.

Kentucky State scored a few more times against the WKU bench, but the Hilltoppers had already mounted a larger lead than the Thorobreds could ever overcome.

WKU escaped its first game action of the year with a 40-point victory in front of its home crowd.

Following their exhibition win, the Hilltoppers will be back in action against Tennessee Tech on Tuesday night. WKU will open up the regular season when the Golden Eagles swoop into Diddle Arena for a 7 p.m. tipoff. The game will be broadcast on ESPN3.