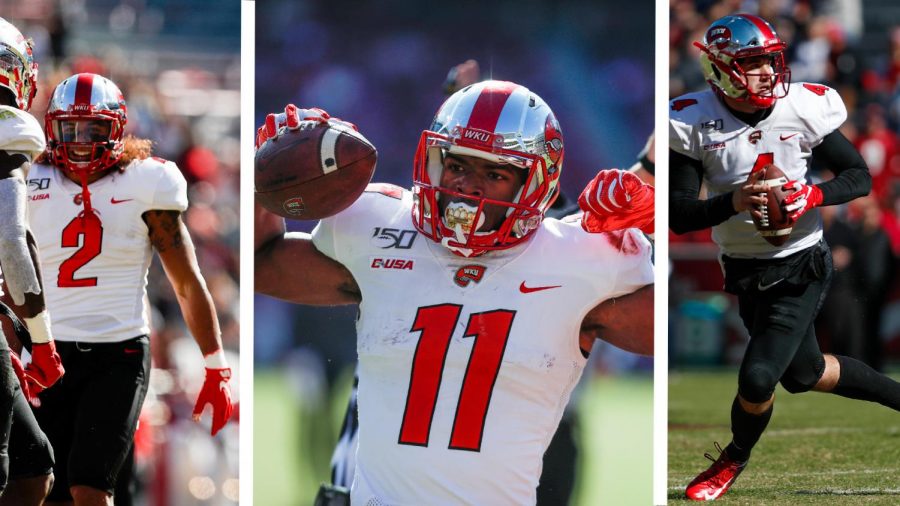 The WKU football team (6-4, 4-2) picked up several honors on Monday morning, as two players were recognized by Conference USA and one upperclassman gained national recognition.

This week is the first time since Oct. 8, 2018, a C-USA team has earned both Offensive and Defensive Player of the Week honors, and WKU accomplished the feat after its 45-19 win at Arkansas.

Storey is also the Hilltoppers’ first C-USA Offensive Player of the Week since Nov. 20, 2017, when quarterback Mike White took home the award.

Storey completed 22-of-32 passes for 213 yards and a touchdown and rushed 17 times for 77 yards and two more scores in his return home to the Natural State.

The Charleston, Arkansas, native completed 68.8% of his passes against his former team, marking the sixth consecutive game in which he has completed at least 68% of his attempts.

Key had a team-high seven tackles and a 25-yard interception return for a touchdown against the Razorbacks.

The Lexington native tallied his fifth-career interception, and the Hilltopper defense held the Arkansas offense to only 87 yards passing — the fewest by the Razorbacks since they had 61 on Sept. 9, 2014, at Texas Tech.

With two more honors from the conference, WKU has now had a player honored in each of the three C-USA weekly award categories.

Junior linebacker Kyle Bailey was named C-USA Defensive Player of the Week on Sept. 30, while freshman kicker Cory Munson has won the C-USA Special Teams Player of the Week award twice after wins over Florida International and Alabama-Birmingham.

The Biletnikoff Award annually recognizes the season’s outstanding Football Bowl Subdivision receiver in college football, and Jackson is in the midst of a career season for WKU.

Jackson is the first Hilltopper to be recognized on the Biletnikoff Award Watch List since both Taywan Taylor and Nicholas Norris were on the list in 2016.

Jackson ranks second in C-USA with 62 receptions and leads the league with 839 yards. On the national scope, he is tied for 13th in the FBS in receptions and is 17th in yards.

After starting the 2019 campaign with only 25 receptions for 263 yards and zero touchdowns through the first six games, Jackson exploded three consecutive 100-yard games.

Jackson’s 16 catches at Marshall established a new WKU all-time record, eclipsing Jay Davis’ mark of 15 which had stood since 1969.

The next week, Jackson’s 194 yards against the Owls matched Taylor’s performance in the 2016 C-USA Football Championship Game for the fourth-best single-season receiving mark in program history.