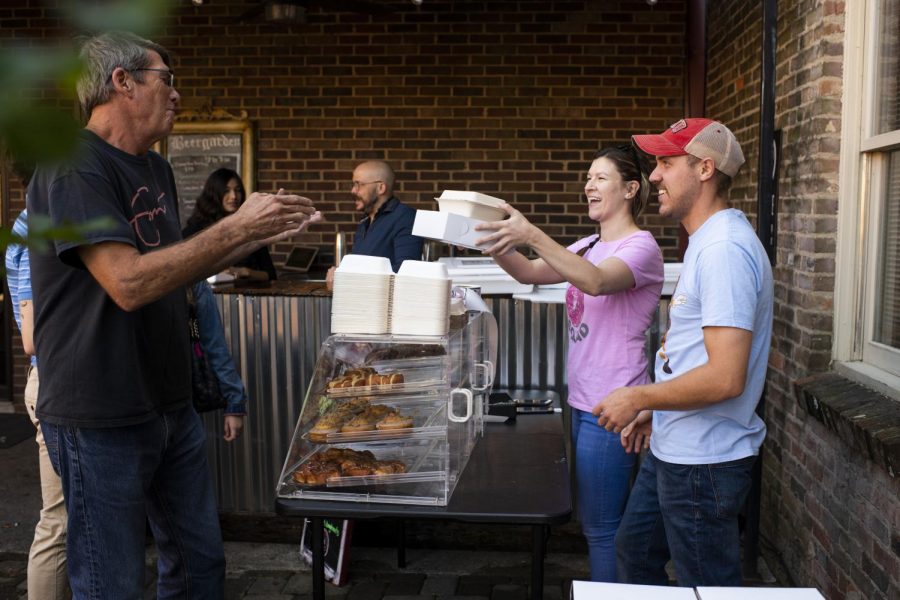 Nina (middle) and Kyle Pollock, the couple behind Park Street Doughnuts, hand their customers doughnuts at their pop-up shop on Sunday, Oct. 27, 2019, at Spencer’s Coffee. The up-and-coming doughnut shop consistently has lines out the door at each event.

On a crisp November morning, the Pollocks readied their doughnuts for the Christmas open house at Deemer’s Flowers. Upon walking into the shop, floral aromas filled the air. As one kept walking, a sweeter, more sugary scent overtook it.

It was 9:15 a.m., and the Pollocks had only been open at Deemer’s for 15 minutes. Over three quarters of their doughnuts had already been purchased. Clearly they were doing something right.

The idea came to Kyle and Nina Pollock in April when they visited Nina’s sister in Los Angeles. Kyle had been looking for more than his day-to-day job as a FedEx delivery driver, and seeing all the quirky, gourmet doughnut shops in LA was just what he needed to get ideas flowing.

So, Kyle and Nina began making doughnuts out of their kitchen.

“I never thought it would be doughnuts, but I’m down with it,” Kyle said with a grin as his eyes scrunched underneath a Yazoo brewing hat.

After three years of marriage, the couple makes a good pair. Kyle prepares the doughnuts, and Nina helps with the design. That’s been the dynamic since Park Street Doughnuts had its first pop-up shop in June.

“Everything that could’ve gone wrong did go wrong,” Kyle said with a chuckle as he sat with Nina near a window in Spencer’s Coffee.

Despite some common struggles expected when starting a new business, the pop-ups have been largely successful. The couple sells out of doughnuts at nearly every one, especially as the Park Street Doughnuts name grows in popularity.

Though they’ve made and sold the doughnuts themselves, the Pollocks haven’t been completely on their own. Brad Golliher, editor of Bowling Green Living Magazine, and his wife Brie, co-owner of Boyce General Store and also known as the “Pie Queen,” have helped them along the way.

Brie contacted them for a pop-up and also offered advice on running a local business, Kyle said. Brad designed the Park Street Doughnuts logo, one which might look familiar with the iconic red, white and blue water tower of Reservoir Hill Park appearing on it.

There is no doubt a college town can be a good place for a doughnut shop. Great American Donut Shop is a Bowling Green staple, especially since it stays open 24/7.

Park Street Doughnuts’ offerings, however, are more gourmet. If you’ve been to Five Daughters Bakery in Nashville, imagine doughnuts which look and taste similar to those: just as beautiful as they are delicious.

At a pop-up which took place on Oct. 27 at Spencer’s Coffee, doughnut flavors such as death by chocolate, lemon meringue, pigs in a doughnut, pumpkin spice and apple fritter were part of the Pollocks’ specialty selection.

Amber Stephens, one of Nina’s co-workers and big fan of the pop-ups, said she was most excited for the lemon doughnut. She’s been to nearly every pop-up and is disappointed whenever she has to miss one.

“Everything about them is what I love about desserts,” Stephens said as she walked her dogs on a Thursday afternoon. “Every time I go to another doughnut shop, I have regrets.”

Each pop-up takes place at local businesses within or near Bowling Green. One of the first appearances was at Candle Makers on the Square, and there have been others at locations such as Boyce General Store. Stephens said the Pollocks’ commitment to supporting other local businesses is one of Park Street Doughnuts’ best qualities.

“I like how they support other businesses along with theirs,” Stephens said.

The couple had to take a break from doughnut making in October as they prepared to welcome their first child, Nora. Having a newborn daughter hasn’t slowed down or stunted business, though. Nora was with Kyle and Nina at the Deemer’s pop-up on Saturday.

The next pop-up will this Saturday, Nov. 16, at Zest Juice for Life, and Park Street Doughnuts can be followed online at its Facebook and Instagram pages.

Features reporter Katelyn Latture can be reached at [email protected]