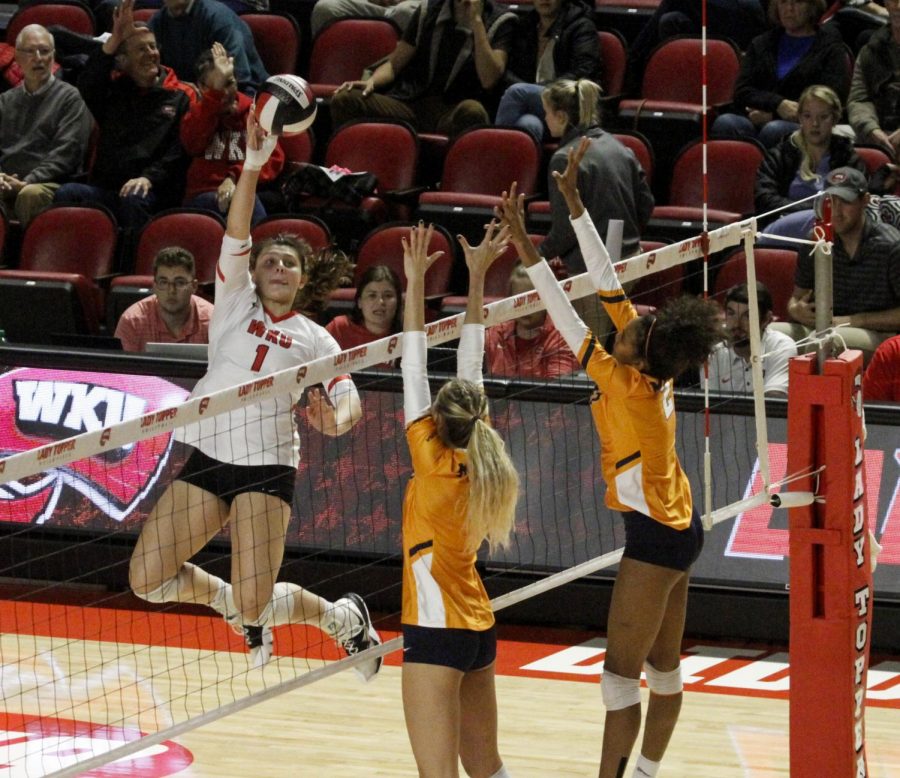 Freshman Paige Briggs (1) plays defense as she jumps and attack the ball against two Miners during the Lady Toppers’ game vs. UTEP in Diddle Arena on Nov. 1st, 2019. WKU won 3-0.

The WKU volleyball team (28-1, 14-0 C-USA) racked up postseason honors from Conference USA on Wednesday, as the league office announced that four Lady Toppers were all-conference selections.

Freshman Paige Briggs, junior transfer Nadia Dieudonne and sophomore Lauren Matthews each found themselves on the all-conference first team, while senior Sophia Cerino made the all-conference second team for the second straight season.

Briggs also earned a spot on the league’s all-freshman team.

This is the first time the Lady Topper program has earned three all-conference first team selections since 2017.

In six seasons in C-USA, WKU has had a trio of first team award winners five times. Across those six seasons, WKU has seen 24 total all-conference recognitions, with 15 being on the first team.

Briggs made an immediate impact for the Lady Toppers and C-USA took notice by handing the Ortonville, Michigan, native two awards.

Briggs racked up 14 double-doubles during the regular season while being tabbed the C-USA Freshman of the Week seven times.

In her first season on the Hill, Dieudonne earned the first all-conference nomination of her collegiate career.

She earned six C-USA Setter of the Week honors while facilitating the Lady Toppers to a collective .299 hitting percentage.

Dieudonne registered 1,085 assists through the regular season along with 230 digs, 81 kills and 36 block assists – all career-highs.

The Louisville native averaged 10.96 assists per set overall and climbed to 11.28 per set in C-USA matches. Dieudonne posted seven double-double performances during the regular season.

The Indianapolis native leads C-USA and ranks second in the NCAA with a .454 hitting percentage this season.

In league matches, Matthews worked at a .483 mark. She posted 399 kills throughout the regular season.

Matthews has also been a force to be reckoned with at the net defensively, tallying 119 blocks for a 1.20 blocks per set this season. She owns 32 solo blocks and 87 block assists.

She was named the C-USA Offensive Player of the Week on four occasions during the regular season after earning a spot on the league’s preseason all-conference team back in August.

The NCAA volleyball aces and aces per set leader, Cerino has been lethal from the service line by striking for 73 aces so far.

She tallied 191 kills through the regular season to go along with 66 blocks. Over the course of the season, Cerino was recognized as a preseason all-conference selection, the league’s Defensive Player of the Week once and a WKU Invite all-tournament team honoree.

No. 19 WKU spent the final six weeks of the regular season ranked in the AVCA Division I Coaches Poll and enters the postseason on a 24-match winning streak that dates back to Sept. 6.

First-seeded WKU will meet eighth-seeded Middle Tennessee State (13-16, 6-8 C-USA) in the quarterfinals on Friday at noon.

The C-USA Tournament will be streamed live for ESPN+ subscribers.