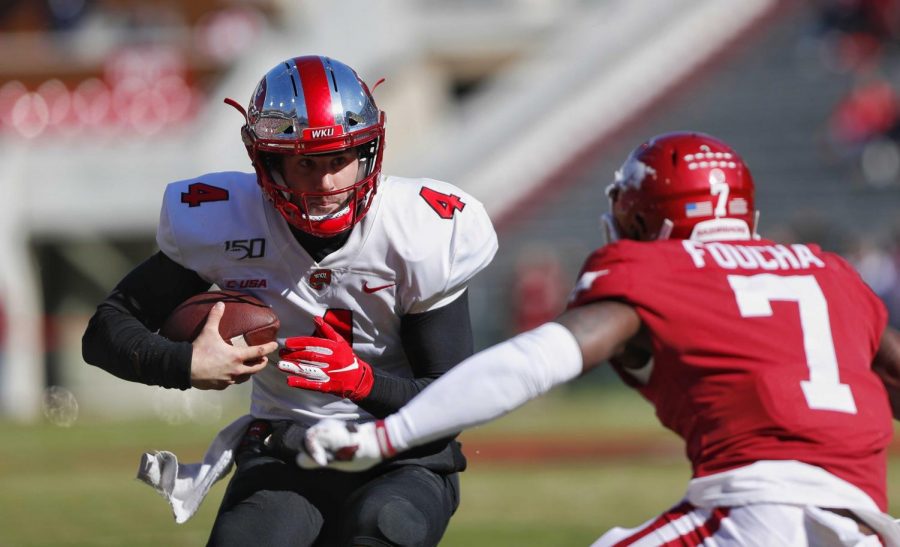 The Hilltoppers snapped their two-game losing streak in style, clinching bowl eligibility against its second Power 5 opponent this season. WKU never trailed, and the Hilltoppers were only tied with the Razorbacks for about six minutes when the score was knotted 7-7 in the opening quarter of action.

“Big win for us and our program today,” head coach Tyson Helton said postgame. “Really felt like our kids were locked in. Came out firing early. Was great to get up early and I really felt like we had control of the game the whole time. Very proud of our football team. Kind of a signature win for us. Still got a couple more to go and they’ll be big games for us.”

Graduate transfer quarterback Ty Storey completed 22-of-32 passes for 213 yards, passing for one touchdown and rushing for two touchdowns in his return to Arkansas.

Freshman kicker Cory Munson was 1 for 1 on field goal attempts.

Storey said enjoyed being back in a familiar area and he was pleased with how the contest transpired.

“It was good to be back in this area,” Storey said postgame. “It was cool to experience it with a bunch of guys who haven’t been to northwest Arkansas. The game went about as good as we could’ve asked so we’re pretty pumped right now.”

The Razorbacks accumulated 340 yards of total offense, while WKU gained 478. Arkansas couldn’t crack 100 yards through the air, gaining only 87 yards compared to 213 for WKU.

“We saw that all the quarterbacks have been interchanged in the past weeks,” Key said postgame. “We knew they were trying to get the young guys in.”

The WKU defense got off to a hot start. After forcing a third-and-5 play on Arkansas’ opening possession, junior safety Antwon Kincade picked off an errant pass from Jones.

The Hilltoppers took over for the first time at the Arkansas 42-yard line, and quickly faced a fourth-and-4 play at the Arkansas 36. Pearson extended the WKU drive by snagging a 5-yard reception. Storey soon made it 2 for 2 on fourth downs, converting another with his legs.

Junior receiver Jacquez Sloan then put the Hilltoppers on the board first, tallying a 19-yard touchdown run on an end-around play. WKU led 7-0 with 9:30 left in the first quarter.

Arkansas picked up its initial first down with an 11-yard catch from receiver Treylon Burks.

Boyd busted loose on the WKU defense just a couple of plays later, scampering into the end zone for a 76-yard touchdown. The score was tied 7-7 with 8:02 left in the first quarter.

Jackson got the Hilltoppers’ next possession going with an 11-yard reception, grabbing his first catch of the game to the WKU 36 and picking up first down yardage. Pearson extended the drive, nabbing a 13-yard catch to pick up a first down on a third-and-4 play at the WKU 42.

Freshman tight end Joshua Simon followed suit with a 22-yard reception, which moved WKU close to the red zone yet again. Pearson converted the fourth third down of the drive with an 8-yard reception to the Arkansas 9-yard line on a third-and-4 play.

Storey took it upon himself to move WKU back in front of the Razorbacks, running in a 9-yard touchdown with his legs. The Hilltoppers then led 14-7 with 1:59 left in the quarter.

The Hilltopper defense forced a quick three-and-out by Arkansas at the end of the first quarter, allowing the WKU offense to take over at its own 41-yard line to begin the second quarter.

Pearson continued to slice and dice the Arkansas secondary, collecting another first down on a third-and-6 play at the WKU 45-yard line. Storey converted the third fourth down of the day with a 4-yard rush, and Jackson followed up with a 7-yard catch to convert yet another fourth down.

After Walker picked up the fourth first down of the WKU possession, Storey capped off a 16-play scoring drive with his second rushing touchdown of the game. He snuck it into the end zone for a 1-yard score, putting WKU up 21-7 with 7:42 left to play in the half.

The WKU defense held strong yet again, as junior defensive back Roger Cray and junior linebacker Kyle Bailey both recorded crucial pass breakups to get Arkansas off the field.

The Hilltoppers took over for their fourth possession at their own 27-yard line after the punt.

On the second play of the ensuing WKU drive, Storey and Pearson hooked up for a nice 69-yard passing touchdown. The Hilltoppers then led 28-7 with 6:02 left in the half.

Arkansas opted for a quarterback change, switching Jefferson. Jefferson ran for a first down to open the drive, but Arkansas was forced to punt yet again soon after.

WKU started the ensuing possession at its own 32-yard line after the Arkansas punt, and Jackson got the Hilltoppers rolling with a 14-yard reception on a back shoulder fade.

Storey kept the drive alive with a 4-yard rush on a third-and-3 play at the Arkansas 44.

Jackson hauled in a spectacular 26-yard catch later in the drive, moving WKU to the Arkansas 1-yard line. Walker punched it in for a 1-yard score, putting WKU up 35-7 at halftime.

Storey completed 19-of-28 passes for 202 yards, passing for one touchdown and rushing for two more scores.

Pearson caught eight passes for 115 yards. Walker ran for 51 yards on his 11 carries.

Jones completed 3-of-7 passes for 27 yards and an interception. Boyd rushed three times for 79 yards and a touchdown, while Burks and Mike Woods each caught one pass for 11 yards.

The Razorbacks accumulated 119 yards of total offense, while WKU racked up 317 and scored a touchdown on each of its five possessions in the first half.

The Arkansas defense forced the first WKU punt of the game to open the third quarter, and Hilltopper punter John Haggerty came on to punt after a three-and-out.

The Razorbacks, led by Jones once again, threw three incompletions and quickly punted it back to the Hilltoppers on their opening possession of the second half.

Walker got loose for a 39-yard run to get WKU in Arkansas territory, and Storey followed that up with a 22-yard rush to the Arkansas 1-yard line.

The WKU drive stalled on the goal line, and Munson knocked in a 19-yard field goal attempt to put the Hilltoppers up 38-7 with 9:38 left to play in the third quarter.

The following Arkansas drive lasted 12 plays, covered 38 yards and took 6:51 off the game clock, but it ultimately resulted in a turnover on downs after a poorly timed holding penalty during the possession negated a 26-yard passing touchdown from Jefferson to Burks.

Walker and Storey each picked up first downs on the ground during WKU’s next drive, which stretched into the fourth quarter before ending with a 36-yard punt from Haggerty.

Boyd then ripped off his second long touchdown of the game, this time running in an 86-yard score. Redshirt freshman offensive lineman Gunner Britton blocked the Arkansas extra point attempt, and WKU led the Razorbacks 38-13 with 12:21 left to play in the game.

After a WKU punt, Key picked off Jefferson at the Arkansas 25 and took it all the way into the end zone for a pick-six. WKU led 45-13 with 8:20 left in the game.

Jefferson bounced back with a 2-yard rushing touchdown on the following possession. After a failed two-point conversion attempt. WKU led 45-19 with 4:44 left in the game.

Redshirt sophomore Davis Shanley checked in at quarterback for the Hilltoppers, and backup running back KeShawn McClendon later picked up a first down for WKU.

The Hilltoppers continued chewing clock, maintaining possession until backup running back Josh Samuel fumbled at the Arkansas 23-yard line with 1:38 left to play in the game.

Arkansas ran a few more plays, but WKU held on for a 26-point win on the road.

Following the win, WKU will be off next weekend.

The Hilltoppers will not play next Saturday during their second and final scheduled bye week of the 2019 regular season.

WKU won’t take the field again until Nov. 23, when the Hilltoppers will continue Conference USA play on the road against Southern Mississippi (5-3, 3-1 C-USA).

Kickoff in MM Roberts Stadium in Hattiesburg, Mississippi, is currently set for 2:30 p.m.