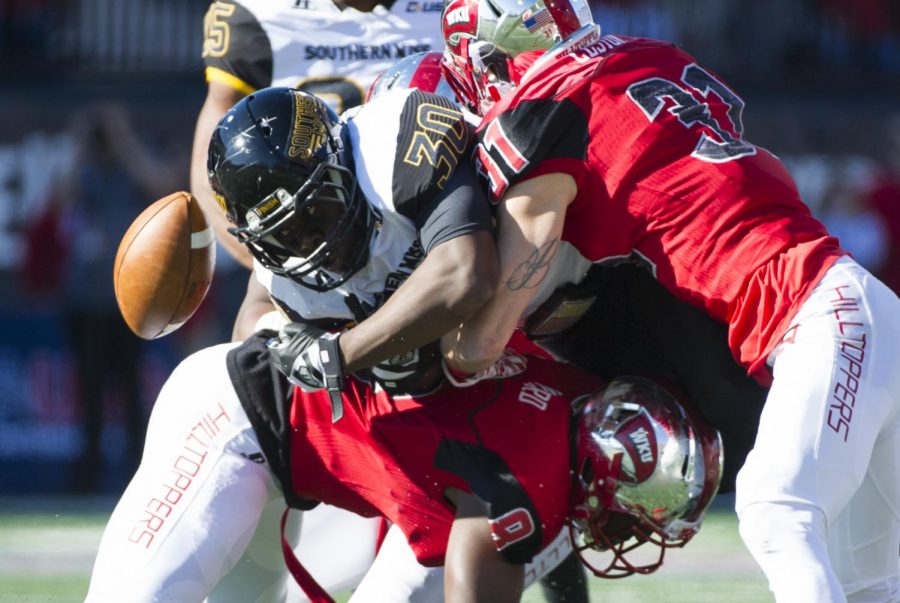 With both of its scheduled bye weeks in the rearview mirror, the WKU football team (6-4, 4-2 C-USA) will return to game action this weekend against Conference USA opponent Southern Mississippi (7-3, 5-1 C-USA) on the road in Hattiesburg, Mississippi.

Both teams have already locked up bowl eligibility in 2019, but the Hilltoppers are seeking a win to separate themselves from the pack in C-USA, which boasts six bowl-eligible teams.

The Golden Eagles enter their game with the Hilltoppers on the heels of a 36-17 road win at Texas-San Antonio (4-6, 3-3 C-USA) while WKU was idle last weekend.

Head coach Tyson Helton said WKU will have to play well to get a win in M.M. Roberts Stadium, where Southern Miss has posted a 9-1 record over the past two seasons.

“I think they’re probably the most complete team, if you look at them statistically,” Helton said. “Leading the league in passing, total offense, they’re up there near the top in defense, they have good kicking specialists. They just make it really hard on you.

The WKU offense broke out against Arkansas two weeks ago, as the Hilltoppers put up a season-high 478 yards, scored 45 points for the first time since a 45-14 Homecoming win over Charlotte on Oct. 14, 2017, and snapped a two-game losing streak in style.

Offensive coordinator Bryan Ellis said limiting turnovers will be essential against Southern Miss, just as it was during a zero-turnover outing at Arkansas.

“When we’ve been good, we’ve kept the ball and haven’t turned the ball over,” Ellis said. “In order to win these last two, that’s what we’re going to have to do. We’re facing a really potent offense. We’re going to have our hands full. If we can make a couple plays, not turn the football over and play well offensively, I think we’ll give ourselves a chance.”

Graduate transfer quarterback Ty Storey played his most complete game as the WKU starter against his former team, amassing 290 total yards and three touchdowns in his last outing.

Storey said the coaching staff did a good job of keeping the offense focused during the bye week, which has helped the Hilltoppers get prepared for their C-USA matchup.

“I think our coaches have done a great job of really working us over the bye week,” Storey said. “I know some teams will take it off. They definitely made it a little easier on us to get our bodies back in check, but we still put in some work and I think they’ve done a good job of keeping us in the flow of the game.”

The Hilltopper defense also put together an all-around performance at Arkansas, only giving up 19 points and forcing a pair of turnovers.

But WKU will have its hands full against a talented Golden Eagle offense, which currently averages 30.6 points per game.

Defensive coordinator Clayton White said the bye week was necessary for the defense to lock in on fundamentals heading into the final two games of the regular season.

“Most importantly, we always want to focus on our details, our fundamentals and just making sure that we’re where we need to be at and our eyes are in the right spot on every single play,” White said. “It’s really the small things. There really wasn’t anything major that we focused on. Obviously some Southern Miss stuff, but the main thing was just fundamentals and focusing on us.”

Redshirt sophomore linebacker Jaden Hunter — who transferred from Georgia to WKU in June and was granted immediate eligibility in August — said he’s pleased with where the WKU defense is at, but he thinks there’s still a lot more work to be done.

“I think we’re in a happy place right now, but we’re not content with where we’re at,” Hunter said. “I think we’re going to finish these last three games off strong and use this to push us into next season.”

The Hilltoppers have posted a 7-3 record in their last 10 games following a bye week, including a 20-13 win over previously unbeaten C-USA opponent Alabama-Birmingham on Sept. 28.

Helton’s message to the players this week has been simple — “Just stay consistent” — and the first-year man said he expects the Hilltoppers will be more than ready to get back onto the field.

“Well, I think you just stay with the blueprint that you have but you keep it fun for the guys, you keep them locked in,” Helton said. “This time of year you want to have momentum — we have the momentum, so the guys have a lot to play for.

“It makes practices better, and you’ve got a great opponent that we’re about to play, so they get excited. There’s not a lot you have to do when you’re doing those things.”