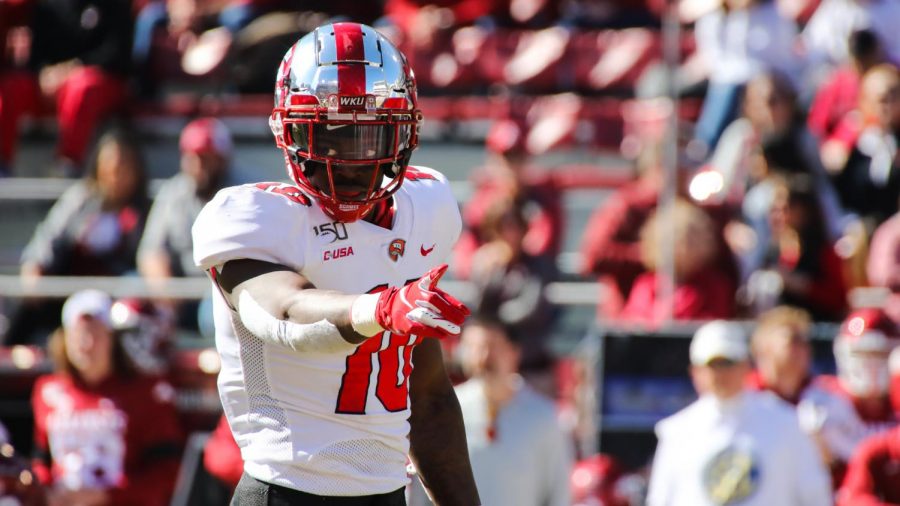 Malone led a WKU defense that held Southern Miss to its fewest points in M.M. Roberts Stadium in six years, as the Hilltoppers picked up a 28-10 road win in Hattiesburg, Mississippi.

Malone had two tackles for loss — including one and a half sacks — and seven total tackles on the day.

But his biggest play of the game was forcing a fumble on a strip sack, then recovering the fumble and taking it into the end zone for a 5-yard scoop-and-score touchdown in the fourth quarter. It was WKU’s first fumble return for a touchdown since 2014.

Earlier in the game, Malone set the Hilltoppers’ single-season record in the program’s Football Bowl Subdivision Era for tackles for loss.

With 20 tackles for loss on the season, Malone is only the 11th defender in WKU’s 101-season history to have at least that many.

With 10.5 sacks, Malone is only the fourth defender in program history to reach double-digit quarterback takedowns in a single season.

His 7.5 total tackles per game are tied for 88th in the country, which leads all defensive linemen.

The next-best trench defender is Jessie Lemonier of Liberty, who is tied for 212th in the nation with 6.2 per game.

Even prior to Malone’s honor, WKU had already garnered recognition in each of the three C-USA weekly award categories.

Graduate transfer quarterback Ty Storey was named the C-USA Offensive Player of the Week on Nov. 11 after a dominant performance in his return to Arkansas.

Freshman kicker Cory Munson has won the C-USA Special Teams Player of the Week award twice after wins over Florida International and Alabama-Birmingham earlier this season.

Kickoff in Houchens-Smith Stadium is currently set for 1 p.m.