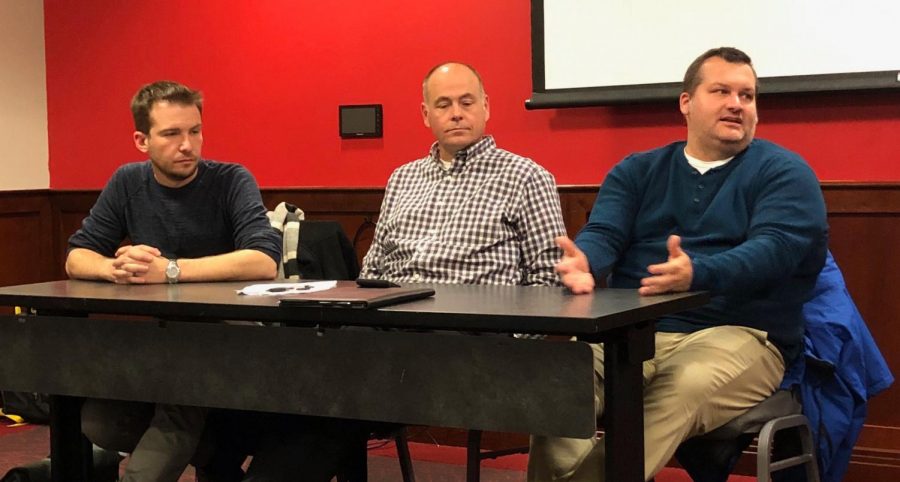 The impact of Tuesday’s gubernatorial election and the political future of Kentucky were the focuses of a post-election analysis led by three faculty members in WKU’s Department of Political Science.

“I think Tuesday was a pretty good night for both the Republican and Democratic parties and organizations in the state of Kentucky,” said Scott Lasley, head of the political science department. “The last few years have been a bit of a struggle for the party, and what this election does is provide a bit of a lifeline.”

Lasley said the main goal of in-state politics is to control the governorship.

Possibly the biggest focus of the election was on the state pension crisis, especially with teachers. Lasley said he knew of several faculty members at WKU who would leave work and begin campaigning.

“I don’t think we saw it as much here in Bowling Green as we did in other parts of the state,” Lasley said. “But there were folks that basically volunteered everyday or five months.”

Lasley was joined by associate political science associate professor Jeff Budziak. Budziak said an incumbent governor in a republican state winning only 52% of the vote is a “bad sign.”

“On the one hand we saw Bevin’s weaknesses, on the other hand we saw a pretty deep Democratic primary,” Budziak said. “We got three diverse types of candidates, we got a lot of fundraising on the Democratic side, so I think in some ways while Beshear and Bevin winning doesn’t tell us as much.”

Tuesday’s election also saw Republicans win two races for the Kentucky House of Representatives. Samara Heavrin won the race in the 18th district while Kim Banta won in the 63rd district. Lasley said these wins are needed for the Republican party.

“It’s probably a good thing for the Republican party in terms of enhancing their diversity,” Lasley said. “It’s not the most diverse party, at the national or state levels.”

Budziak cited what he views as Bevin’s “unique lack of personal popularity” as a factor in his election loss, but does not think this election has any bearing on the 2020 presidential race.

“Maybe at the margins there’s some evidence that President Trump isn’t quite as popular in some areas, but with him not being on the ballot and with Governor Bevin’s unique unpopularity, I think this is more a reflection of Kentucky than it is about Trump,” Budziak said.

Political science professor Joel Turner also took part in the discussion. Turner said he feels the race for secretary of state was the most interesting down-ballot race of the night. In this race, Republican Michael Adams defeated Democrat Heather French Henry.

“Going into the night, outside of the governor’s race, if the Democrats were going to win something that’d be it, and that clearly did not happen,” Turner said.