‘Isn’t that what you want?’ Trump makes last-minute push for Bevin 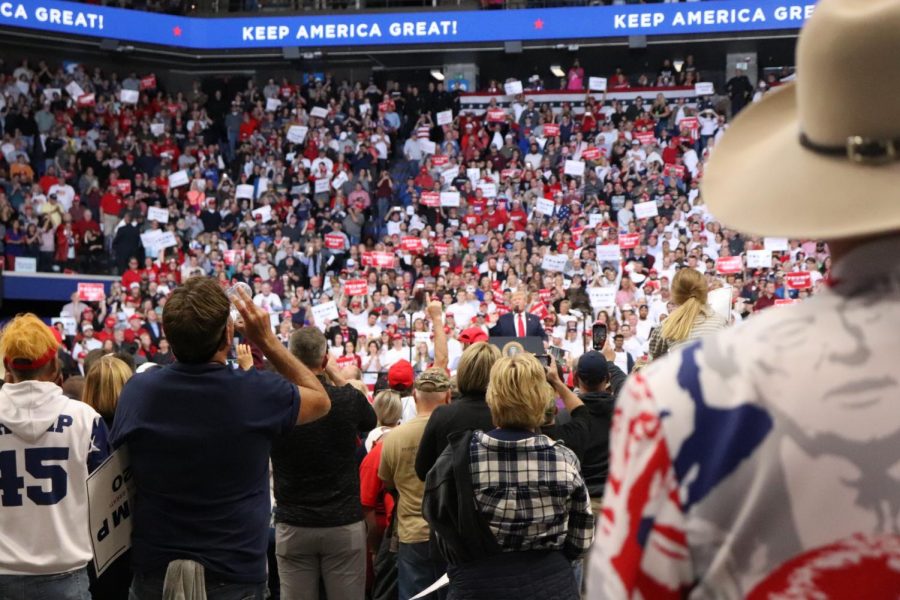 Less than 12 hours before the polls open in Kentucky, President Donald Trump held a rally in Lexington, hoping to turn the tide in favor of Republicans in what is expected to be a tight gubernatorial race.

While there are several elections on Tuesday’s ballot, including attorney general, secretary of state and agriculture commissioner, local and national attention has been fixed on the fight between incumbent Gov. Matt Bevin and Attorney General Andy Beshear. Some recent polls show a tight margin, or even a tie, between the two.

Trump strongly encouraged voters to support Bevin, while citing his hard work and progress in the state.

Some Trump supporters and political science professors believe Monday night’s rally will be enough to secure a re-election for Bevin, despite a low approval rating as he closes out a term that has seen him battle with teachers over pension issues and state education funding.

Currently, Bevin is ranked the second least popular governor in the country, according to Morning Consult.

Several times throughout his speech, Trump encouraged the audience to vote for a straight Republican ticket, and specifically praised Bevin while attacking Beshear for being a “major leftie.”

“Beshear doesn’t represent you, he represents the Washington swamp,” Trump said. “…He wants sanctuary cities. Beshear is too liberal, too extreme and too dangerous for the state of Kentucky. Tomorrow everyone needs to vote Republican.”

Read here to learn more about where the candidates stand on three major issues.

Scott Lasley, political science department head, said it’s “pretty cut and dry” to see how Trump is beneficial to Bevin. The president, who won Kentucky by 62.5% in 2016, has remained popular in the state, and he said particularly popular in areas the governor may be lacking.

The morning of the rally, Lasley said Bevin has essentially treated Trump as a running mate, which is evident through campaign ads and statements. The rally, he said, was designed to showcase the relationship between the two and to bring energy and media coverage to the campaign.

However, Lasley said using a president in a local election is not unique or uncommon. He said the magnitude of Bevin and Trump’s relationship is greater, but typically if there is a president who is popular or unpopular in the area a candidate is running in, they will either use a good or bad relationship to further their campaign.

One example he provided was how Alison Lundergan Grimes avoided saying if she voted for former President Barack Obama or not, because he was not popular in the areas she hoped to win.

For Trump, the benefits may be a little less clear. Lasley said the rally gets the president out of Washington, D.C., and into an environment where he won’t face tough questions. Additionally he said Trump enjoys the rallies, and can change the news cycle to focus on the rally.

If Bevin wins, Lasley said Trump can also emphasize the success during his own campaign.

After the rally, Cierra Dood and Bryce Dood from Morehead said Monday was their first rally. They called the entire environment energetic. Bryce said he always thought of Trump supporters as a “silent majority,” and was encouraged to see many supporters there.

Additionally, they said they were surprised by the relatively small number of protestors.

While there was only a small number of protestors outside Rupp Arena who held anti-Trump signs and chanted as supporters filed out for the evening, more had taken over downtown Lexington.

Both Cierra and Bryce said the rally may have slightly impacted their decision in the gubernatorial election.

“If he supports them, they gotta be good,” Bryce said about the Republican candidates up for election on Tuesday.

He added while he was already planning to vote for Bevin, seeing Trump’s relationship strengthened his support, and he said he’s more willing to let people know now.

Paula Pedigo said she went to the rally because it was an opportunity to see the sitting president while also campaigning for Bevin. She said he is probably facing a tough race, but believes the rally will be a big push and will hopefully increase voter turnout.

Pedigo said she supports Bevin because of his role in bringing more jobs to the state, cutting regulations and overall making Kentucky an important player in the country. Recently at a conference, she said Kentucky was being praised for a drop in the opioid crisis.

Opioid deaths had fallen 24% in Kentucky as of Wednesday, according to an article from Bloomberg Law.

“That was the first time Kentucky made good headlines,” Pedigo said. “We’re making good progress and we’re just getting started.”

After watching politics her whole life, Pedigo also said she is unaware of another governor who was as close with the president as Bevin.

Nita Capello from Georgetown said this is her second Trump rally. Her first was in Richmond. She said the “energetic and electric” atmosphere is one of the reasons she attended the event Monday.

“You’re not hiding in the closet afraid to say anything,” Capello said.

While not a huge supporter of some of Bevin’s issues, Capello said he is preferable to Beshear who she considers too socialist. She also said Trump and Bevin’s relationship is influential to her, and will likely help the governor win.

“I wasn’t a Bevin fan at first but now I am,” Capello said.

Read here to find out what else Trump said during his rally.

Each strongly encouraged everyone to vote all Republican, while recognizing the diversity within the ticket.

Despite the close ties between Bevin and Trump, Lasley said the outcome of Kentucky’s gubernatorial election will not mean any definite result in the 2020 presidential election.

“If Bevin loses I don’t think it has anything to do with Trump,” Lasley said.