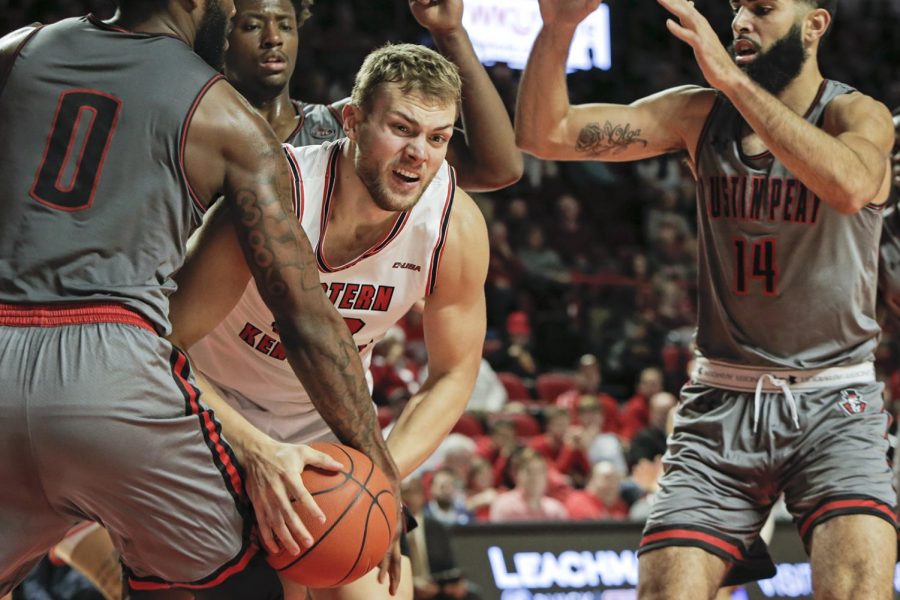 WKU redshirt junior forward Carson Williams (22) tries to keep control of the ball against Austin Peay on in E. A. Diddle Arena on Saturday, Nov. 9, 2019.

The WKU men’s basketball team (3-0) traveled to in-state rival Eastern Kentucky (2-2) on Friday night, and the Hilltoppers knocked off the Colonels 79-71 on the road and notched their third straight victory to start the 2019-20 season in Alumni Coliseum in Richmond.

WKU has now started the year 3-0 for the first time since the 2007-08 season, which was the same year the Hilltoppers made a run to the Sweet 16 round of the NCAA Tournament.

“In today’s basketball, it’s never easy to go anywhere and win on the road,” head coach Rick Stansbury said in a release. “We knew what we were walking into. We knew this was a monster game for them, and we were going to get their best shot. But I’m awful proud of our kids for the way we responded, and we did it in different ways.”

The Hilltoppers were led by the energy they received from their bench, as three WKU reserves combined for 28 total points.

Freshman guard Jordan Rawls was perfect from the floor, shooting 5 for 5 and knocking down a couple of 3-pointers, giving him 14 points.

“Coach told me and Josh to be ready,” Rawls said in a release. “Tonight we had to produce even more because we had certain guys not making shots, and we had Jared go out with an injury. We wanted to just come in and make contributions.”

“We knew we were going to get some minutes coming into practice because of how they press and speed people up,” Anderson said in a release. “We knew our guys would be tired, so we came into practice focused and ready to play.”

EKU forced the Hilltoppers into a season-high 23 turnovers, allowing the Colonels to capitalize and score 24 points off WKU turnovers.

Sophomore center Charles Bassey picked up his second straight double-double, collecting 18 points and 12 rebounds while shooting 9-of-13 in 26 minutes of game action.

EKU guard Jomaru Brown led the Colonels by scoring a career-high 41 points, shooting 16-of-28 from the field in 37 minutes of action.

Bassey opened the game with a huge dunk for WKU, coming off a pass from graduate guard Camron Justice. Bassey started 2-of-2 from the floor, giving the Hilltoppers an early 6-2 lead.

Brown scored the first six points for EKU, and he led the Colonels with 20 points at halftime.

The Hilltoppers and EKU traded baskets for the early minutes of the game, but redshirt senior wing Jared Savage finally knocked down WKU’s first 3-pointer of the game after the team missed its first three attempts from behind the arc.

Savage hit another three just minutes later, giving the Hilltoppers a 15-8 lead at the 15:04 mark.

The Colonels were hitting the three-ball early, as EKU shot 4-of-8 from behind the arc at the 11:27 mark of clock time.

Bassey faced early foul trouble after he picked up his second foul of the half at 8:41 mark, forcing Stansbury to sit Bassey for the remainder of the half.

Junior guard Taveion Hollingsworth was also in foul trouble for much of the first half, as he picked up two fouls and only played nine of the game’s first 20 minutes.

The Hilltoppers played solid defense for much of the first half, causing EKU to turn the ball over eight times at the 7:39 mark of clock time.

WKU started to pull away from the Colonels late when  Williams scored his sixth point of the night, netting an easy layup to give the Hilltoppers a 33-25 lead at the 4:30 mark of the opening frame.

Savage checked out of the game at the 3:39 mark with an apparent injury, but the Hilltoppers started a 10-0 run when Anderson slammed it home. WKU eventually reached its largest lead of the first half at 38-29, as Anderson tallied another spectacular dunk.

Rawls and redshirt freshman guard Jeremiah Gambrell then hit 3-pointers on back-to-back possessions to give the Hilltoppers a 44-29 lead at the 2:20 mark.

The Hilltoppers closed out the half making six of their last seven baskets, leading the Colonels 45-34 at the end of the first half.

Rawls gave the Hilltoppers a huge boost off the bench in the first half, scoring 10 points and shooting a perfect 4-of-4 from the field.

Savage led all WKU starters with eight points in the first half, but he didn’t return in the second half because of an ankle injury.

EKU began the half on a 5-0 run, before Bassey pulled down an offensive rebound and dunked it in for his eighth point of the night at the 18:16 mark.

Bassey and Williams combined for several baskets early in the second half, helping the Hilltoppers maintain a double-digit advantage.

After starting the game hot from distance, the Colonels struggled to shoot from behind the arc, missing 12 of their last 13 3-point shots until Ty Taylor hit a 3-pointer for EKU at the 5:03 mark.

WKU showed a 2-3 zone coming out of a media timeout in the second half, and the Colonels turned the ball over right away for their 17th of the night.

EKU ended the game with 19 turnovers, while the Colonels’ full-court press forced WKU to turn the ball over 23 throughout the game.

WKU jumped out to its largest lead of the game at 7:49 mark, as Rawls made both of his free throws to give the Hilltoppers a 69-51 lead.

Justice scored his first point of the night from the charity stripe at the 5:18 mark. Justice went 0 for 5 on the night, with all those misses coming on attempted 3-pointers.

EKU’s full-court press forced the Hilltoppers to turn the ball over once again, and a three-point play by Brown trimmed the WKU lead to just 74-62.

Bassey quickly responded with his fifth dunk of the night on WKU’s next possession, pushing the Hilltopper lead back to double-digits.

The closest EKU would get to WKU’s lead came with just 13 seconds left in the contest, when Brown hit a 3-pointer to cut WKU’s lead to 78-71.

WKU eventually hung on to secure an eight-point win over the Colonels, increasing its lead in the all-time series to 114-44.

The Hilltoppers have now won 15 of their last 16 games against the Colonels.

Following the win, WKU will be back in action at home against Campbellsville on Monday night.

The Hilltoppers and Tigers will square off in Diddle Arena at 7 p.m.