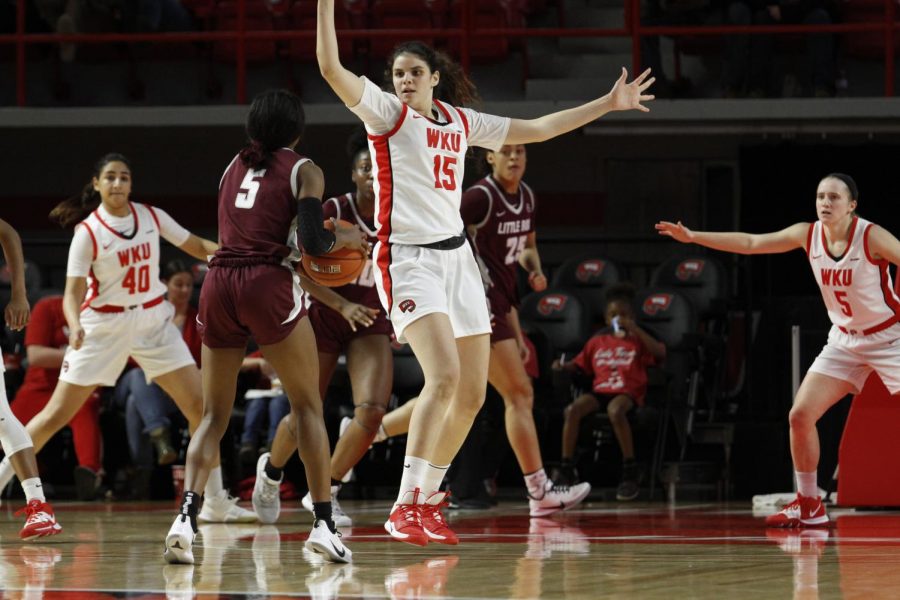 The WKU women’s basketball team (4-1) handled preseason Sun Belt Conference favorite Little Rock (1-5) in a 77-58 home win on Sunday afternoon, as the Lady Toppers picked up their fourth victory over a 2019 NCAA Tournament team this season in Diddle Arena.

WKU had an outstanding game from the field, shooting 54% overall, 46% from behind the arc and 82% from the free-throw line.

The Lady Toppers dominated the paint throughout the game, winning the rebounding battle 35-27 and outscoring the Trojans in the lane by 18 points.

Junior forward Raneem Elgedawy had a huge game offensively, putting up 22 points and 10 rebounds. Senior point guard Whitney Creech continued to impress with her scoring numbers and efficiency by dropping in 17 points on 8-of-12 shooting from the field.

South Georgia Tech transfer Fatou Pouye had a breakout game for the Lady Toppers by scoring 13 and grabbing seven rebounds in 20 minutes of action.

“Little Rock is well-coached,” Collins said. “Their players are always tough and tough-minded, and I feel like early in the game we did not match their intensity or toughness. I’m really proud about how our team came out in the second half. We played as tough as they did.”

Little Rock struggled at times offensively and put up average shooting splits against the WKU defense. The Trojans shot 41% from the field, 43% from three and 69% from the charity stripe.

Little Rock’s hounding defense and physical style of play allowed the Trojans to collect 20 turnovers from the Lady Toppers, turning those takeaways into 16 points on the other end.

Senior guard Kyra Collier played all 40 minutes of the contest and scored 22 points on 15 shots during that stretch. Junior forward Teal Battle scored 21 points of her own and secured five rebounds. Collier and Battle accounted for 74% of their team’s point total in the loss.

The game started furiously, as redshirt senior forward Dee Givens snatched the opening tip from the Trojans, took it into the lane and scored the first points only four seconds into the game.

The scoring pace only kicked up from there, as Elgedawy attacked from both the paint and behind the arc hitting her first three shots and dropping in seven points.

Creech and Givens also poured in four points each and helped WKU to 78% shooting from the field before the first media timeout.

Little Rock called a timeout with 4:24 left in the first period to stop the Lady Topper attack and came out of the break on fire by ripping off a 7-2 run.

The WKU lead was cut to two, and Collins called a timeout with 1:46 left to regroup his team and allow Abdelgawad and Elgedawy to catch their breath before the second quarter.

Both teams traded buckets to conclude the first 10 minutes of action. Creech drained a deep floater from the baseline with five seconds left to extend the Lady Topper lead to four and push her point total to six for the quarter.

Following an exciting and high-scoring first quarter, both teams struggled to put up points early in the second.

Both sides held scoring droughts of over three minutes each until redshirt sophomore Krystan Vornes finally knocked down a free throw for the Trojans with 6:13 left in the second quarter.

The next two minutes leading into the media timeout with 4:02 left in the second were sloppy and intense, as the Lady Toppers were forced into three turnovers and Little Rock missed three straight shots from the field.

Creech ended the electric stretch of play with a monster block on Little Rock guard Sydney Chastain to stop the Trojan fast break.

But Little Rock was not phazed, putting together a 9-0 run of its own and taking its first lead of the game with 3:01 left in the half.

Creech said she knew there was something off about the Lady Toppers in the second quarter after giving up the big run to the Trojans.

“Going into that second quarter, we just lost our focus,” Creech said. “They were tougher than us and more physical than us, so we had to really lock in on the defensive end.”

With the Lady Toppers down four and only 2:10 left in the quarter, junior guard Sherry Porter drilled a deep 3-pointer to cut the lead to one. WKU ramped up the defensive intensity and played with reckless abandon forcing back-to-back Trojan turnovers.

Cairo, Egypt, native Meral Abdelgawad attacked the lane and finished a tough reverse layup to cut the WKU deficit to one.

Elgedawy followed a steal by Creech with her second 3-pointer of the game and reclaimed the lead for WKU going into the half.

The Lady Toppers took a 35-33 lead into the half thanks to 14 points from Elgedawy and seven from both Givens and Creech. Collier scored 14 of her own to spearhead the Trojan offensive attack and get them back into the game going into the break.

Collins challenged his team to match the toughness and physicality of Little Rock during the halftime break.

“What we talked about in the locker room is that if all the fans left, the referees left the court, it was just Little Rock and us and we are just going to play a game, how would you play?” Collins said. “We were trying to play like you do at the park or at the YMCA. We just wanted to go toe-to-toe.”

The second half began with both teams playing aggressively on the defensive end and forcing the offenses into difficult shots. Little Rock hit only 36% and WKU made only 42% of their shots before the 4:36 mark in the third.

The Trojans tied the game up with 4:49 left in the third quarter, but the Lady Toppers answered and regained complete control of the game. WKU amassed an 11-4 run and forced Little Rock to call a timeout with 1:55 to play in the third.

The Lady Toppers went into the Trojan timeout on fire from the field, as they hit their previous six shots and built a seven point lead.

WKU continued this shooting performance after the break by hitting two more shots to finish the quarter hitting their final eight shots and gaining an 11-point lead before the final 10 minutes.

Pouye missed the first shot in exactly eight minutes for the Lady Toppers, but recovered her own miss to score the first points of the quarter for WKU.

She then hit two free throws, added another offensive rebound and put-back and netted a deep 3-pointer to push her to double figures in scoring for the first time this season.

The Trojans finished the game with a flurry, putting together a 6-2 run to cut the Lady Topper advantage to 19 by the end of the fourth.

But WKU used huge games from Elgedawy and Creech to hold on and propel the Lady Toppers to yet another blowout win against a solid opponent.

Following the win, WKU will get a few days off before travelling to Moraga, California, to participate in the Saint Mary’s Thanksgiving Classic next weekend.

The Lady Toppers will play two road games as part of the event, first meeting Tulsa (2-2) on Friday at 2 p.m. before squaring off with Saint Mary’s (2-2) on Saturday at 4 p.m.