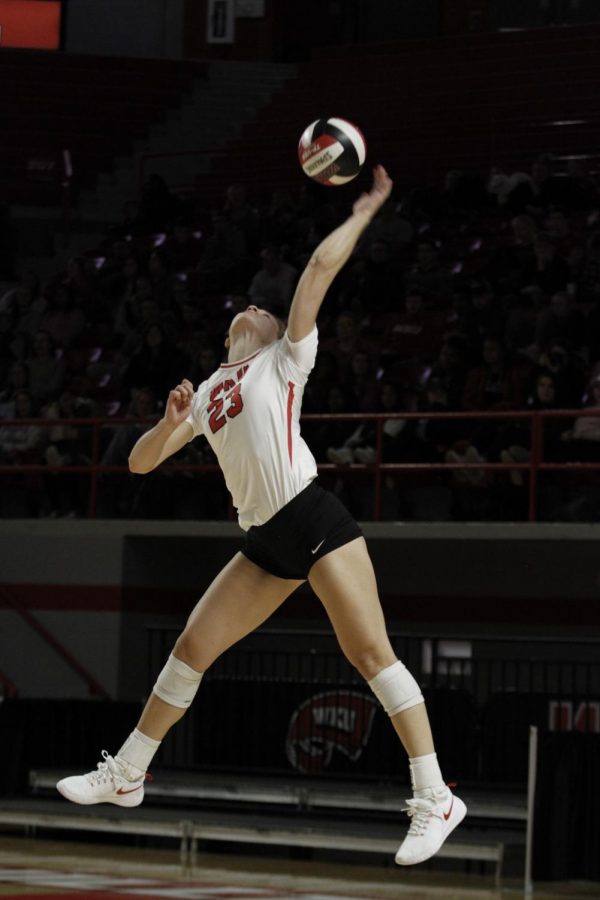 The WKU volleyball team (27-1, 13-0 C-USA) continued the best start in program history against Louisiana Tech (13-14, 3-10 C-USA) on Thursday night, as the Lady Toppers recorded a hard-fought win in straight sets to tally their NCAA-best 19th sweep of the season.

No. 19 WKU is now on a 23-match winning streak and has clinched at least a share of the Conference USA regular season title. Another win for the Lady Toppers in their season finale this weekend will secure an outright C-USA crown for the program.

Another home win also moved the Lady Toppers to a perfect 14-0 record in front of the Diddle Arena faithful this season.

“I think our kids were excited to be in this environment,” head coach Travis Hudson said. “They knew what was on the line and when it didn’t come easy, I think we got a little bit tight. We persevered and found a way, and I’m really happy and proud to have at least part of this championship.”

Senior Sophia Cerino broke the single-season school record for aces in a season to open the match’s second set, surpassing the previous record of 64 aces set by Cindy Bradley in 1991.

Cerino currently has 69 service aces this season after recording six aces against the Lady Techsters.

The Brentwood, Tennessee, native also poured in six kills and six digs for WKU during her record-breaking evening.

The teams started the game trading points, with WKU taking an early 10-9 advantage.

The Lady Techsters kept the Lady Topper offense from taking control early on, holding freshman Paige Briggs to a 1 for 8 start.

But WKU stayed aggressive in its attack and later went on a 7-1 scoring run to claim a 25-16 set win. The Lady Toppers also outgained LA Tech in kills during the opening set, 15-8.

“I didn’t even know that it was even possible tonight … so having that announced I was kind of shocked,” Cerino said. “[It was] a really cool feeling, being able to accomplish that is amazing. I never could’ve dreamed about accomplishing that.”

The Lady Toppers then went onto a 6-0 scoring run to put them up 21-13, and it ended up being too much for the Lady Techsters to overcome — even after LA Tech was able to inch closer to the Lady Toppers at 23-19.

LA Tech came out and took an early 8-5 lead in the third set, forcing a WKU timeout.

The teams then traded blows until the score was tied at 13-13, setting off a chain reaction of ties and lead changes until the Lady Techsters finally stopped play by calling a timeout down 18-17.

Both teams battled for momentum, but WKU pulled away late and claimed the decisive set over the Lady Techsters, 25-21.

Following the win, the Lady Toppers will wrap up C-USA play and conclude their regular season slate at home against Alabama-Birmingham (12-14, 4-9 C-USA) on Saturday afternoon.

WKU will host its Senior Day festivities prior to its match with the Blazers, as seniors Cerino and Emma Kowalkowski will both be recognized in a pre-match ceremony before the duo plays their final match in front of the Diddle Arena crowd.

The Lady Toppers have already faced off  against the Blazers once this season, with WKU torching the Blazers for a clean 3-0 sweep on the road in Birmingham, Alabama, on Oct. 25.

WKU didn’t give up more than 16 points in a set during that contest, and the Lady Toppers also posted their best hitting percentage game of the season with an eye-popping .458 mark.

Game time is set for noon on Saturday.