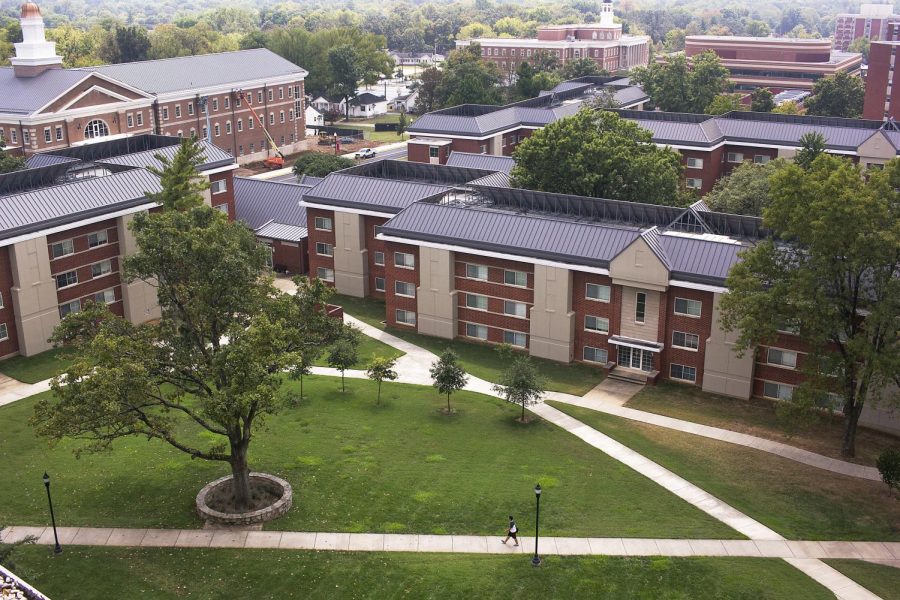 A student walks between Northeast Hall and Grise Hall Monday, Sept. 7. WKU was the only Kentucky school to be recognized by the National Wildlife Federation Guide for the university's role in protecting wildlife and restoring habitats in campus green space on and off campus.

Several buildings across WKU’s campus were left without heat over the weekend, and some aren’t likely to have it fully restored until the end of the day Tuesday.

A heat exchanger in the east wing of Northeast Hall failed as facilities prepared for heating season last week, according to Bob Skipper, WKU’s director of media relations. Facilities ordered the replacement part on Wednesday, and it is expected to arrive and be installed by the middle of this week.

Skipper said the south, west and north wings began slowly receiving heat from the steam line over the weekend.

“While the line is not currently supplying heat at its full capacity, it is expected to do so in the next 18-24 hours [some time Tuesday],” Skipper said on Monday. “There is enough steam to keep the temperature in the rooms in the upper 60s.”

Skipper said 563 students were affected in Northeast and Southwest.

Cassidy Howell, a sophomore criminology and biology double major, was one of the students who elected to stay in Southwest over the weekend.

“I was in Minton last year when everyone was forced to move out, and I didn’t want to go through that again,” Howell said. “ It was almost unbearable.”

Howell said she experienced difficulty sleeping due to the cold temperatures in the dorm, and she tried to stay out of her room for the majority of the weekend.

“The temperature of the rooms felt like you were still outside,” Howell said. “I literally was wearing three or four layers at all times.”

WKU Housing and Residence Life notified residents on Friday that Southwest’s heating, air conditioning and ventilation system suffered critical failures. This forced the heating system to be shut down.

Skipper said the efforts to provide heat to these residence halls put Facilities a day behind in providing steam to the academic and administrative buildings on the upper steam loop, which included Cherry, Gordon Wilson, Potter, Wetherby, Garrett, Grise, EST, the Industrial Education Building and Cravens.

These buildings are in the process of gathering pressure, Skipper said.

“Once pressure is reached, Facilities will begin the conversion from cooling to heating in those buildings,” Skipper explained in an email. “They are all expected to have heat by the end of the day Tuesday.”

An unrelated issue with a water line break outside the Heating Plant required the shutdown of the steam line to the Valley, which affected Rodes-Harlin, McCormack, Hilltopper and Gilbert.

“As soon as the trench work is complete the steam will be back on [Monday] evening to heat the buildings overnight,” Skipper said.

Temporary relocation was offered to students due to the expected low temperatures for the weekend, though HRL also stated residents were welcome to remain in their rooms. Skipper said that no relocations had been reported.

In its email, HRL recommended students take the following measures for their comfort until the HVAC system is restored:

• Place your fan setting on low or in automatic mode. This setting will most efficiently permit heat to circulate within your room without causing cold drafts from higher fan speeds.

• Keep your windows and doors closed.

The email also reminded residents that space heaters are prohibited within dorms due to the fire hazard they pose.