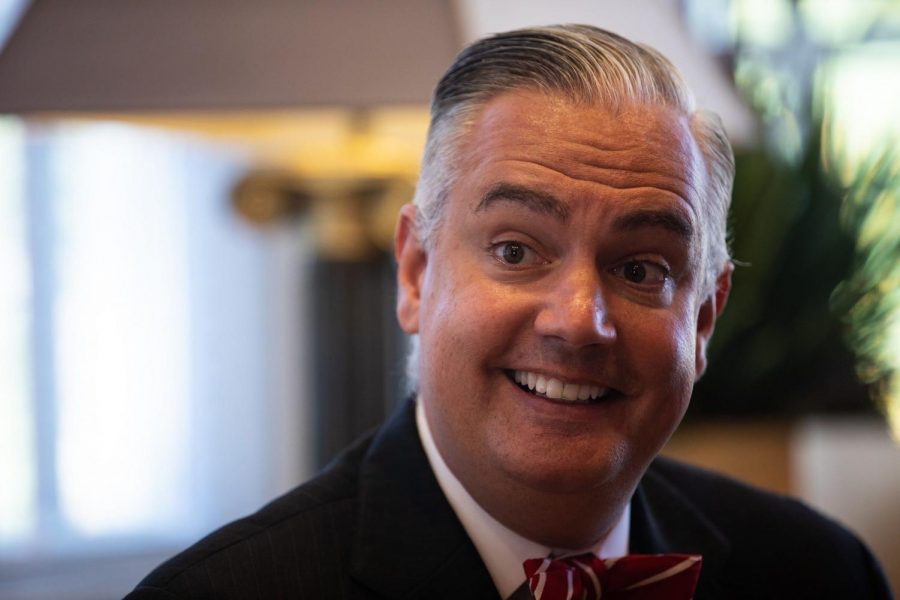 President Timothy Caboni holds a press conference to announce a change in enrollment and scholarship requirements for incoming students as well as expansion of existing scholarships.

WKU is showing growth in out-of-state first-year enrollment and retention despite a decrease in total headcount, WKU President Timothy Caboni said in an email on Thursday.

He championed the faculty’s work both inside and outside classrooms to improve academics.

“The work you do within your offices, departments, and colleges will ensure we reach our aggressive retention and graduation goals while we continue to achieve meaningful transformation in the lives of our students,” Caboni wrote in the email.

Caboni corroborated “meaningful transformation” with some promising numbers: in spite of a drop of roughly 1,000 students in headcount since last year, full-time student retention jumped three percent, with a 4.2% increase in retention for low-income students specifically, to 72.9%. This tracks with Caboni’s “aggressive goal,” of reaching 80% retention by 2028.

The president also noted a 7.2% increase in “first-time, first-year, out-of-state students”, a part of the university’s budget initiative to focus on tuition revenue instead of headcount. The budget will thusly see no further changes, according to Caboni.

First-year students in the fall of 2019 have proven to be the most academically sound as well. Following a record-breaking 3.39 average GPA from incoming freshmen in August 2018, 2019’s freshmen have broken through again with a GPA average of 3.42. This aligns with Caboni’s hope to recruit more “future graduates.”

“And because we know high school GPA remains the strongest indicator of college success for beginning freshmen, we celebrate this upward academic momentum as it clearly supports our mission as an institution,” Caboni said.

“Our work is never done, but as we continue our climb to greater heights, we should take time to celebrate our significant progress in retention and financial stability while advancing the goals outlined in our strategic plan.”

WKU recently dropped the ACT requirement for scholarships. Caboni’s comments at a  press conference in September to explain the change echoed his Thursday email.