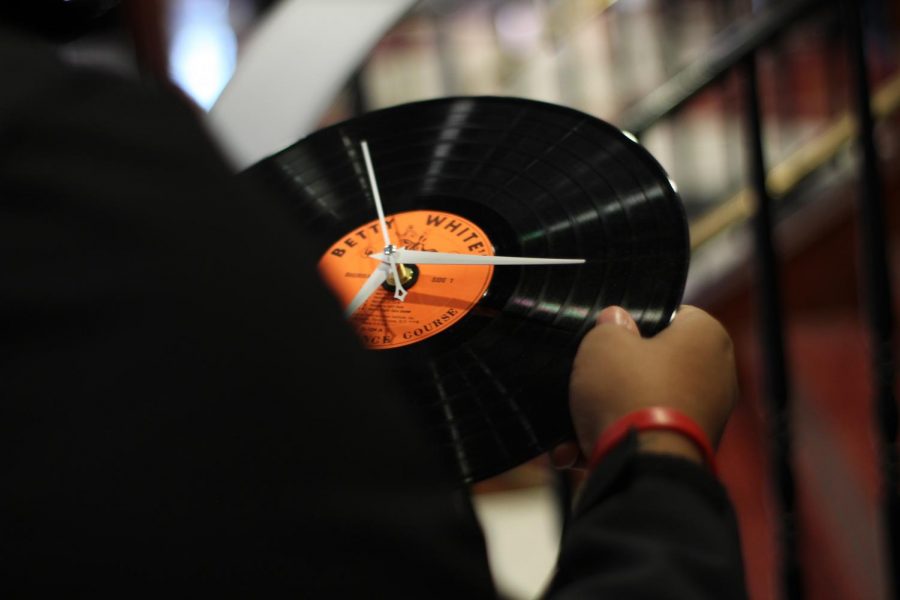 Visitors to the "Market on the Anevue" information fair could learn about "upcycling" by making clocks out of old vinyl albums. Upcycling involves creating new, more usable items out of old, underused items.

Visitors to WKU Sustainability’s Market on the Avenue event learned about lowering their impact on the environment, saw the benefits of upcycling and made clocks out of unused vinyl records.

“We are hoping to teach WKU how to have a greener holiday through giving memories, giving their time and skills,” said Courtney Martin, assistant coordinator for WKU Resource Conservation.

Martin also spoke about “upcycling,” which involves taking objects which are unwanted or unused and using them to create new items.

Visitors to Martin’s booth made clocks out of old vinyl records which were donated by WKU Libraries.

“This is one way we’re demonstrating how items can be upcycled into something functional,” Martin said.

Cara Walters, graduate assistant for the Office of Sustainability, was leading a booth focusing on ways to be economically sustainable. Walters said economic sustainability is an important aspect of sustainability.

Walters also said it is important to know how much is spent, since overspending on sustainability is not efficient.

“We also have to be mindful of the amount of regulation that we put into effect,” Walters said. “We still have to have controls over the environment.”

Also participating in the fair was Madonna May, sustainability coordinator for the WKU Restaurant Group. May said one of the sustainable focuses of the restaurant group is on bringing in more locally grown produce.

“We’re trying to get more local produce from local farmers, that way everybody has a chance locally to participate here on campus,” May said.

“We have already composted over 300,000 pounds in a year and a half,” May said. “We try to recycle as much as we can, even with the other brands. A lot of it is working with the community.