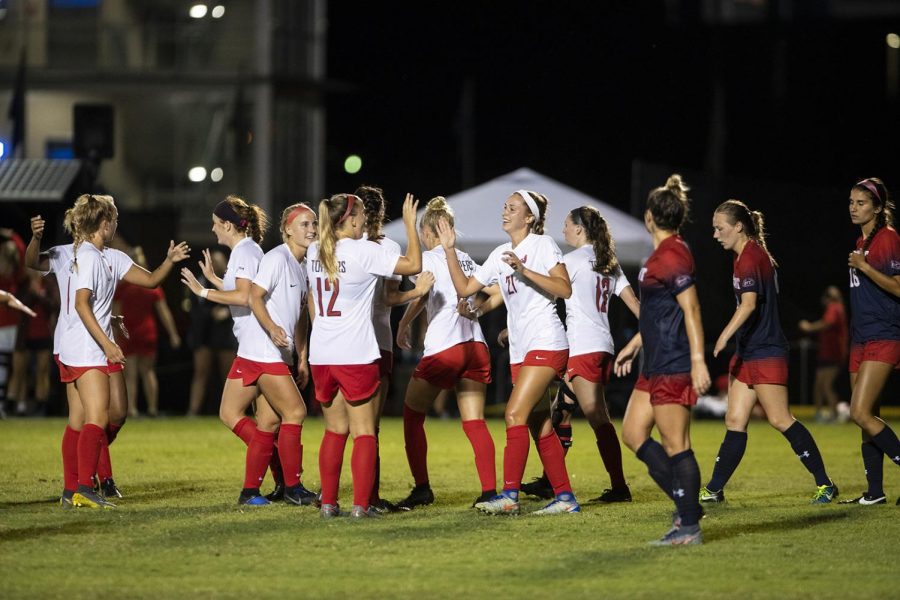 The WKU soccer team celebrates scoring a goal against Belmont during the season opener at the WKU Soccer Complex on Thursday, Aug. 22, 2019.

The WKU soccer team (10-6-1, 6-4 C-USA) added one final tally mark to the win column in Huntington, West Virginia, on Friday night, as the Lady Toppers closed out the 2019 regular season with an impressive 3-1 victory over the Marshall Thundering Herd (4-14, 2-8 C-USA).

With the annual Conference USA Tournament set to begin on Wednesday, the Lady Toppers will now be heading off to Denton, Texas, on a two-game winning streak.

WKU finished the year with 18 total points, earning the No. 5 seed in the eight-team C-USA Tournament.

The Lady Topper soccer program ended a two-year C-USA Tournament drought by making it into the 2019 field, as WKU hasn’t appeared in the postseason event since the 2016 edition.

Despite appearing in 2014, 2015 and 2016, the Lady Toppers have never won a C-USA Tournament game in their three prior trips.

Seventh-seeded WKU lost 1-0 to second-seeded Rice in 2014, the eighth-seeded Lady Toppers fell 1-0 to first-seeded North Texas in 2015 and third-seeded WKU was topped by sixth-seeded Charlotte 4-1 on penalty kicks in 2016.

The program will aim to avenge its prior postseason losses when the 2019 Lady Toppers take the field at the Mean Green Soccer Complex this week.

WKU made one final pit stop on its road to the postseason over the weekend, securing the team’s first 10-win season since 2016 and the 14th 10-win season in program history.

“Tonight was a great team effort,” head coach Jason Neidell said in a release. “I think we played 20 players, and all contributed positively to the game. It was great to see Lucy Lyon and Isidora Pekez get their first career goals. Our kids are excited about the conference tournament next week, and we eagerly turn our attention to those preparations.”

Redshirt freshman midfielder Lucy Lyon broke the ice early, tallying her first career goal as a Lady Topper at the 19:29 mark to take a 1-0 advantage over the Thundering Herd.

Following the early lead, the Lady Toppers wasted no more than two minutes to strike again.

This time, junior forward Ashley Leonard booted in a free kick over sophomore goalkeeper Lindsay Langley’s head at the 21:51 mark for her team-leading eighth goal of the season.

After falling behind 2-0, Marshall split the difference before the halftime break with senior forward Marah Abu-Tayeh’s team-leading ninth goal of the season at the 30:19 mark.

At the break, each program had two shots saved by their respective goalkeepers and the Lady Toppers led 6-4 in attempted shots.

Redshirt sophomore Deven Jackson fired a shot on goal 50 seconds into the second half of action, but it was saved by Langley.

Both teams were held scoreless most of the second half, but sophomore midfielder Isidora Pekez closed up the regular season scoring with her first career goal as a Lady Topper in the 77th minute.

Pekez’s milestone goal was assisted by Jackson, who picked up her third assist of the year when she found Pekez outside the 18-yard box.

Redshirt senior goalkeeper Anne-Marie Ulliac made two saves in the first half to bring her total stops to 67 on the year. Freshman goalkeeper Ashley Kobylinski came on to relieve Ulliac in the second half, playing 28 minutes for the Lady Toppers.

The Lady Topper defenders blocked two shots to aid their goalkeepers, helping the team hold onto a second-half shutout for a key victory on the road against the Thundering Herd.

Following a win in its regular season finale, fifth-seeded WKU will meet fourth-seeded Charlotte in the quarterfinals on Wednesday afternoon. The winner of that match will face either No. 1 Florida Atlantic or No. 8 Louisiana Tech in the semifinals on Friday.

Despite an early goal by sophomore midfielder Ambere Barnett just 2:10 after play began, the Lady Toppers stumbled against Charlotte and suffered their first C-USA loss of the season.

“Overall, we didn’t have enough players bring their A-game, and when you play a good team like Charlotte everyone’s got to be on their A-game to get the win,” Neidell said postgame.

WKU suffered a heartbreaking loss to Charlotte — the eventual 2016 tournament champion — the last time the two teams met in postseason competition, ultimately wasting its highest seeding in a conference tournament since joining C-USA prior to the 2014 season.

The Lady Toppers will look to avoid a similar fate in their latest first-round matchup against the 49ers when WKU meets Charlotte for the second time this season on Wednesday at 2 p.m.

All seven games of the C-USA Tournament will be streamed live for ESPN+ subscribers.