Decision Day: Where the gubernatorial candidates stand on 3 key issues on Election Day 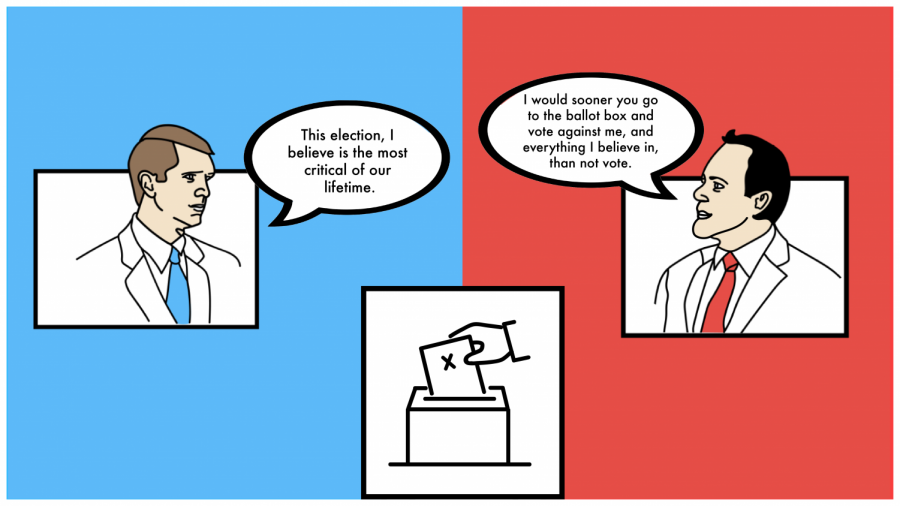 On Tuesday, Kentucky voters will head to the polls to vote for the next governor. Here’s how the two candidates stack up on issues related to education and students.

Kentucky was ranked the eighth-worst state in the nation in higher education affordability in a report by the Center on Budgets and Policy Priorities.

In 2016, Bevin changed university funding allocation to a performance based model.

Bevin has related WKU’s budget issues to state-wide difficulties and said the solution is being selective with funding.

“I’ve talked to them about this,” Bevin said in the meeting. “To Dr. Caboni and others, I’ve said ‘listen, prioritize, find where you truly must invest in order to give the best return on investment to students for their tuition dollars.’ And other things have to play second fiddle, not because we wish they couldn’t all be on the front, but there just isn’t enough money for them.”

He also encouraged Kentucky universities to cut programs that don’t fill high demand jobs while at a higher education conference in 2017.

In the Oct. 15 gubernatorial debate, Beshear said higher education would be a major priority for his administration. He also noted his history fighting allocation cuts made by Bevin.

“I don’t just believe in higher education, I’m willing to fight for it,” Beshear said. “Ninety days into my term as AG this governor illegally cut the budgets of all our universities and community colleges, but I stood up to him. We won. We returned $18 million where it belonged.”

Beshear also said in a January meeting with the Herald Editorial Board that the state needs to significantly increase funding for higher education to make it affordable for all Kentuckians. Rather than cutting courses, he said the state should make sure public universities have all the courses they need.

While surrounding states as close as Ohio are rethinking laws on marijuana use, both candidates have spoken on the future of the drug in Kentucky.

In an Aug. 1 radio interview, Bevin criticized the legalization of medical marijuana. He claimed recreational use of the drug would lead to an increase in homelessness, emergency room visits and “disease.”

Additionally, Bevin said the new tax revenue from marijuana sales would not be enough to fund the pension system.

“It’s not a serious solution,” Bevin said in the interview. “It’s not even a solution at all. It’s a ridiculous proposal.”

Prior to the interview, Bevin said he would sign a bill to make medical marijuana legal, depending on how the bill was written. At the time he said medical marijuana is preferable to other pharmaceutical drugs.

Beshear supports legalizing medical marijuana, according to his campaign website. One reason he cited is the connection to the state opioid crisis.

“So many Kentucky families have seen a loved one fall into addiction, and their lives have been devastated,” Beshear wrote on his website. “If medical marijuana is an alternative and gives people the chance to get pain relief without being subjected to opioids, I think it’s something we’ve got to explore.”

Beshear favors holding a statewide referendum on the issue, and directing revenue from medical marijuana to the pension system.

Kentucky has faced significant pension issues in recent years, as Bevin has called the current pension system bankrupt and The Louisville Courier Journal reported in 2018 that the system had over $37 billion in unfunded liabilities.

During the Oct. 29 gubernatorial debate, the Associated Press reported Bevin pushing against Beshear’s plans to legalize casino gambling in order to help fund the pension system.

As governor, Bevin said on his website he has advocated for a more sustainable and dependable pension system. With a second term, he said he wants to “complete the fix of this system.”

“I won’t rest until the pensions are sustainable and can be counted on by our teachers and other public employees,” according to Bevin’s campaign website.

In the Oct. 15 debate, Bevin said he had respect for educators and noted teacher pensions have been fully funded during his time in office.

But Bevin has also battled with teachers in the press, claiming that their “sickouts” to protest the pension problems were harming students.

In Beshear’s meeting with the Herald, he said he supports expanded gaming, including casino, sports and online gambling. From the industry, he said he wants to dedicate all the revenue to pension systems.

He said he believes his ideas in expanded gaming could bring up to $500-$550 million a year to the pension system.

“Our public servants go to work everyday to keep our communities safe, educate tomorrow’s leaders—our children—or put themselves in harm’s way,” Beshear wrote on his campaign website. “The least we can do is protect the promised pension benefits they have paid into during their years of service.”

In the Oct. 29 gubernatorial debate, the AP reported that Bevin said he has no regrets about comments he has made about educators. In the debate, Beshear said teachers do deserve an apology and Bevin’s refusal to show regret should disqualify him from re-election, according to the AP.