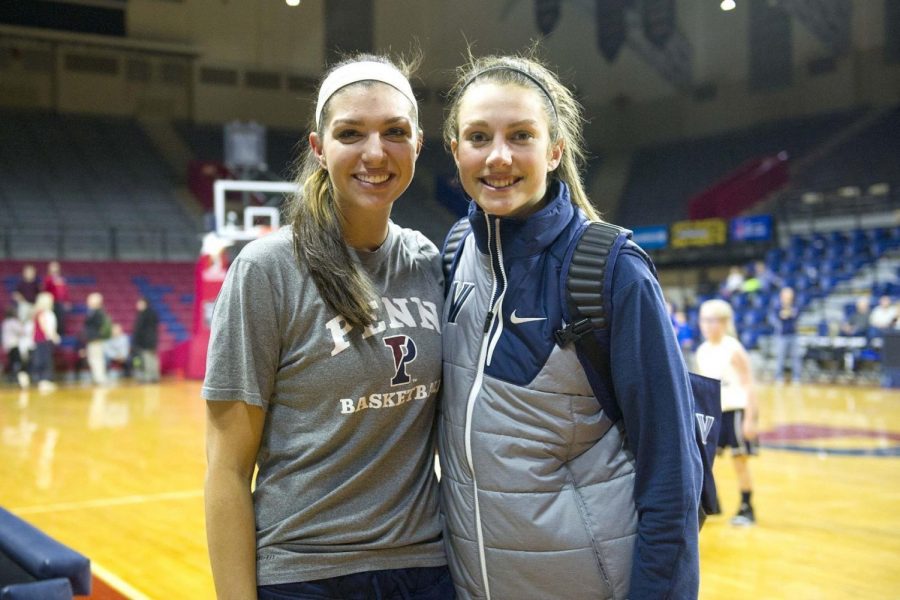 Kelly Jekot, right, starred at Cumberland Valley in high school. She announced Tuesday on Twitter she is transferring from Villanova, where she played three years, to Penn State for the 2020-21 season.

The former Cumberland Valley standout, who scored 2,000 points in high school and led the Eagles to three straight PIAA championships, announced Tuesday afternoon on Twitter she will transfer from Villanova, her collegiate home for the past three-plus years, to Penn State in January.

Jekot will join a PSU team led by new head coach Carolyn Kieger, a 2006 Marquette grad who coached her alma mater the previous five seasons. The Lions are currently 3-3 and play in the Cal Classic over Thanksgiving weekend.

Jekot will not play this season as she finishes recovering from a devastating knee injury she suffered in March. She said she plans to join the team in practice in the spring semester, but her one and only season with the Nittany Lions will be in 2020-21.

“The coaches definitely sold me. I just respect them so much,” she said. “And Coach Keiger, specifically, is very energetic and somebody I look up to already even though I don’t know her

She does not expect a starting role to be given to her but intends to compete for a major role on the team and be a leader in a “new stage in my life.”

Jekot said she decided to transfer after longtime ‘Nova head coach Harry Parretta announced in October this season would be his 41st and final year in charge. Parretta recruited Jekot to the Wildcats out of Cumberland Valley.

“I have nothing bad to say about Villanova, I’ve had a very positive experience,” she said. “I’m so happy I was able to come here and be successful.”

The announcement made Jekot think about her future. So, she put her name in the NCAA transfer portal and received interest from several Division-I programs, including North Carolina, No. 7 Oregon State — “That was pretty exciting,” she said — Notre Dame, West Virginia, George Washington, Dayton, Duquesne and James Madison.

She also got significant interest from St. Joseph’s, home of her younger sister, Katie.

But Jekot said she was ultimately swayed to Penn State because of Kieger’s track record at Marquette, a school Jekot played against the previous three seasons. Turning down St. Joe’s and Oregon State in particular was tough, Jekot said.

Jekot, who earned consecutive Gatorade Pennsylvania Girls Basketball Player of the Year honors her last two years at CV, played three seasons with the Wildcats, earning multiple Big 5 awards, including Big 5 Rookie of the Year. But in one of the last games of the 2018-19 season, a March 10 loss to Georgetown, she suffered a traumatic knee injury near the end of the game. She tore her ACL, MCL, PCL and lateral meniscus and also injured her hamstring.

The injury required surgery a few weeks later and cost her the 2019-20 season.

Jekot said her rehab, now seven months in, has gone well. She is doing straight-line running, some cutting and has been on the court. Next up is contact practices.

The time off the court allowed her to catch four of Katie’s games so far this season, which Jekot has enjoyed.

“It’s been really exciting,” Jekot said. “She’s doing great, especially coming off of her injury. … The first two games they won, and they were really good games. … She’s been a really good leader for her team.”

Jekot already earned her undergraduate degree in communications from Villanova in the spring and stayed through the fall semester to take graduate education courses. She plans to earn a master’s degree in educational leadership at Penn State. After school, she plans to play professionally and one day coach a women’s team or take on an administrative role.

Graduate students can transfer to another school and play immediately if they have already completed their undergraduate degree and have at least one more year of eligibility left. Jekot qualifies in both regards.

She has 990 career points with the Wildcats and should eclipse the 1,000-point mark when she retakes the court next season with the Lions. She averaged 13.8 points, 4.6 rebounds and 2.5 assists last season.