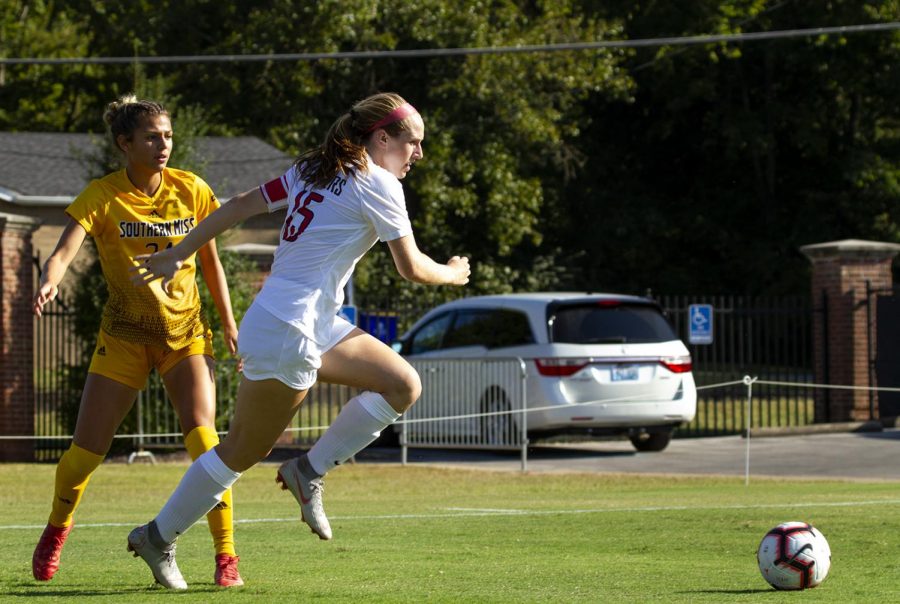 WKU sophomore Ambere Barnett (15) dribbles the ball against Southern Miss during the game on Saturday Sept. 21, 2019.

All of the C-USA postseason awards were voted on by the league’s 14 head coaches, according to a release.

WKU has had multiple players named to all-conference teams in all but one year since joining C-USA in 2014.

Barnett is tied for the leading points-earner for the Lady Toppers with 16 on the season, scoring five goals and notching six assists. Barnett also earned First Team and All-Freshman Team honors as a freshman last season.

She’s the league’s leading shot-taker, firing 70 shots on goal this season. That mark is a new WKU single-season record and ranks 25th in the nation. In addition, Barnett’s six assists are the fourth-most in the conference.

Bryant has been a staple on the WKU backline all season, and she’s utilized her ability to clear out shots to help the Lady Toppers shut out seven opponents, tied for the second-most in C-USA.

She and the defense have allowed 16 goals on the season, which is the fourth-fewest in the league. Bryant has been relied upon all season, logging the second-most minutes of any WKU player.

Cate got her collegiate career off to a strong start, scoring two goals in the Lady Toppers’ season opener against Belmont.

Since then, the rookie has scored three more times, including the game-winner in a one-goal match at Texas-El Paso.

The Lady Toppers are currently preparing for the postseason, with the quarterfinals of the C-USA Championship coming up this week.

All seven games of the C-USA Tournament will be streamed live for ESPN+ subscribers.