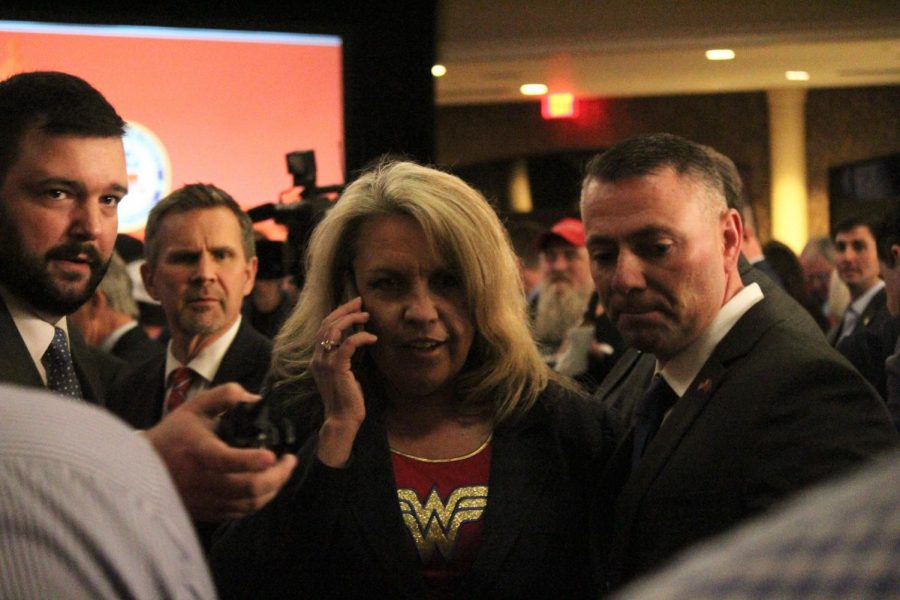 The woman who rushed the stage and unfoundedly declared Matt Bevin the winner of the gubernatorial election gets escorted out of the Galt House in Louisville on Nov. 5, 2019.

All the votes were almost in. With 98% of precincts reporting, it was close, but Attorney General Andy Beshear had a 0.97% lead.

A woman rushed the stage and took to the microphone to declare that Matt Bevin had won the gubernatorial election. The crowd exploded with joy, hugging, screaming, toasting the unexpected turn of events that would keep their preferred candidate in office for another four years.

He hadn’t won. The stage-rusher’s unfounded claim was one of several uncommon attributes of the Kentucky Republican Party’s watch party.

The event at the Galt House Hotel in Louisville began slowly. Attendees showed off their finest Donald Trump-related clothing and sipped expensive bourbon drinks from the well-stocked bars on either side of the Archibald Ballroom.

“Cautiously optimistic,” Erin Walter of Georgetown said of her feelings at the beginning of the party as vote totals were beginning to come in.

Erin and Steven Walter were largely in attendance to support Ryan Quarles, who was up for re-election as agriculture commissioner.

“We like the youthful energy he brings to that office,” Steven Walter said. “We like the various accomplishments he’s had through his first term.”

With regards to the Bevin election, Steven Walter said that he was optimistic, but expected it to be a close race.

“I think that race will be closer,” he said.  “We’ll have to see especially once the western Kentucky polls close, I think it’ll really be close. Especially with Lexington and Louisville being here, those aren’t really his strong base cities, so we’ll have to see what the rest of the state does.”

The results of the election were shown on two screens behind the stage, and cheers broke out when it was revealed that Bevin held the lead with 7% of the votes in, an advantage that increased over the next 45 minutes.

Shortly thereafter, the Walters got their wish and Quarles took to the stage for his victory speech.

“We put the tailgates down on our farm trucks and had a conversation about what’s going on across the Commonwealth,” Quarles said.

During the speech, the tide began to turn in the election. Lexington’s votes came in and Beshear jumped in front by 1.28 percentage points with 76% of the precincts reporting. At this point, the results and coverage that had been on the screen were turned off at a commercial break, never to return.

With the coverage replaced by a Republican Party of Kentucky logo set over a red background, the revelers took to their phones to figure out who was in the lead. As Beshear’s lead began to grow, the energy of the room dropped, buoyed only by the victory speeches of the other candidates in the rooms.

State Auditor Mike Harmon drew groans from the room when he opted to close his speech with an attempt at comedy, joking that if not elected, he would start a mirror-cleaning business, because it was something that he could see himself doing.

Just when it looked like Beshear’s lead was going to hold, the woman in the Wonder Woman t-shirt made her announcement.

The joy of the room held for several minutes, until the crowd realized that the woman had nothing to do with the campaign, and had simply jumped on stage and made an unfounded announcement.

“Why would you do that?” One attendee shouted at the woman, who took a call on her cell phone as she was removed.

A Republican employee then got on stage and told the party the campaign was still waiting on election results and imploring them to continue their festivities.

Attorney General-elect Daniel Cameron then gave the final victory speech of the night, drawing applause from some, but not all, of the attendees when he praised Senator Mitch McConnell.

“This is a man who has, in many ways, has changed the trajectory of my life,” Cameron said. “First as a McConnell Scholar, then as his general council in Washington, D.C. and then giving me the courage, amongst others of you in this room, to run for attorney general.”

Following several outlets calling the election for Beshear, Bevin took to the stage and refused to concede, citing what he said were “more than a few irregularities,” a claim that has not been verified, despite Bevin’s insistence that the alleged irregularities were “very well corroborated.”

“We want the process to be followed,” Bevin said. “The process will be followed and in the end we will have the governor that was chosen by the people of Kentucky.”

With that, the party was over.

Attendees slowly trickled out the door of the ballroom, some of them lingering to take pictures with Cameron, some of them looking at the image on screen, a tweet claiming that the race was too close to call, but most heading out, some of them more confused then when they entered.