Lady Toppers open regular season with loss at No. 9 Louisville 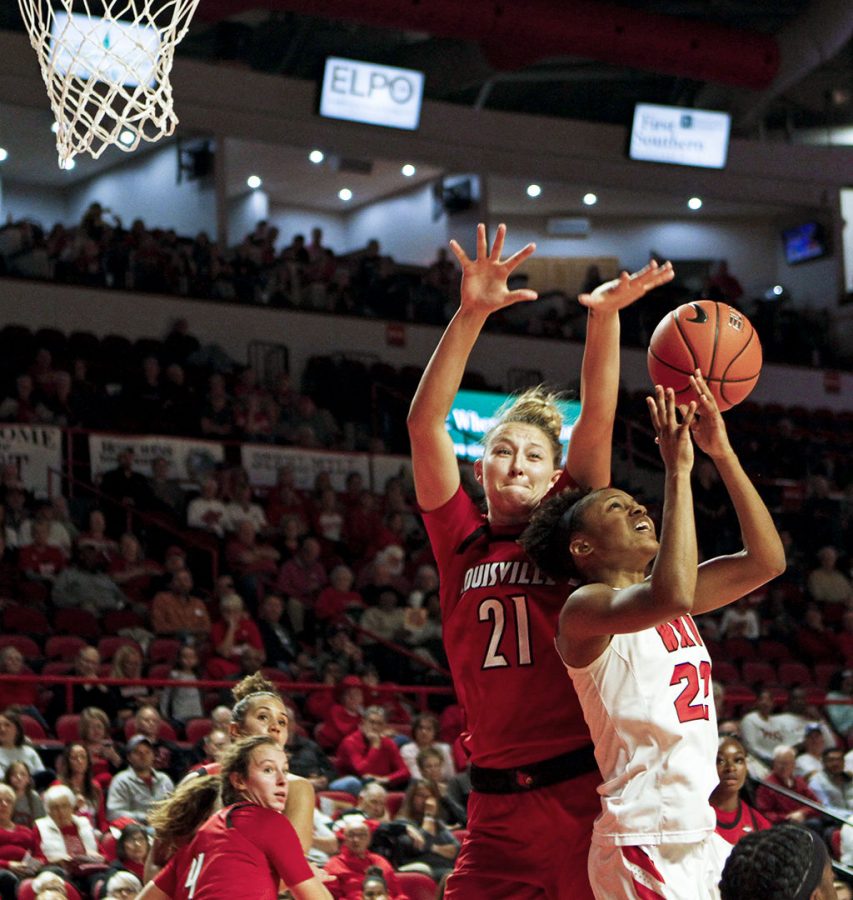 Lady topper sophomore Sherry Porter (25) attempts to shoot for two as she defended by Louisville forward Junior Kylee Shook (21) during the Lady Toppers' 102-80 loss in the first USA conference game against Louisville University on Tuesday Nov, 6, at the E.A. Diddle Arena.

The WKU women’s basketball team (0-1) experienced a tough 75-56 road loss at No. 9 Louisville (1-0) on Tuesday night in the KFC Yum! Center, as the Lady Toppers dropped their regular season opener to a ranked Cardinals squad for the second consecutive season.

WKU struggled shooting the ball for a second game in a row, posting shooting splits of 33% from the field, 32% from deep and 52% from the charity stripe.

The Lady Toppers amassed only seven assists over the course of the game, and they turned the ball over 17 times in defeat.

Louisville shot 49% on the game while knocking down eight 3-pointers in the process. Junior guard Dana Evans scored 19 points for the Cardinals, and Georgia Tech transfer Elizabeth Balogun scored 15 points on 5-of-6 shooting from beyond the arc.

Givens finished the night with 31 minutes compared to 19 minutes from Skinner.

Creech scored the first points of the game for the Lady Toppers when she finished a fast break layup following a Louisville turnover, giving WKU a brief 2-0 lead.

The Cardinals then proceeded to knock down seven straight shots before finally missing with 3:39 left in the first quarter. During that span they built an 8-0 run, and Balogun lit it up from deep with a trio of made 3-pointers.

The Lady Toppers stayed in the game by pulling down six offensive rebounds and forcing six turnovers, which led to five points on the other end.

Louisville cooled off at the end of the first, converting on only two of their last six shots, but they still carried a 21-13 lead into the second frame.

Both teams came out fighting in the second quarter by trading buckets and bringing more intensity on the defensive end.

The Cardinals went cold from the field, shooting only 6-of-18 in the second quarter, and continued to shoot themselves in the foot with four turnovers.

The Lady Toppers saw this as an opportunity to claw back into the game, and they ripped off a quick 6-0 run to cut the lead to 29-23 in favor of the Cardinals with 03:59 left in the half.

Louisville settled down after this quick spurt by WKU. The Cardinals knocked down two more shots, pushing their lead to 34-25 at the halftime break on a late 3-pointer from Balogun.

The shot pushed Balogun’s point total to 12 on 4-of-4 shooting from behind the arc.

Porter spearheaded the WKU attack on offense in the first half by scoring 13 of the team’s 25 points on 5-of-12 shooting. Elgedawy had a quiet first half with only three points, and Givens had yet to score in her 14 minutes of action.

The Cardinals started the second half on a roll draining their first three shots and going on a 7-0 run. The Lady Toppers struck back quickly, as Givens finally connected from the field with a 3-pointer with 8:00 left in the third.

Givens used the confidence from draining her first shot to be more aggressive offensively, as she drained another 3-pointer less than two minutes later. Givens then added two free throws to bring her point total to eight in the third.

The scoring went back and forth throughout the third quarter, with both teams jockeying for position. But Louisville was able to add to its lead due to WKU shooting 1-of-11 from the field in the final six minutes of the quarter.

Evans scored eight of her team’s 21 points in the quarter and helped push the Cardinal lead to 55-43 heading to the final period.

The Lady Toppers started the fourth quarter on a 5-0 run and trimmed the Cardinal lead to 58-48 before Louisville grabbed complete and total control of the game.

The Cardinals proceeded to go on a 12-1 run, extending their lead to 21 in under three minutes.

Givens drilled a 3-pointer following the timeout, but the Cardinals proved to be too much for the Lady Toppers down the stretch.

Louisville finished out its 19-point home victory over WKU and came away with a record of 1-0 to begin the 2019-20 season.

WKU will be back in action against Mercer on Friday night. The Lady Toppers and Bears will square off in Hawkins Arena in Macon, Georgia, at 3:30 p.m.

Reporter Jesse Spencer can be reached at [email protected]