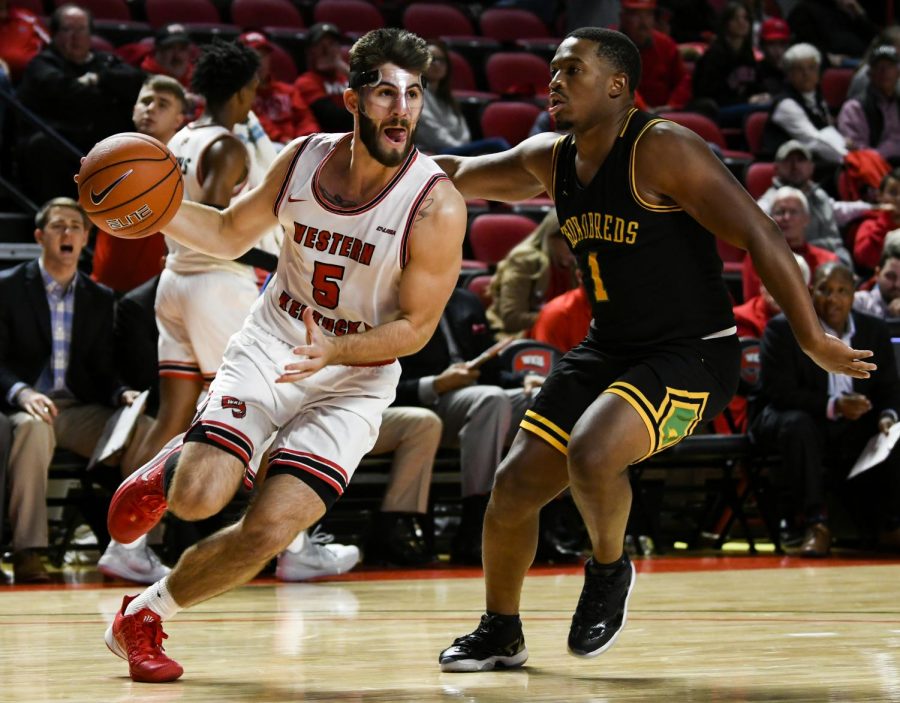 The WKU men’s basketball team (5-1) bounced back in its matchup against Illinois State (2-3) on Saturday, as the Hilltoppers hit seven 3-pointers in the second half and picked up an 83-69 victory on the second day of the U.S. Virgin Islands Paradise Jam tournament.

After dropping its opening-round game in the Paradise Jam event, WKU played its second game in less than 24 hours. The Hilltoppers stepped up by outlasting the upset-minded Redbirds in the UVI Sports and Fitness Center in St. Thomas, U.S. Virgin Islands.

“Well, the biggest concern you have to be concerned with going into a game like this is not letting last night’s game cost you two games,” head coach Rick Stansbury said postgame. “It very easily could have happened. In that type of game last night, it was a tough loss for us. But give our guys credit, they came out and had to overcome some adversity in the first half.”

WKU shot 54% from the floor, made 11 of 19 3-pointers and outscored the Redbirds 47-32 in the second half alone. For the second consecutive game, four different WKU players reached double-digit scoring totals.

The Hilltoppers also shot much better from the free-throw line against the Redbirds, as they shot 18-of-21 from the charity stripe throughout the contest.

ISU became the second team this season to outrebounded the Hilltoppers, defeating WKU 32-26 on the glass.

The Redbirds also passed the ball efficiently, as they led the game with 15 assists, compared to 12 dished out by WKU.

Senior guard Ricky Torres led the Redbirds with 15 points in 29 minutes of play. Redshirt junior Keith Fisher III came off the bench and added 13 points, while leading the team with eight rebounds in just 19 minutes of play.

“Illinois State is a really good team,” Stansbury said postgame. “As I said coming into this game, and you guys witnessed last night, I thought they were better than Cincinnati. They were harder to defend because those perimeter guys are so quick off that bounce.”

ISU struck first in the ball game when Hillsman sunk a 3-pointer. The Redbirds started the game on a 7-0 run after Hillsman and Copeland hit a pair of 3-pointers in the first 1:31 of action.

The Hilltoppers didn’t score their first point until 1:55 into the game when redshirt junior forward Carson Williams hit the first end of his two free-throws.

The Redbirds were up 9-1 in the early minutes of the game until the Hilltoppers picked away at the ISU lead with a 7-0 run.

Justice scored five points during the WKU scoring run, and after only scoring five points in WKU’s 77-75 loss against Bowling Green on Friday night, he surpassed that total by scoring eight points in the first six minutes against the Redbirds.

Sophomore center Charles Bassey picked up his second foul with 11:24 remaining in the first half, forcing Stansbury to sit him for the rest of the opening period.

With Bassey being sidelined for over 11 minutes of the first half, ISU was able to outrebound the Hilltoppers 22-13 during the frame..

The Hilltoppers were forced to play with a smaller lineup for the remainder of the half and the Redbirds took advantage by increasing their lead to 26-18 when Copeland knocked down a midrange jumper at the 6:44 mark.

After a late blitz, WKU only trailed ISU 37-36 at the halftime break.

Justice led the Hilltoppers in the first half with 11 points, three assists and a pair of 3-pointers.

ISU showed a 2-3 zone in the first half, which slowed down the Hilltoppers’ fast-paced offense.

The Redbirds came out of halftime and immediately scored in the first seven seconds of the half to increase their lead to 39-36.

Seconds later, Justice knocked down his third 3-pointer of the game and tied the game for the first time at 39-39 on his first attempt of the second half.

The Hilltoppers took their first lead of the game when redshirt senior wing Jared Savage sank a 3-pointer to score his 1,000th career point between his time at both Austin Peay and WKU.

After only hitting four 3-pointers in the first half, WKU hit three straight shots from behind the arc to start the second half, mounting a 45-41 lead at the 17:38 mark.

WKU stretched its lead to 51-43 at the 14:37 mark when Savage knocked down his second 3-pointer of the second half.

The Hilltoppers pushed their lead to double-figures for the first time of the game at the 9:28 mark when junior guard Josh Anderson knocked down a pair of free throws to make it a 63-53 game.

Rawls hit his third 3-pointer of the contest to give the Hilltoppers a commanding 70-55 at the 7:15 mark. Rawls ended the game shooting 4-of-6 from behind the arc.

WKU took its largest lead of the game at the 4:51 mark when Williams swished a pair of free throws to give WKU a 74-57 lead.

The Hilltoppers maintained a double-digit advantage for the remainder of the second half, as Stansbury emptied the bench and allowed freshman forward Isaiah Cozart, redshirt junior guard Patrick Murphy and freshman guard Jackson Harlan to check into the game.

WKU eventually finished the game off, defeating the Redbirds by a 13-point margin to earn their second-ever win against ISU.

Following the win, WKU will meet Fordham (4-1) on Monday afternoon after one day’s rest.

The game will be streamed live on FloHoops.com.