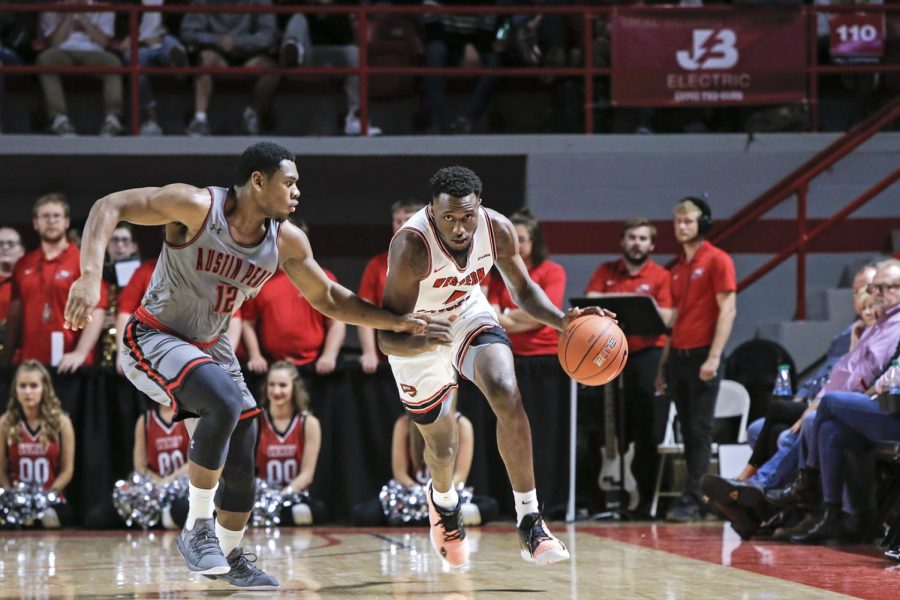 WKU junior guard Josh Anderson (4) dribbles the ball down the court against Austin Peay on in E. A. Diddle Arena on Saturday, Nov. 9, 2019.

The WKU men’s basketball team (2-0) picked up its second consecutive victory to start the 2019-20 season by defeating Austin Peay (1-1) 97-75 on Saturday afternoon in Diddle Arena.

The Hilltoppers shot 60% from the floor and made 26-of-29 free throws against the Governors. Each player in WKU’s starting lineup reached double figures in scoring, combining for 76 points.

The Governors were out-rebounded 37-28, but they collected 20 offensive rebounds, compared to WKU’s 12. APSU outscored the Hilltoppers with points in the paint at 34-32.

On Tuesday night, WKU’s bench only scored 10 points. However, the Hilltoppers’ bench had 21 points against the Governors, and Stansbury loved the improvement he saw out of his bench players.

“There are some areas we need to get better in,” Stansbury said postgame. “Overall, I thought we got better play from our bench. That starts with [Jordan] Rawls. He gave us 22 minutes at the point and that helped Taveion [Hollingsworth] some.”

Freshman guard Jordan Rawls had eight points off the bench, but graduate guard Camron Justice led the Hilltoppers on Saturday afternoon with 22 points, while shooting 8-of-10 from the field.

“I’ve gotta keep the mindset of playing more aggressive,” Hollingsworth said postgame. “You know, sometimes I come out unaggressive and I try to switch it on. Most players can do that, but I’m not that type of player. So, I have to have that mindset for the entire game.”

Hollingsworth scored the first bucket of the afternoon with an easy lay in, coming off an entry pass from Justice. Redshirt junior Carson Williams scored just 34 seconds later to give the Hilltoppers an early 4-0 advantage.

Justice scored seven of his 17 first half points before the first media timeout at the 14:37 mark.

The Governers struggled to score the ball for parts of the first half, as they went on a scoring drought of over five minutes. APSU missed on nine straight possessions before sophomore center Matheus Silveria ended the streak by banking in a shot just above the free-throw line.

WKU expanded its lead to double-figures for the first time of the game at the 6:31 mark when Williams picked up an offensive rebound and scored to give the Hilltoppers a 28-18 lead.

Tensions flared with just over six minutes left in the first half, as Bassey and sophomore guard Antwuan picked up a double-technical after the two got tangled up at mid-court.

The Governors showed a 2-3 zone for parts of the first half, but the Hilltoppers didn’t have much trouble finding the shots they wanted.

Justice knocked down his fourth 3-point shot of the half at the 2:52 mark. He was also fouled and converted the four-point play for the second time this season.

The Hilltoppers went on a 9-2 run to close out the half, but WKU struggled to rebound the ball in the first half, as the Hilltoppers allowed APSU to pick up four straight offensive rebounds in its final possession of the half.

WKU outrebounded the Governors 21-16 in the first half, but APSU picked up 10 offensive rebounds, compared to the Hilltoppers four.

The Hilltoppers went into halftime with a 41-25 lead after shooting an even 50% from the floor in the first half. 25 of WKU’s 41 points came from behind the arc or at the charity stripe.

WKU opened the second half scoring three straight layups, coming from redshirt senior Jared Savage, Justice and Hollingsworth. The Hilltoppers quickly expanded their lead to more than 20 by scoring on their first 4-of-5 possessions.

APSU played a full court press for parts of the second half, but WKU kept its lead right at 20 points for most of the second half. The Governors were able to cut WKU’s lead to just 15 points at the 10:52 mark, but that’s the closest APSU would get.

After shooting 44% from distance in the first half, the Hilltoppers shot the 3-point ball even better in the second half, reaching the 70% threshold.

The Hilltoppers stayed consistent offensively in the second half, scoring 56 points second half points while shooting 69% from the field.

Following the win, WKU will be back in action against Eastern Kentucky on Friday evening. The Hilltoppers and Colonels will square off in Alumni Coliseum at 6 p.m.