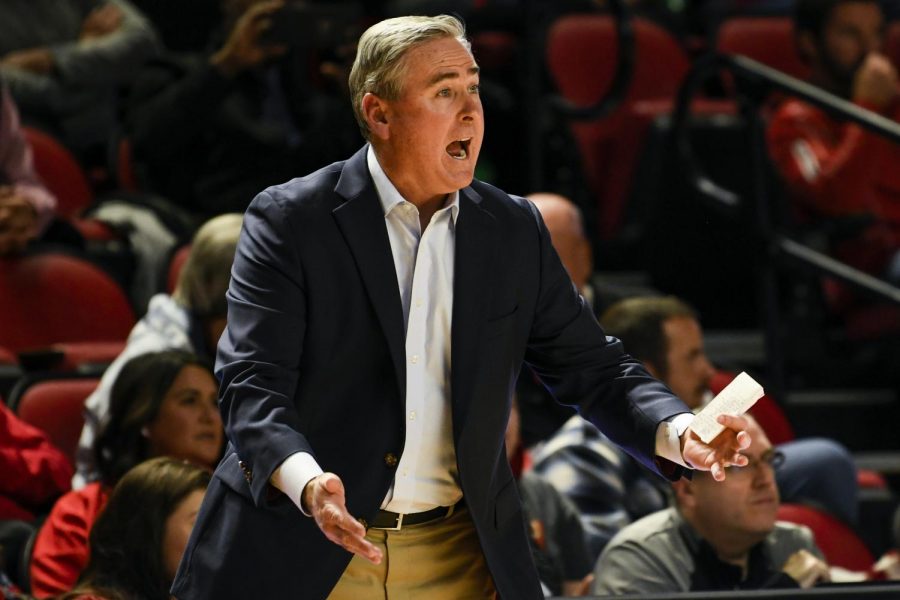 WKU head coach Rick Stansbury communicates with his players from the bench during the exhibition basketball game between Kentucky State and WKU in Diddle Arena on November 2, 2019. WKU won 85-45.

A group of four double-digit scorers guided the WKU men’s basketball team to a demanding 85-45 win over Kentucky State in the Hilltoppers’ first exhibition of the season on Saturday.

Head coach Rick Stansbury said he used the exhibition game against the Thorobreds to give his players a chance to lose any early season jitters and as a time to see different rotations on the court before the regular season begins on Tuesday night.

Stansbury played 11 different players in the Hilltoppers’ win on Saturday, and nine of those players were able to pencil their names into the scoring column.

Stansbury bragged about how his entire team continued to play hard-nosed basketball while being up by more than 20 points for most of the game.

“You know, the thing in the second that I really liked about our team, we were up 22 at halftime, it’s very easy to come out [in the second half] become selfish a little bit, maybe not share the ball as much, maybe not play as hard,” Stansbury said postgame. “But the thing that stands out to me, we came out in the first eight minutes of the second half and went on a 26-8 run. I like that, and that’s the way you need to come out.”

During WKU’s 26-8 run to begin the second half, redshirt junior forward Carson Williams electrified Diddle Arena by scoring 13 straight points for the Hilltoppers. The Owenton native gave WKU a 55-21 lead before a media timeout at the 13:33 mark of the second half.

“Coach mentioned at halftime in the locker room, ‘Don’t let up, come out with a lot of energy,’ ” Williams said postgame. “So, you know, that’s just what I tried to do.”

Williams transferred from Northern Kentucky and joined the WKU program in the fall of 2018, but he was forced to sit out for the entirety of the 2018-19 season to satisfy NCAA rules.

Williams used his official Hilltopper debut against the Thorobreds to show WKU fans his wide array of abilities by recording a double-double with 18 points and 10 rebounds in 26 minutes.

Stansbury said the constant energy Williams showed against Kentucky State is a common theme that his teammates have grown accustomed to in practice.

“He’s one of those players who goes through you. He has that kind of toughness about him, but no question, when you have a player like that, it gets contagious. Maybe the next time, if there’s a loose ball out there and there’s a guard, they’ll lay out and go get it.”

The 6-foot-5, 230-pounder said he was relieved to finally get back on the court and lose his first game jitters after being sidelined for the entirety of last season.

“It’s been over a year and a half since I’ve had someone to play against other than these guys in practice every day, so it was nice to go up against somebody else,” Williams said. “It felt great to be back on the court.”

Stansbury said during WKU basketball media day on Oct. 25 that adding Williams to the lineup this season will bring a different dimension WKU has been missing since losing All-Conference USA First Team performer Justin Johnson to graduation in 2018.

Johnson was known for his toughness during his four years at WKU, and Stansbury said he believes Williams brings a similar kind of mentality to the floor.

“There’s no question about that,” Stansbury said. “He brings it every day and every possession. Whenever that shot is taken, he thinks it is his rebound. That’s a great ability to have.”

Williams and the Hilltoppers will be back in Diddle Arena Tuesday night for the start of the regular season against Tennessee Tech. The last time the two programs met up was in 2002 at the Rainbow Classic in Honolulu, where the Hilltoppers defeated the Golden Eagles 74-51.

The Hilltoppers lead the all-time series 81-20 over the Golden Eagles.

The Golden Eagles were projected to finish last in the Ohio Valley Conference Men’s Basketball Preseason Poll released in October, but Stansbury said Tennessee Tech has progressed and will be much improved after an 8-23 finish last season.

WKU comes into Tuesday’s 7 p.m. tipoff looking to win its first regular season opener since the 2016-17 season, when the Hilltoppers defeated Alabama State 79-66 in Diddle Arena.

“We need this place for the first game to be packed,” Stansbury said. “For the students who came tonight, we need them all here on Tuesday night setting the tone and the energy they’re going to put into this building, so we can feed off that.”