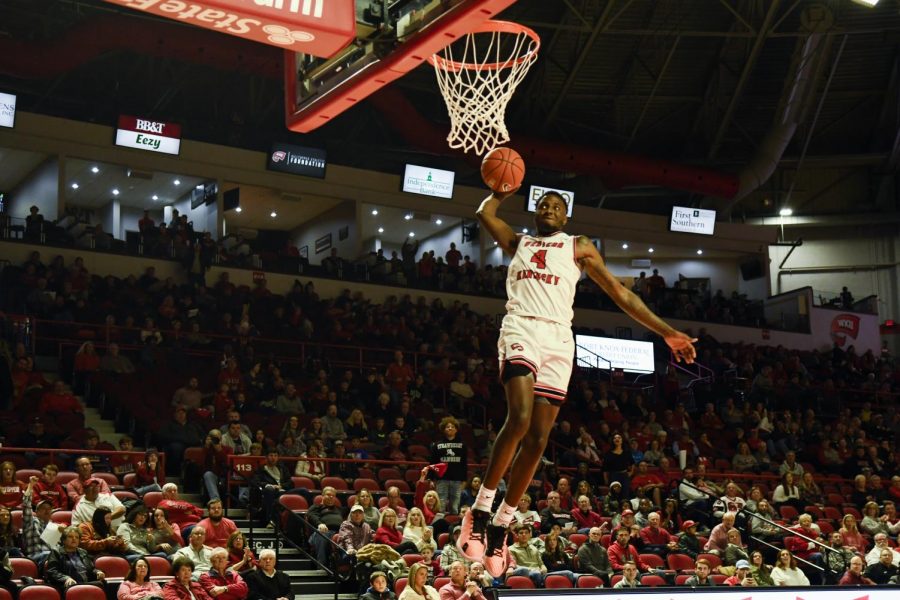 WKU junior guard Josh Anderson (4) goes up for a dunk during the exhibition basketball game between Kentucky State and WKU in Diddle Arena on November 2, 2019. WKU won 85-45.

The 2007-08 Hilltoppers finished with a 29-7 record and advanced to the Sweet 16 of the NCAA Tournament, while the 2006-07 squad finished 22-11 and ended its season by dropping its second contest in the Sun Belt Conference Tournament.

The fate of the 2019-20 Hilltoppers is far from sealed after an undefeated start to November, but the depth head coach Rick Stansbury’s squad showcased during its 79-71 road victory over Eastern Kentucky (2-2) last weekend was a preview of what the team might have in store.

Coming into the year, Stansbury said he believed this could be the deepest team he’s had during his four-year tenure at WKU.

“It’s the deepest and most experienced team, for sure,” Stansbury said. “The last half of the [2018-19] season, we got pretty thin over there on the bench. Sometimes you play guys out of necessity — well, I don’t feel that way right now. We’ve got to avoid major injuries. You have some guys sitting on the bench and you feel really comfortable with.

“Like I said, there’s about eight guys on this team you feel comfortable saying, ‘Hey, they could be starters.’”

Junior guard Taveion Hollingsworth and sophomore center Charles Bassey ran into foul trouble early in the first half against EKU, while redshirt senior wing Jared Savage exited the contest late in the first half with an ankle injury and didn’t return, meaning others had to step up.

With WKU missing three starters for parts of the first half and one for the entire second half, freshman guard Jordan Rawls and junior guard Josh Anderson both answered the bell.

The duo gave the Hilltoppers a huge boost after checking into the contest. Rawls led the Hilltopper bench with 14 points on a perfect 5-of-5 shooting from the field, while Anderson scored 11 points, made nine free throws and tied his career-high with five steals.

The Hilltoppers are ranked 12th in the country in field goal percentage at 53.5%, shooting 50% or better in each of their first three games this season.

Although he has been a rotational player so far, Rawls has still made major contributions to the WKU offense, leading the Hilltoppers in field goal percentage at 71.4%.

Rawls shot 10-of-14 from the field through his first three games, so the four-star prospect wasn’t surprised to be one of the first ones thrown into the fray against EKU.

“I feel like I’m getting adjusted to the college game,” Rawls said. “I’ve kind of gotten my feet wet, so I’m feeling pretty good going into the next game.”

While the WKU offense is running on all cylinders to start the season — scoring 84 points per game and only trailing for a total of 3:21 in its first three contests — the Hilltoppers are still looking to get Hollingsworth more comfortable playing point guard.

Hollingsworth started 72 games while logging a school-record 2,563 minutes during his first two seasons as a Hilltopper, but he has had his most success when playing shooting guard.

This year, the Hilltoppers are relying on Hollingsworth to run the point until the program receives an official decision from the NCAA regarding the eligibility of senior point guard Kenny Cooper, who transferred to the Hill from Lipscomb in April and submitted a waiver to play immediately.

This is not uncommon for the Hilltoppers, as Hollingsworth took on some of the responsibility at the point while former Hilltopper Lamonte Bearden was ineligible last fall. Hollingsworth also played point guard at times as a freshman.

Stansbury said Rawls has provided Hollingsworth with some much-needed relief at the point guard position, especially in the absence of Cooper.

“We need someone else who can play that point, and Rawls is someone we have great confidence in,” Stansbury said. “The mistakes he makes is because he’s a freshman and there’s a learning curve with all of that.

The meeting with Stansbury’s alma mater was a late addition to the Hilltoppers’ schedule, but it counted as a campus-site game of this week’s U.S. Virgin Islands Paradise Jam tournament.

The in-state matchup between WKU and Campbellsville — which WKU claimed in a 109-66 blowout — was the Hilltoppers’ final game before their road trip to St. Thomas, U.S. Virgin Islands, where WKU will play three neutral-site games on Friday, Sunday and Monday.