Election Day 2019: Follow along for updates on the gubernatorial election 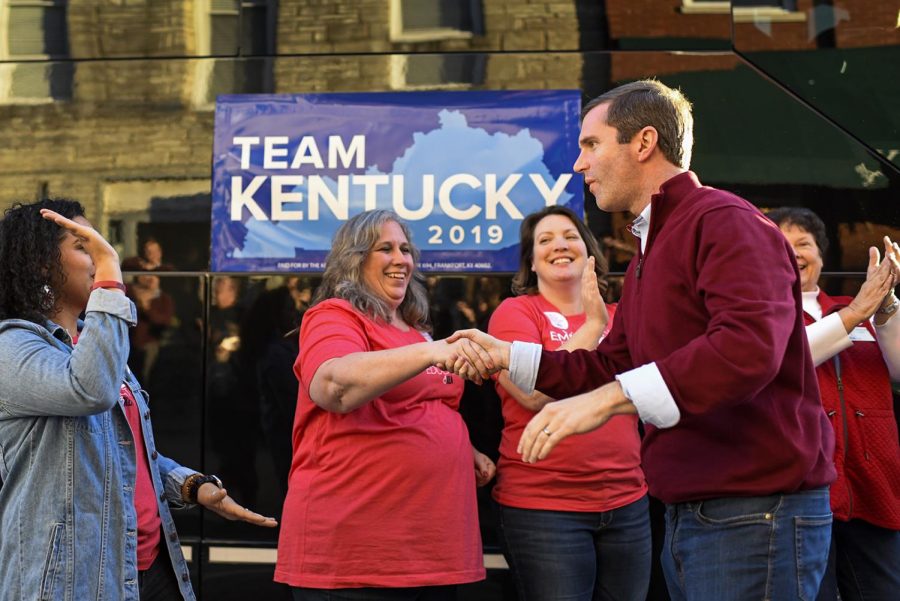 Andy Beshear shakes the hands of his supporters as he gets off his tour bus at a campaign stop in Franklin on the day before elections, Monday, November 4, 2019. Beshear hopes to beat Matt Bevin as the democratic candidate for Governor.

The polls are set to open at 6 a.m. on Tuesday morning as Kentucky decides whether it will keep incumbent Gov. Matt Bevin or elect Democratic candidate and Kentucky Attorney General Andy Beshear.

The Herald will have constant coverage of the election throughout the day as the polls open and close, and as results come in.

Keep up with the latest stories below.

What voters are saying as they exit the polls

As polls close in the eastern region of Kentucky, voters have been voicing their concerns with Kentucky politics and their reasons for voting in this year’s election.

Less than 12 hours before the polls open in Kentucky, President Donald Trump held a rally in Lexington, hoping to turn the tide in favor of Republicans in what is expected to be a tight gubernatorial race.

While there are several elections on Tuesday’s ballot, including attorney general, secretary of state and agriculture commissioner, local and national attention has been fixed on the fight between incumbent Gov. Matt Bevin and Attorney General Andy Beshear. Some recent polls show a tight margin, or even a tie, between the two.

Trump strongly encouraged voters to support Bevin, while citing his hard work and progress in the state.

A crowd of protesters, many wielding signs, began to gather at the Fayette Circuit Court and on West Main Street hours before the rally began.

Beshear stops in Bowling Green prior to election

Beshear made a pit stop in Bowling Green on Monday, which was one of his last campaign stops before the election. The attorney general rallied for support as he said that he would make sure Kentucky honors its pension obligations to public employees. He was joined by State Rep. Patti Minter and other Democrats.

“I was born and raised right here in Kentucky,” Beshear said. “I love this commonwealth, and I know that we have more that unifies us than will ever tear us apart.”

Chants of “U-S-A” and “four more years” rained down from supporters as Trump endorsed Bevin for re-election. Trump emphasized the need for his supporters in Kentucky to get out and vote.