Gatton student proves age is no obstacle to an early graduation 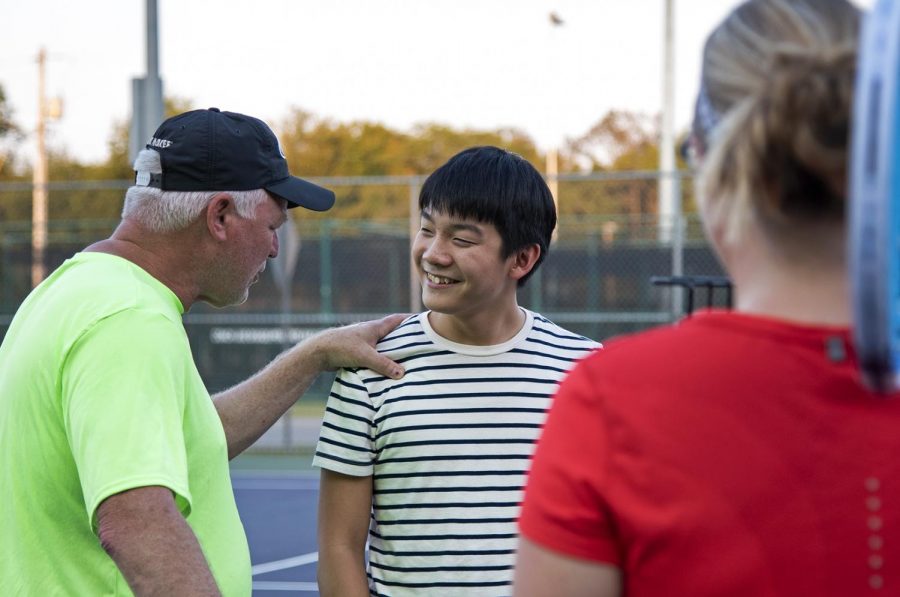 Samuel Chang talks with his tennis coach, Rob Balge, during his weekly tennis lessons at Kereiakes Park on Sept. 29, 2019. Tennis is the first sport Chang has ever played, and Balge said he can really see him improving so far.

Samuel Chang looks like most high school students. At 15 years old, he’s still growing into his lanky limbs, and he isn’t quite as tall nor as deeply voiced as his college-age peers.

As a first-year student at the Gatton Academy, Chang is on a non-degree-seeking path at WKU. He will earn high school diplomas from Gatton and Bowling Green High School in the spring of 2021, and he will likely be considered a junior by credit hours whenever he begins college the following fall.

Though Gatton mandates its students take between 16-19 credit hours per semester, Chang wants more. If it were up to him, he’d turn the academy’s two-year structure on its head.

“I feel like I’m a bee buzzing around everywhere,” Chang said, noting the hectic nature of his academic pursuits.

With one glance at a color-coded document which serves as Chang’s academic schedule for the next two years, it’s easy to see why he might feel like the always-on-the-move insect. However, despite his best efforts, Chang will graduate from Gatton on pace with all other first-year students.

“I want them to see themselves as more than a test score,” Breedlove said. “They need time to be part of a community.”

“He seems to be very devoted,” Chin said. “I don’t know where he got the energy or the commitment.”

She said it might be Chang’s sense of honor which motivates all he does. Or perhaps it came from years of going above and beyond — Chang skipped first grade and said some of his earliest memories come from completing math worksheets his mother gave him as additional work when homework wasn’t enough.

Aside from studying math economics at Gatton, Chang keeps himself busy with activities such as teaching Bible study and ACT prep classes and practicing piano and tennis. He said he can’t study one subject for more than two to three hours at a time, which makes his list of extracurricular activities appear to be never-ending.

A talented pianist, Chang was a student at the Kentucky Governor’s School for the Arts, and he won the 2019 KMTA junior piano competition. On Sundays, Chang leads a Chinese church congregation, Living Hope Chinese Ministry, in worship through music.

He said one of his main purposes in life is his love for God, which more specifically drives his involvement in church activities. Chang also teaches an elementary-age Bible study for the congregation, which meets at Living Hope Baptist Church.

“There are two things that drive me: the pursuit of knowledge and the love of God,” Chang said.

He teaches an ACT prep class at Bowling Green Junior High School on Friday afternoons, as well, noting interaction with students and helping them learn is very important to him. If jobs in education paid more, Chang said, he would probably be a teacher.

Though he eventually plans to earn a doctorate in his chosen study of math econ, he has no definite plans to this point.

What is certain is Chang is scheduled to graduate from high school next spring at just 16 years old. Until then, his commitment to progress speaks for itself.

Features reporter Katelyn Latture can be reached at [email protected]