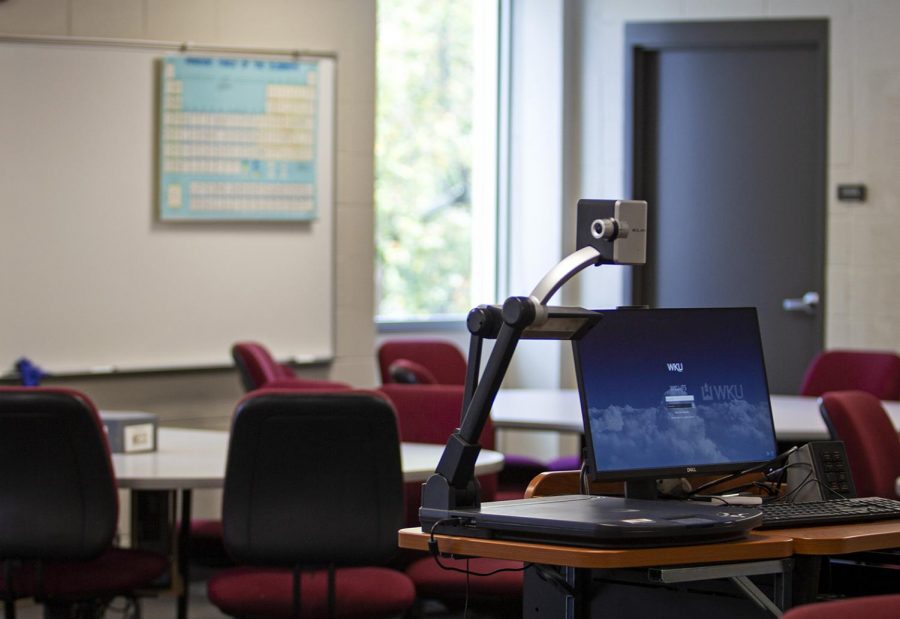 When the doors reopened in Kelly Thompson Hall before the fall semester after 18 months of extensive renovations, all eyes were fixated on the new dynamics of the building.

One of the biggest aspects of the renovation was the inclusion of new “active learning classrooms.”

“We want students to be able to do physics and work together,” said Doug Harper, a professor at WKU. “We know from research on physics education that students will do better [physically] doing than listening to an instructor. These rooms were designed to have spaces where it’s easy for students to sit next to each other and work together at the round tables we have.”

The new classroom features include projectors on two walls, round tables and power hubs located on the tables to charge laptops.

The biggest classes that are taught in these new classrooms are courses in university physics, biophysics and some general education astronomy courses. However, not all science courses fit in the three classrooms.

“We still have to teach in Snell Hall and other rooms,” Harper said. “But we try to move as many classes in here as we can.”

“The desks are terrible,” Kaitlyn Pasley, a freshman who takes a mathematics course in a traditional classroom in KTH, said. “I can focus in the classrooms, but I feel like we should have bigger desks. I can barely fit my notebook and my calculator on my desk.”

Many universities, such as Vanderbilt University and Cal State University, have started converting traditional STEM classrooms into active learning classrooms.

“This approach isn’t really new for us; we’ve been doing this since 2000,” Harper said. “We had smaller rooms, half as big as they are now. We reached a point where classes couldn’t fit in there anymore. We didn’t have the type of facilities we wanted. We talked to several people and convinced them.”

This different approach to traditional classrooms is looking to have a positive impact on students.

“One of the things I find most interesting [is] on the first day of class there is no back of the classroom,” Harper said. “There is no way to get away. It takes students a little while to get used to the environment, but I have seen that students really like it and enjoy the opportunity.”

The renovation had an authorized budget of $9.6 million. Along with the creation of the three active learning classrooms, the building received an HVAC replacement, new lighting and a new elevator.

News reporter Cassady Lamb can be reached at 270-745-6011 and [email protected] Follow her on Twitter at @lambp0p.