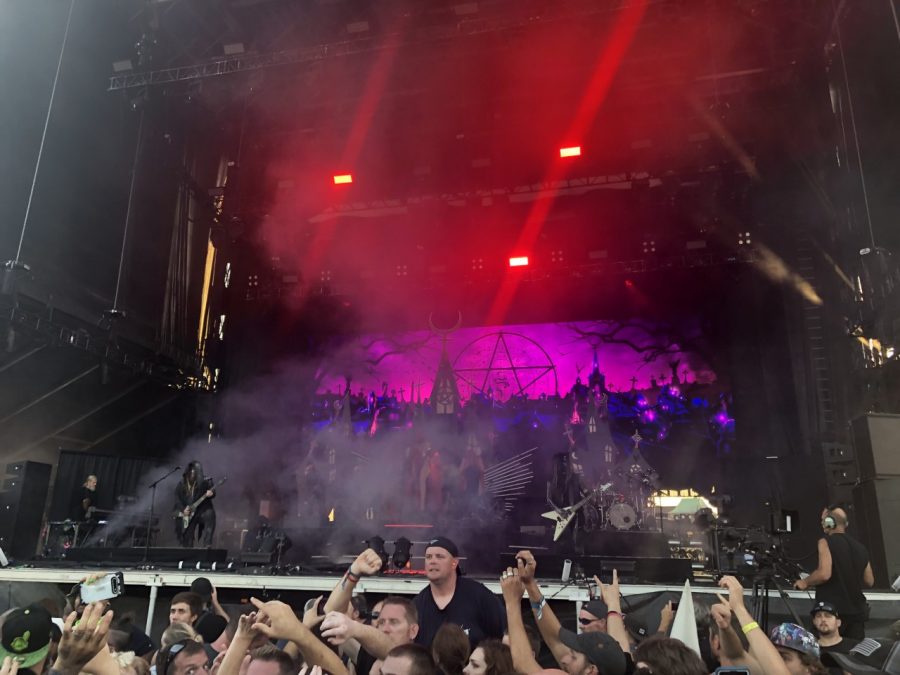 Audience members watch a fan crowd-surf during In This Moment's set on Sunday afternoon.

Sunday afternoon was a scorcher ⁠— a sizzling 95 degrees ⁠— but this didn’t stop headbangers from flocking to the Highland Festival Grounds near downtown Louisville for Louder Than Life, a local rock festival now in its sixth year.

From the sound of the first band, full audiences and loud cheers were common in front of every stage. Louisville’s very own White Reaper kicked the day off at the Oak Stage, where the young Derby City natives made their first appearance at the three-day festival.

White Reaper keyboardist Ryan Hater wore a dated University of Louisville Football practice jersey on stage and immediately got the crowd involved. He even gave a shoutout to his father, who was in the audience ⁠— a gesture of gratitude from the humble rocker.

At the set’s end, lead vocalist Tony Esposito thanked all of the local support for showing out in great numbers before extending a shoutout to fellow Louisville-area natives Knocked Loose, which performed Saturday at the festival.

Pop-punk legends Sum 41 took the stage not long after the Louisville heroes ended their set. The crowd significantly increased, and a buzz was clearly in the air as anticipation grew.

Crowd surfing, circle pits and hands in the air were everywhere as Sum 41 put on an incredible display of energy and rock ‘n’ roll. The iconic punk-rock hit “In Too Deep” provided the set’s peak, a delight for everyone who grew up to the sounds of 21st century alternative rock.

Other notable bands to take the stage were Three Days Grace and Breaking Benjamin. Both bands have gained a cult fan base since their heydays around the early 2000s.

To end the night, horror-rock icons Marilyn Manson and Rob Zombie dominated the two main stages. Wicked, elaborate stage shows thrilled crowds of thousands spanning near the back of the grounds.

Smoke, fire, a plethora of light and extravagant video boards were put on display by the two legendary performers. Metalheads got their fix to the tune of loud drums, thumping bass and no shortage of crowd craziness to top off an incredible display of showmanship by the veteran frontmen.

Even beyond the music, what meant more was the pure happiness visible on every face present.

And above all, music fanatics from across the area had the chance to unite for one common goal: to have a good time and rock out without a care.