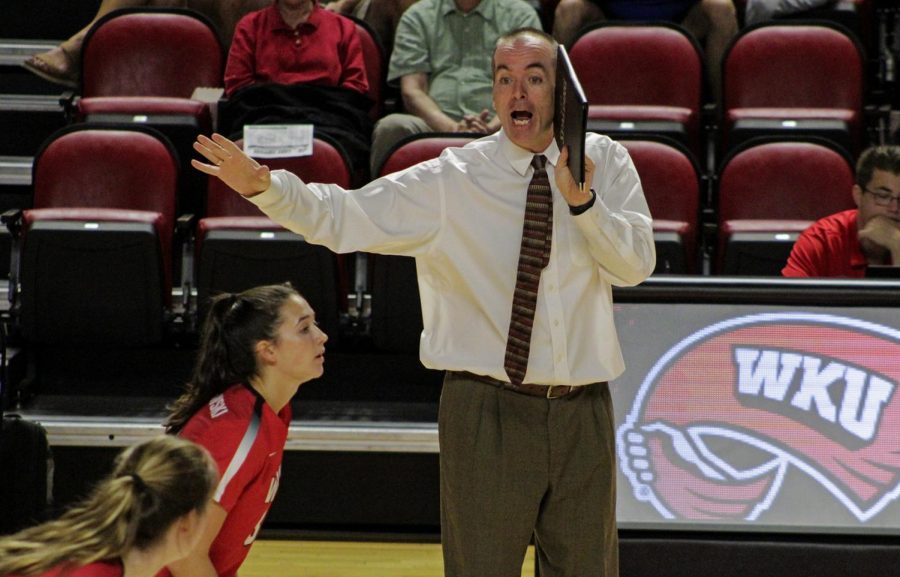 WKU head coach Travis Hudson yells for his back row to make an adjustment during the match with Southern Miss in Diddle Arena on Sunday, Sept. 29, 2019.

The WKU volleyball team (15-1, 1-0 C-USA) extended its winning streak to 11 straight matches last week, as the Lady Toppers tallied a pair of clean 3-0 sweeps against Austin Peay (4-12, 2-0 OVC) and Southern Mississippi (0-14, 0-2 C-USA) with the help of their home-court advantage in Diddle Arena.

The Lady Toppers have now notched 11 sweeps this season — the best mark among NCAA squads.

“We have a chance to be really good, and we are approaching it,” head coach Travis Hudson said on Sunday. “Today was a big step backwards, but a big step backwards with a win is kind of what you hope your step backwards to be. But we have to be better. A week from now we’ll have to be way better than we are. We have our rival Middle Tennessee coming in on Friday and a really hot, really good Marshall team coming Sunday. So we have a week to be better, and we will be.”

The Lady Toppers defeated APSU in straight sets, avenging their close 3-2 loss to the Governors on Oct. 16, 2018 in Clarksville, Tennessee.

Senior Sophia Cerino — the Division I women’s volleyball leader in both service aces and aces per set as of Sept. 27 — totalled five kills and four service aces against APSU.

After claiming their final match prior to conference play, the Lady Toppers hosted Southern Miss in their first Conference USA matchup of the season on Sunday afternoon.

Southern Miss eliminated WKU in the first round of the C-USA Tournament last year, which meant the Lady Toppers were looking to repay the Golden Eagles for ending their season prematurely in 2018.

WKU started out slow in the first set, trading the lead back-and-forth with Southern Miss. The two squads traded the lead six times throughout the set, and the game was tied 12 times.

Sophomore Lauren Matthews tallied seven kills and two out of the last three points in the frame to help the Lady Toppers pull away and ultimately claim the opening set, 25-23.

“Southern Miss really came out prepared,” junior transfer Nadia Dieudonne said postgame. “They were on top of their game plan, played great defense, and they were running their offense. I don’t think we were there mentally.”

The second set started much like the first, but the Lady Toppers settled in and took control after Hudson called for a timeout when WKU went down 10-9 early on.

After regrouping for a few moments, WKU went on an 11-2 run to go up by eight points.

Southern Miss went on a quick 6-1 run to bring the WKU lead back down to three, but it wasn’t enough — the Lady Toppers took over once again and eventually grabbed a 25-18 set win.

The Lady Toppers looked their best in the third set and controlled the tempo throughout the entire frame.

WKU went on multiple scoring runs during the third set and held the Golden Eagles to their lowest hitting percentage and total kills of the game at .107 and nine, respectively.

WKU went on to claim the third set 25-17, securing its fourth consecutive 3-0 sweep.

Following a 9-0 start to the season in Diddle Arena, WKU will play its next two C-USA matchups at home this weekend before hitting the road for a three-game stretch in conference play.

The first of the two matches will come against rival Middle Tennessee State (6-9, 0-1 C-USA) on Friday.

WKU is currently on a 12-game winning streak against the Blue Raiders dating back to 2011.

WKU lost 3-1 to MTSU in Diddle Arena on Oct. 4, 2011, but the Lady Toppers got revenge a few weeks later in Murfreesboro, Tennessee, and started their current win streak in the all-time series by defeating the Blue Raiders 3-2 on Nov. 11, 2011.

The Blue Raiders started the 2019 season by dropping their first six games. MTSU has won six of its last nine matches since then, but the Blue Raiders fell 3-1 to Charlotte (10-7, 1-1 C-USA) on Sunday afternoon in Murfreesboro, Tennessee.

WKU will end the weekend against Marshall (11-4, 2-0 C-USA) next Sunday afternoon.

WKU is currently on an eight-game winning streak against the Thundering Herd, and the Lady Toppers also own a 12-2 advantage in the all-time series dating back to Oct. 6, 1984.

Marshall is currently on a four-game winning streak of its own. The Thundering Herd have only given up one set to their opposition since losing 3-2 to Morehead State (11-3, 2-0 OVC) on Sept. 19.

Marshall will play Charlotte on Friday before coming to the Hill to meet WKU on Sunday.

The match between the Lady Toppers and Blue Raiders is set for 6 p.m. on Friday, while WKU and Marshall will get started at noon on Sunday.