Crazy credits: An inside look at WKU’s gun range course 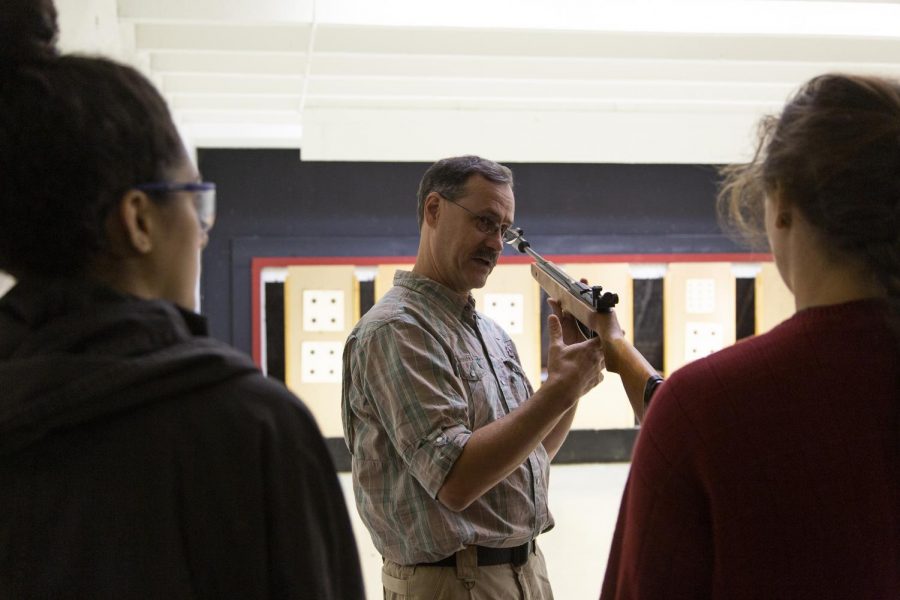 Chances are you’ve parked your car on campus at Parking Structure 1 at least once. Whether or not you know what lies beneath is less certain.

Below the structure is a hidden gun range used by several different groups on campus, including the WKU Police Department, ROTC and a bi-term course called marksmanship. Taught by adjunct professor James Honaker, marksmanship is a physical education class which teaches students how to properly use and take care of firearms.

“Firearms are a part of our lives,” Honaker said. “It is important to know how to handle them responsibly.”

This is the only class Honaker teaches at WKU, which he’s done for eight years. Growing up, he said his family bonded over hunting and shooting, and he even competed in firearm competitions. He is now a certified NRA and concealed carry instructor.

The class focuses on the fundamentals of firearms like the different types, safety, maintenance, handling and storage. Honaker tries to introduce students to aspects of firearms that aren’t commonly discussed such as competitions and mechanics.

The seven-week class begins with lectures in a classroom, where Honaker informs his students about handling techniques and firearm basics before they get hands-on experience. The students next visit an outdoor shooting range called Rockcastle Club and practice with real guns. The last two class sessions are spent at the PS1 gun range, where air rifles are used, as live firearms are not allowed on campus.

The range is a small warehouse with no windows. Students hang up their targets on a wall, get in position to shoot and wait for the signal. Honaker uses proper range calls like “range is hot,” “range is cold” and “ceasefire.” On the other side of the room is a screen where students may use a laser gun simulation for practice. Honaker keeps an eye on everyone and sets strict precautions in place for safety.

“This class exposes students to a new activity in a safe learning environment where they can ask questions if they need to,” Honaker said.

Junior biology major Emily Russ said she finds the class useful and fun, and she thinks more people should take classes like it.

“Some of the biggest causes of accidents are ignorance and carelessness,” Russ said. “Learning the basic fundamentals can keep you and others safe.”

Russ has taken several classes outside of her major, which she said are useful in learning new skills. She saw marksmanship as an opportunity to become more informed.

“College is a time to experiment and learn,” Russ said. “Firearm safety is not something I’ve had the opportunity to learn before.”

Alison Youngblood, an assistant professor in the English department, is currently taking the class. Professors are allowed to take up to six credit hours a semester for free as a part of their benefits, but they still have to pay class fees. Youngblood tries to take advantage of this at least once a year.

“During the first three classes, I could feel my blood pressure increase, because I knew nothing about firearms,” Youngblood said. “I have learned a lot since then.”

From a teacher’s perspective, she said she thinks Honaker has done a fantastic job. Though the class is unlike anything she’s ever experienced, Honaker maintains a comfortable class environment.

“I can see how this class would be difficult to teach,” Youngblood said. “He does not go into politics or anything but instead just keeps the class about the science and sport of marksmanship.”

Honaker said there are four tips all his students must know:

Those four tips, no matter what level of experience, can save your life.